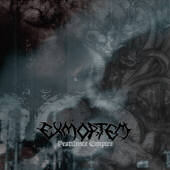 Exmortem may not be as original or unique as some of the other bands that lead the modern death metal movement, but I’ll be damned if Exmortem doesn’t do what they do well. “Pestilence Empire” is their third full-length album, and their first with label Osmose Productions. If you like your death metal uncompromisingly brutal, chaotic, and technical, “Pestilence Empire” just might be the right album.

Exmortem’s arrangements are heavy and brutal for the entire duration of “Pestilence Empire”. There isn’t a moment where they let up. Riff after riff, the semi-complexity and brutality quickly surrounds the listener and just pound on your ears with each song. The music is pretty strong, and fairly well composed. The songs themselves usually have enough energy and shifts in tempo to keep the listeners attention fixated on the music. Exmortem also manage to throw in a few unique ideas despite the fact that they’re playing a largely generic style.

Believe it or not, melody is what keeps Exmortem’s ship afloat. After listening to “Pestilence Empire” enough times to the point that you can hear all the ideas clearly and concentrate on them, you’ll notice that it’s that slight melodic element that keeps Exmortem interesting. “Pestilence Empire” isn’t limited to playing at breakneck tempo the whole time, nor have they hindered themselves by being a band that can’t seem to hold onto an idea for more than a few seconds.

The only real large problem with Exmortem is their lack of variety. All the songs on “Pestilence Empire” tend to sound very similar. This is caused by the lack of breathing room that Exmortem leave you, and that the music itself, while most of it is usually fairly well done, doesn’t tend to have a quality that makes it stick in your head. In fact, I managed to catch some of the riffs being re-used in slightly different variations. Some smaller problems would be that the drumming tends to be very one dimensional, and the production makes the ideas on “Pestilence Empire” come out somewhat unclearly.

Bottom Line: “Pestilence Empire” may not be original and unique, but Exmortem do what they do well enough that to most people it won’t matter.