For all of the time they’ve been around, Denmark’s Exmortem has been recieving promising feedback from fans and such, while still never breaking into being one of the more talked about bands of the underground death metal genre. However, things have been getting better for the band ever since they started, and as we can see by them signing to Osmose Productions, only good things are in store for these guys. Recently I discussed issues surrounding Exmortem and their new album,"Pestilence Empire," with guitarist Sigtyr. Here is what he had to say: 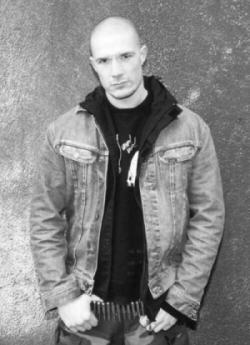 First and foremost, "Pestilence Empire" managed to put a smile on my face (or an evil grin, whichever you prefer). Congratulations on the fine work you’ve done!

First off, could you give the readers a brief overview of Exmortem’s history and how you we got to where we are today?

Sure! The band was started in 1992, by some friends of mine, but I didn’t play guitar at the time so I wasn’t in the band back then. In 1993 they recorded the first demo called "Sould Of Purity" and the band was called Mordor. In 1994 they recorded the debut album "Labyrinths Of Horror" and it was released in mid 1995. A few months before the release I joined the band and we came up with the name Exmortem. After that we recorded a couple of demos/promos and in 1998 the second album "Dejected In Obscurity" was released. Shortly after we recorded "Dejected.." we decided that we could no longer work with our drummer at the time, so we got a new one and with him we recorded a promo and two songs from that tape ended on a split 7" in 1999. But again there was trouble in the line-up so the drummer and singer got out and we got Reno and Simon instead and with that line-up we recorded "Berzerker Legions", but at this point original guitarist Kolle had got pretty tired of the whole thing, which also meant that I made most of the music for "Berzerker.." and recorded all guitars on the album. So again there was trouble and at the same time Reno decided that he wanted to go to the US, so I pretty fast found Michael and Andreas (drums and Bass (first real bassplayer in the band..)) and with them, Simon and myself we have made "Pestilence Empire"…and no one have left yet [laughs]!

Are you happy with how "Pestilence Empire" has turned out in the end, and is there anything you would change about it now?

I’m really satisfied with it, I think that we have made our best album and that we have succeeded in developing our style compared to earlier releases and that must always be the main goal, to make something better and take it a step further. We went for a more organic and darker sound on this album, because we wanted to get away from the very clinical and triggered sound that so many use and that is surely something that we will continue with. I guess that I could find some things to change if I wanted, but this album is done and I don’t really care to bother thinking too much about things that could have been done different. I’m satisfied with the result as it is now and will start to think about that kind of stuff when we are ready to make some new material.

When comparing "Pestilence Empire" to Exmortem’s older material, what do you consider to be the traits that make your latest work superior to the others?

There are a lot of things I would say. The basic riffs, the song-writing (structure etc..), the vocals and of course the production. I also think that with tracks like ‘Pestifer’ and ‘Icecold Ugliness’ we have incorporated some new elements compared with older material and we will of course try to take stuff like that further on the next release. I also think that we play more like a band than ever before, even with all the line-up changes, so I really look forward to see where we can take this! 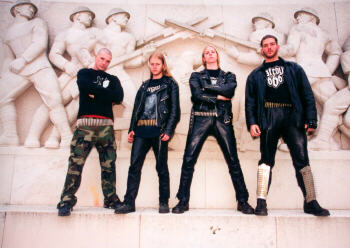 What is the concept behind the new album "Pestilence Empire"?

The title is very much related to my personal view on this world! All the lyrics deal with the way we see the world and the people that lives here. I can feel really disgusted when I see how people think and behave around the world, it sickening!! So I have written lyrics about those subjects. This is a very misanthropic and negative vibe throughout all the lyrics and we try to express that through the music and visual aspects as well.

The cover art for the new album is quite excellent! What’s the deal behind that?

Thanks man. It’s very much connected to the lyrical concept and I have tried to make it fit with the whole atmosphere on the album. In the booklet there are actually two "extra" covers and a lot of other stuff that is meant to help building up the right visual concept. It’s not just four pages with lyrics and a thanks list!!! I will work a lot more with this stuff in the future as well, also for other bands!

In what ways has Exmortem improved over the course of its career?

We have become more and more focused and motivated. We have become much better musicians and are working on a more professional level (in studio, live and so on…) You learn a lot from your mistakes and I guess we have made our part [laughs]!!

Is there any specific goal that you guys try to reach when writing an album? Do you guys just shoot to make some ripping death metal or is it beyond that?

I’m very focused on what I want when I start to make new material, especially on the last two albums, because I have taken care of most of the material for those. But we have started to talk a bit about the next one and I got some riffs and Andreas got some riffs as well, but we will have a pretty clear idea about what we want before we start to put anything together! But you know, there is also room enough for improvisation and sometimes it can also depend on the kind of riff you make, cause some stuff just have to be played fast and so on...

"Pestilence Empire" is your first record with Osmose Productions, correct? How have they been treating you guys so far?

Extremely well I think! We have had a very good cooperation so far and I think that we can do a lot for each other!! They have good promotion and are working on some tour stuff, so I think it’s great! 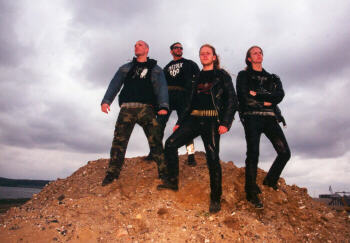 I know it’s kind of early to say, but what’s in store for the future of Exmortem?

First of all we want to get out there and play some live shows (a lot!!) It’s my highest hope that we will also get the chance to play the US, but I guess it’s pretty expensive so we will see! We are also working on some video stuff and hope to shot it in February or so!! Apart from all that I’m working my ass of to promote this album and I hope that we will soon start to make some new material as well!

How is the metal scene in Denmark? Are you guys one of the only bands leaving the death metal mark?

The scene here is weak as always, but it seems that the more easy listening part of the scene is getting stronger and there are a few bands lately that have signed to some bigger labels like Nuclear Blast. But I don’t listen to that kind of music, so it doesn’t change the scene in my eyes it’s still weak and there is only a handful of bands that have anything to offer in my eyes! We hope that we can inspire some youngsters to play some more extreme music than the usual death n’roll, nu-metal, melodic etc…we could need that here!

I tend to pick up traces of black metal when I listen to "Pestilence Empire" (albeit small amounts). Am I completely off base here or what? What influences do you and the rest of Exmortem put into the music?

I guess you could be right there, cause we all listen to black metal as well, but I don’t normally think about that when we make music. I guess that we have adopted some of the cold and raw atmosphere that some of those bands have.

That’s about all I have for you at this time. Again, you did an excellent job on "Pestilence Empire". Do you have any last comments you’d like to leave the metalbite.com readership with?

Thanks a lot for the interview and the support! I hope that the readers has gotten interested in the band and you are hereby invited to check out our website and the MP3’s that you can find there from the new album! We have some other projects going on at the moment and I’m working on some other stuff as well, so look out for news on this on our website too! Cheerz