Enforsaken formed in 1998 as most of new coming acts went through ups and downs in its young career to one of the most recognized bands from Chicago area. Their first EP called "Embraced By Misery" caught not only our attention but also most of Chicago's promoters that resulted with countless shows where Enforsaken have shared the stage with bands like: Shadows Fall, Dismember, Vader, The Haunted, Witchery, Immolation, The Crown, Kataklysm, Catastrophic, Krisiun, Origin, to name a few. Without long overdue here’s what guitarist Steve Stell had to say about the band and their upcoming album.

Tell us about the history of the band-how it all began, where, when, etc.

Well, Lets see. Enforsaken was formed in Chicago back in the winter of 1998. Back then the band was just a two-piece. Myself on guitar and vocals and Pat O'Keefe on drums and vocals. Enforsaken was just supposed to be a little side project from both of our other bands, but it soon turned into a full time endeavor. We got some other guys to round out the line up. We're now a five piece. Pat is no longer in the band. He was replaced by Dave Swanson in the spring of 2002. Dave also plays in Veneficum. So that, in a nutshell, is our history.

How would you describe your music to a new listener, who's never heard you before?

Aggressive, melodic, extreme metal. I'd also say that we're a little bit more European sounding. When I tell someone that I'm in a death metal band, sometimes they automatically assume that we must sound like Cannibal Corpse or our singer sounds like he's barfing into the toilet. That's not the case with us. I'd also say if you're into bands like Arch Enemy, At The Gates, Death etc. then you might like Enforsaken.

Who writes music and who is the primary lyrics writer?

Steven, our singer, writes all of the lyrics. I only wrote one lyric on the "Embraced By Misery" CD, 'Into The Everblack'. Steven writes all of them now. As for the music, it's usually Joe and I, but we all contribute ideas, work on arrangements, tempos etc together. We all play an important part in the songwriting process. Sometimes we fight about things, but in the end, things get sorted out for the best.

What response did you get after the release of your first CD; was it what you expected or hoped for?

The response has been overwhelming, to say the least. When we recorded "Embraced by Misery", we intended it to only be a demo. We didn't expect to move a few thousand copies of it. Right after we self released the first batch of CDs, we were offered a deal with the European label LifeForce. They pressed a couple more thousand copies. Now we have signed to WW3 Music and they are releasing it again. It will hopefully sell many more with proper USA promotion. We didn't expect this. We've gotten great reviews of the CD in all of the major magazines and have gained tons of fans over the year since it was released. I think we're off to a good start. We're definitely not complaining.

What was the best show that you guys ever played and what was the craziest thing that happened that stuck in your memory (not necessarily the same show)?

Hmm, Let's see. Lots of shows have good moments. I guess the best was with Dismember and Shadows Fall. It was just a huge honor to play with Dismember. We're all big Dismember fans. We played a show not too long ago with Dead To Fall in Chicago. That was a good one. No real crazy shit has happened yet. No chicks throwing their bras onstage, no autographing of tits... no riots. Maybe at our next show I’ll play in the nude. That would be a real crowd pleaser for sure. My hairy ass and gut on display. Yeah, everyone come to our next show. I won't disappoint you! I might urinate all over the fucking crowd too! That would be pretty intense, huh? 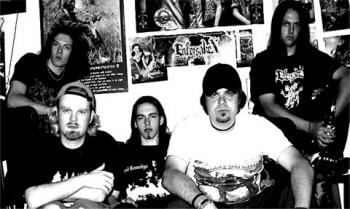 What is happening with the band nowadays?

We're just writing the next CD. We need to write two more songs, and then we'll be off to the studio. We're shooting to get back into the studio in March 2003. Hopefully, if all goes well, the new record will be out in the summer.

It will be along the same lines as "Embraced..." but, with a few different twists here and there. I think it's going to be a lot more 'Musical'. It's still going to be very extreme and rockin', but at the same time, more moody. I can't really describe it. I think it's just a natural progression from the older material. I think that anyone that got into the first CD will really like the next one... hopefully!

Who is going to do the graphics for the upcoming release?

Hopefully Carlos Holmberg again. I really like his work. It's not for sure yet. Before we had total control over things like that, now we have a contract that says we can do such and such. We'll see what WW3 has in mind for us. If they can come up with something cool, great. They have a good graphics guy over there, so whatever the case, the new CD art should look good. We're definitely not going to settle for a half assed art job.

Where can we come across your merchandise, such as CD's, T-shirts and stuff like that?

You can check www.enforsaken.com. That's the best place for shirts and other merch. If you search the web, you can find our CD at a lot of places. Lots of distros carry it. Relapse, Red Stream, LumberJack, Amazon.com etc. You can find some of our shit on EBay once in a while too. We're actually almost sold out of our band supply. We have like 8 copies left right now. WW3 will be re releasing "Embraced By Misery" in March 2003. However, it will be now titled "Into The Everblack". This is due to legal reasons with our former label.

Do any of the band members have any side projects/bands that they are working with?

Dave is the singer/bassist in the black metal band Veneficum, Joe also plays guitar in Avidost. They're sort of an Opeth style of band. Steven and Eric are always doing some sort of project with other bands. My only band is Enforsaken. This is the only band that I'm interested in. One band is more than enough for me nowadays. I used to be able to play in 3 bands at once, but I ended up spreading myself to thin. I'm 100% focused on Enforsaken these days.

When are you expecting to have the new album to be released?

Hopefully in the summer of 2003. We're going to record it in March, but it is up to WW3 as to when it gets released. Hopefully it won't get delayed.

Are you planning on including any cover songs on the new album?

Maybe. We were thinking of doing a Dismember or Edge of Sanity cover. We were also thinking about covering something off of Darkthrone's "Soulside Journey". I'm sure we'll do some sort of cover. They're always fun to do.

How many songs do you have ready at this moment?

Roughly six new songs. That and a lot of riffs that are floating around.

How does it feel to be recognized at different shows and having people asking about the band and your music?

It's always nice. It's good to talk to the people that really enjoy our music. It's cool.

Any last words for the Metal fans that will be reading this?

Tom, thank you for doing this interview with me. You're a hell of a guy. Everyone please visit www.enforsaken.com and sign our guestbook. Feel free to use lots of profanity.