If life were as simple as sex, booze and metal, wouldn't it be such a great world? According to the men behind I.N.R.I., these were the main tenets that helped create the extreme metal creation known as "Hyper Bastard Breed". Henri (vocals) enlightened me about the history of I.N.R.I., how "Hyper Bastard Breed" is making waves in the world, but most importantly about what really makes I.N.R.I. tick. 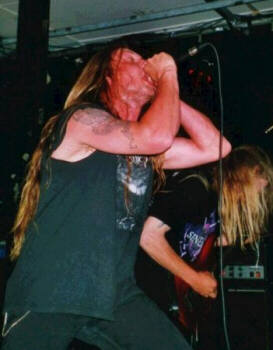 "Hyper Bastard Breed" is your new album and 'hyper' is a great term to describe the music behind it. Ripping through 15 tracks of 1 to 3 minutes in length, listeners surely won't get bogged down in epic tracks or acoustic melodies that are all too common in metal, right?

No, we are too fucking evil for that! Within our music there is no place for things like acoustic guitars or keyboards, not now, or in the future. Under the banner of I.N.R.I only the real hard stuff will be recorded.

You guys really blew me away with this album. I was a tad skeptical at first, before hearing this album (as I always am with unknown bands), but after I listened to the entire album the first time I was like 'Whoa!' The second and third consecutive times were even better! This is a damn cool album man! You ought to be really happy with it!

Thanks for the compliments, and you are right, we are absolutely happy with the album.

Is I.N.R.I. going to be touring to support this little beauty of an album? Do you have a target country to market "Hyper Bastard Breed" to most effectively, or is this an album more of something for yourselves, and not out there to break record sales?

There are many shows planned here in Holland, for example one with Deicide and another with Exodus. At this stage touring is too fucking expensive for us but maybe in the near future.
The best market for metal is Germany and we absolutely want to crush some skulls over there but we are not interested in breaking record sales. It is something we like to do for fun, not for the stupid money.

You started out as Stigmatheist in 1994 and released an album titled "It All Ends Today". Is Stigmatheist different from I.N.R.I. as it stands today, and could you let us know how the change came about?

Stigmatheist was a bombastic metal band (right, with keyboards!). Not to be compared with I.N.R.I. The band fell apart and two of the members, namely William and Patrick who sang in Stigmatheist and now rapes the six-string, sought and found the three new members. From the beginning it was very clear that this had to be a very extreme, thrashy style band because of where our roots lie. A different game, a different name: I.N.R.I.

Clean vocals. What are your take on them? Please tell me I.N.R.I. won't be another band that incorporates the clean singing into their music, I don't think I would be able to handle it...

Should I sing clean, the birds will fall dead from the sky. Believe me, it isn't a thing you want to experience! I am loud as hell within the band but also outside the band. My fucked up throat never could stand a clean note.

I.N.R.I. is the acronym for Insane Non-commercialised Rock Institute. Interesting name, what is the story behind it? Why not stick with Stigmatheist?

The real acronym is: Iesus Nazaraeus Rex Judeao, which is what Jesus of Nazareth, King of Jews means. It was a sign above the head of the crucified Christ where the acronym was carved in. The acronym you mentioned is how we feel about our music. Stigmatheist is the past, a book happily closed! 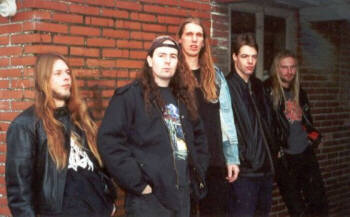 "We raise our glasses high to those who supported us with sex, booze and most of all metal." That's so true. What else do you need in life, eh? The loving of a good woman, a few pints of beer and a couple of tunes cranking in the background and you're set for life.

Probably the shortest answer I have ever given: it is all we need to live in life!

"What aspect I really admire about these guys is the fact that they don't dick around with wispy little ambient introduction pieces that many death bands are opting for nowadays. They are a death metal band and you will get death metal songs. No tinkering with keyboards, no acoustic melodies, just flat out thumping riffs with gnarly vocals. I.N.R.I. play each song and then move on to the next song, with breakneck speed all the way through. For me this is what stands out the most. That and these guys can really play." - This is part of what I said in my review of "Hyper Bastard Breed". Do you think this is an accurate statement about you guys and the album?

Yes, each song we play is really hard work and very intensive! The song at first may sound a bit simple, but beneath the surface lies quite a bit of technique caring with the thundering beats and hyper speed. We don't label ourselves a death metal band, we rather call ourselves an extreme metal band because of the diversity of styles within our sound.

I can name three of my favourite songs. Those would be the title track 'Hyper Bastard Breed', because of its intensity in the middle part of the song, 'The Resonance of Triumph', a song written during jamming together and its fucking brutal, and the third would be 'Spawn of Abraham', because it's one of the coolest songs to play!

You are surely a born and bred death head, but I also feel there is a fair bit of black metal influences here. You sound as though as you could be equally as well suited to rasping along with Marduk or some of the hybrid black/death bands. Thoughts?

You are quite right! In the past I also sang in a black metal band, and I still like the scene, but the music has to be relentless. One of my favourite black metal bands is Satyricon. Goddamn what cool shit they produce!

"Kill and destroy all bands who are sliding off the Death, Black and Trash scene under the motto: "We have developed, we're adult now!" Without guilt they are destroying what our metal godfathers slightly built up. Those semi-intellectual philosophical hippy-like mother fucking wimps must be killed!" Those are pretty strong words there. Is I.N.R.I. a nihilistic band that wants to destroy? I do agree that the amount of bands who state that they are 'maturing' and 'breaking the mold' to better themselves musically is getting a bit ridiculous. I mean why did the hell do these types of bands start playing metal in the first place?

Those are merely words, but do express the way we feel about those wimps. I am a moderate nihilist, within music and outside the music I strongly believe that people who do not contribute in a way whatsoever in life, haven't got the right to exist. They are users - nothing more nothing less. 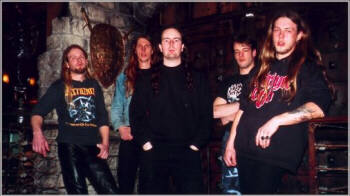 I've seen a lot of good reactions to this album from many dudes in the metal press. Are you happy with how people have reacted to this album?

Yes, the reactions have been overwhelming. We never expected this at all. These are things that chill you and thrill you.

Can I ask why you left Voices of Wonder for Cold Blood Industries?

With Stigmatheist perished, there was no deal left, and C.B.I offered us a deal and we gladly accepted. We know the people behind the screens very well and it was nice to be respected by them.

How does the I.N.R.I. collective function? Who writes the material for your songs?

Well, Patrick writes most of the music, the main ideas come from him, together we melt the stuff into a song. I am responsible for the lyrics though.

Tell me about the lyrics for "Hyper Bastard Breed". What separates them from the rest of the death metal 'rat pack'? Do they have religious connotations at all?

I really do not know if they are different. I just write with heart and soul. They absolutely are anti-religious in all its forms. I plead for one thing only: to live! And to live you have to trust yourself, believe only in yourself. I am proud to say that I am an egoist and a realist. Men have to follow their instincts more often, we all are beasts you know, but we have the ability to choose direction and take responsibility for that. These are themes I put in my lyrics.

That is all I have for you at this stage. Thanks for the answers, and more importantly I am very grateful for this good slab of metal you have provided us with. Stay metal!

Thanks for you interest in I.N.R.I. and to all out there: the only way is your own way - the righteous way! Check us out on the internet at www.move.to/inri.
Stay fucking Metal!