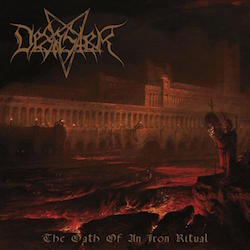 "Space cake, space cake, space cake / Eat it, eat it, eat it!" - I am sorry for the crude introduction of this review, but the rumbling beginning of 'Conquer & Contaminate' reminds me of Protector's "Space Cake". Desaster unleash hell on earth after 30 seconds and the pounding brutality of this tune seems to be slightly inspired by the early works of Wolfburg's flagship in terms of extreme metal. Yet "Space Cake" was more or less a musical joke, but 'Conquer & Contaminate' comes as a regular track and its excellently flowing chorus illustrates the high degree of Desaster's musicianship. This chorus is a powerful, angry monster that sinks its teeth deeply into the listener in a matter of seconds. Totally unexpected, seemingly awkward yet pleasantly shocking bass breaks increase the level of harshness. It would not come as a surprise if this kind of utilization of a bass guitar was invented in Tom Angelripper's rehearsal room during a booze-up in Summer 1983. Be that as it may, the solo part also leaves no wishes open.

Desaster are back and it's good to hear new songs of the fathers of German black thrash. It was a long way from "Grillhütt' Desaster", their first concert, to the here presented album and Infernal sees no reason to modify the style of his formation. I guess that his farts are still stinking intensely, but his compositions haven't lost any of their intensity as well. The band uses the well proven tools to realize its vision of true metal and the guys do it in an experienced manner. Without drawing heavily on their back catalogue, Infernal and his comrades open fire. Admittedly, the main riff of 'Damnation Ad Bestias' was formerly known as the riff of 'Sacrilege', their classic which was released on the fine Stormbringer EP. The marginal difference between these riffs is negligible. Yet apart from this exception, Desaster avoid any form of recycling. Instead, the well-established team generates an atmosphere that lies between their most brutal album Angelwhore and their remaining works. Heavyweight and ironclad, these attributes describe their style and the production as well. This does not mean that every single song is a killer. 'Proclamation In Shadows', for example, suffers a little bit from a comparatively merciful ending. Therefore, The Oath Of An Iron Ritual is not able to challenge the most impressive outputs of Desaster's discography, but it is also far away from damaging the reputation of the formation.

Now a completely different thing: do you like espionage? Well, it depends. Spying for my country is good and necessary, no doubt about it. Spying against my country is, it goes without saying, despicable and a crime. More or less the same applies for predictability. If "false metal" bands release an album that provides more of the same, I blame them for their predictability. If authentic combatants like Desaster publish a new work that runs in the same vein as their previous offerings, I praise them for their reliability. (This term sounds much better than "predictability".) Due to Desaster's clear definition of real metal, it goes without saying that they cannot make great stylistic maneuvers. Consequently, all of their musical trademarks show up: galloping riffs, furious outbursts, dynamic tempo changes, demonic and vigorous vocals, precisely thundering drums and, of course, neither female vocals nor keyboards. By the way, did I already say that the guys are a very reliable partner for their fans? Reliable, of course, not predictable, please accept the fine difference...

Nevertheless, I miss a usually mandatory element of their sound on The Oath Of An Iron Ritual. There are worse things in life, but the album doesn't score with some medieval melodies. Instead, the protagonists present a limited set of atmospheric parts. I also miss some castle ruins in the booklet, but I am just too conservative. Forgive me for being an old-fashioned grumbler. However, the band covers the whole range from straight torpedoes ('The Cleric's Arcanum') to pretty complex creations ('Haunting Siren'). Therefore, the verdict is clear: The Oath Of An Iron Ritual enriches the discography of these men of conviction. As long as the band stays loyal to its form of metal, it is a matter of honor to stay loyal to Desaster.