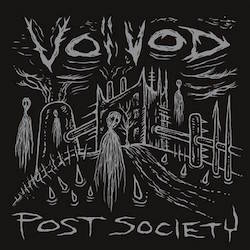 What is there to be said about Voivod that hasn't already been said? A band I believed to be done after the untimely death of Denis "Piggy" D'Amour in 2005. How could this band move on without one of the most unique and original guitarist that's ever picked one up? For a few years they released material Piggy had recorded and arranged it themselves. Then they hired guitarist Daniel Mongrain (Chewy) and hired back original bassist Jean-Yves Thériault (Blacky), began playing live shows again in 2008 and released the masterful Target Earth in 2013. Exit Blacky, enter Rocky. After a couple successful tours and a couple 7" splits with At the Gates and Napalm Death, Voivod is set to release their new EP Post Society.

Post Society is a 5 song EP containing their two songs, "We are Connected" and "Forever Mountain", from the above mention splits, 2 new songs the title track and my personal favorite "Fall" as well as a cover of Hawkwind's "Silver Machine",which serves as tribute to fallen comrade, Lemmy, even if that was not the original intention. These new songs see the band in all it's weird glory.

Most fans are already familiar with songs contained on the splits, the 3 that are new along with those 2 further the Voivod legacy. Continuing on their sorta return to form on Target Earth, I don't know that they ever strayed, they make a thrashy, proggy release full of all the discordant beauty that is Voivod. From the Opening title track to the Hawkwind cover to close it out, Voivod sway in and out of aggressive punkish thrash, off beat prog moments and weird diminished chords that are the staple of this band.

It's amazing that over 30 years later this band continues to release material of this magnitude. Although I would have preferred a full-length release, Post Society's 30 minutes are more than fair. It also contains "Fall" which I consider to be the best post Piggy song. Voivod continues to push boundaries, challenge listeners and be one of the most forward thinking bands in metal.