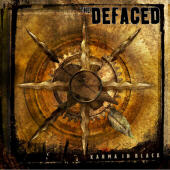 Type: Full-Length
Release Date: 2003
Label: Nuclear Blast
Genre: Groove, Thrash
1 Fumes From The Swamp
2 Once In Between
3 10 vs 9
4 Exit Body On Mass
5 Beneath My Swirl
6 A Moment Of Clarity
7 The Fading Suns
8 Soulsides
9 Forever Winding
10 Karma In Black
11 World Wide Hysteria (Bonus Track)

Out of all the bands in and around the huge plethora of metal scenes, I truly believe The Defaced is one of metal's brightest stars. Here we have a band that is gifted, (and I mean really gifted) with a knack for nutting out a catchy, yet precise and interesting brand of metal for the masses.

"Karma in Black" is effort number two from these five lads, and to cut straight to the point, it is a record that you -want- and -need- to pickup. Each of these lads play their material with such authority and mastery that it makes other records that I listen to week in and week out feel so hollow. It is an almost a clinical art of playing metal listening to "Karma in Black," not in the way that the record might feel sterile and/or forced, but that these guys have given their all into "Karma in Black" making it sound as though it is the peak of metal playing perfection. Nary a note or chord is out of place.

Musically The Defaced play an explosive sound of thrash mixed with some contemporary metal from their nu-metal peers. By nu-metal, I mean the crispness and great sounding production that these guys from the USA are blessed with on a record-by-record basis, not necessarily the ultra fat chugging guitar riffs. Vocalist Henrik Sjiowall has one of the more distinguishable voices in the metal fields; a strong and commanding harsh voice, and then he often switches with an equally commanding, but more subdued clean voice for choruses and the like.

The Defaced, along with bands such as Construcdead are possibly the future talent of the metal scene. Both acts combine rich, crisp and fluid guitar solos, with an incredible knack of knowing what their audiences want in a song. Along with ultra-catchy vocals and intense songwriting they come up with two killer albums in "Repent" and the aforementioned "Karma in Black." Acts like these need to be heard, they are yet to receive half the attention they deserve.

Bottom Line: "Karma in Black" is possibly one of the most exciting releases of 2003 for me thus far. There is not a bug or scratch to be had with this record. The Defaced combine years of experience along with an intensity yet to be heard since Soilwork exploded onto the scene some years ago. If you miss, then well it will be a shame.