Even though they boast members of both Darkane and Soilwork, The Defaced want to make it clear that they are just not some hastily assembled side project! In fact, The Defaced are completely the opposite. With "Domination Commense," the band unveiled their potent mix of modern American metal and catchy Swedish licks to the metal underground. Now with their sophomore effort, "Karma in Black," The Defaced refine their sound and take the groove, the intensity, and the melody a step further. I recently had the chance to speak with the band's guitarist and co-song writer, Mattias Svensson, on the new album and more. 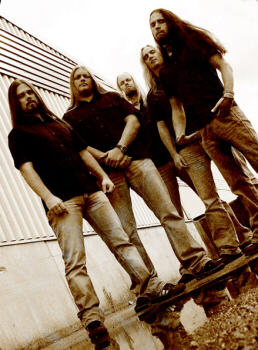 I would just like to start right off by congratulating you guys on the high acclaim of the your debut album "Domination Commence." Your new album "Karma in Black" is already receiving large amounts of praise from various metal magazine! How does it feel hearing that stuff when the album is only on the verge of its release?

Oh you know it's really cool because when we write the stuff we just go for the gut feeling of writing what we like playing and what we feel that The Defaced should like that. It's really that is comes across that we hope it will. Of course, it's really, really cool if people like it but, on the other hand, if they don't we are still doing what we want to do. I'm very happy about it.

Well it has to be a relaxing feeling. Some bands send out promos and seem to get a little backlash, but it must feel good that the album is not even out yet and it is already getting good feedback.

Yeah, yeah, yeah definitely. Especially about this one because the license between Scarlet and Nuclear Blast for "Karma in Black" wasn't finished in time so the initial press time was way shorter than it was supposed to be. It was only like a month and we usually want like three months to work the album. I was a bit nervous that the promos would not reach the magazines in time but on the other hand, now when we are doing interviews the album is going to be out. I mean it is released in the States tomorrow.

Yes I noticed that actually. Usually Americans get upset when they hear that they have to wait longer for a CD to come out than other countries do. We always seem to be the last ones. This time it is opposite. How did that come about?

I don't know actually. I think it's that... when we had mastered the album and we sent copies to Nuclear Blast. We have to send everything to Scarlet in Italy first so they handle all the shipping of the masters to the licensed labels but we sent a copy to Nuclear Blast and they were totally psyched and wanted to release it as fast as possible. I guess it was sort of a demand from them to be able to release the album as soon as possible.

That has to be quite reassuring for you then...

Yeah and that is just my theory though you know but it's quite logical that it came around like that. I know the Japanese Soundholic wanted to... they are going to release the album April 2nd and in Europe it does not get released until April 14th.

Now I remember thinking the first time I heard you that you had to be an American band. Even though I was familiar with Soilwork and Darkane, I still sensed the American metal influence amongst the melodic overtones yet you guys seem to be creating more of your own sound with this new release. What was the goal of this record going into the studio as far as the sound goes and do you think you achieved it?

Yeah, you know when we started talking about the second album we didn't actually sit down and plan a whole lot of things. We just sort of took the parts from "Domination Commence" that we liked the most and sort of went with that. We all just let it happen. No planning. We just sort of went with the flow. On the other hand, production wise, we had a lot of stuff that we weren't pleased with "Domination Commence" and we set up production meetings if you can call it that and discussed what the goal would be like. We decided upon a fat, pounding sound and quite hard-hitting but also a natural sound so when we recorded the drum tracks we decided to use only natural ambience for the drum kit, no reverbs, no triggers because it's more dynamic to work with the natural ambiance. It is also a bit trickier because it is less controllable. 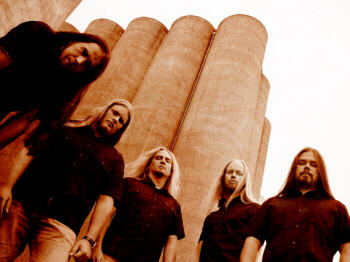 The drum sound was one of the first things that stuck out for me actually. I liked the fact that it sounded a bit more live and had better acoustics.

Yeah I think so too because of course you can use triggers to get the punch in every kick...

But when you have Henry Ranta behind you do you really need it?...

Precise! Yeah! He is... so no use using triggers. It's better to use his dynamics instead.

This album was written in a relatively short amount time. Your debut was released not too long ago. What is the general writing process for you guys and who are the main contributors?

The music is written by me and Klas and I also get the question, "Is it hard to keep the different styles from the different bands apart?" The answer to that is no it isn't because Klas does not write that much for Darkane. For "Expanding Senses" he only wrote like two songs so I guess he gets his musical expression out in The Defaced instead. I think that the writing process was something like 8 or 9 months for "Karma In Black" and we tend to take our time with the songs and work through the ideas real thoroughly to make the most out of each basic idea. Since me and Klas produced this album, the whole production was an extension of the song writing in the creative process. It was really cool to be able to follow the songs real closely and watch them develop the way we had in our heads.

I think a lot of good work was done with the vocals and choruses. They are still heavy but a little more melodic as well. Was that something you guys wanted to focus on while making the record?

We felt that, like I said, to take the parts from "Domination Commence" that we liked the most and as you there are no really super fast songs on this one. As well as that with the melodies we wanted to focus on the things that we thought that we could do the best. We had a lot great ideas that we wanted to pursue so we just went with the flow.

What is the significance or meaning behind the title "Karma in Black?"

Not at the point when we decided upon the title but in retrospect I guess it pretty much sums up all of the lyrics on the album actually. I don't know if that's something that I made up in my own head but if you listen carefully to the lyrics and the meaning that we put into the title "Karma in Black" I guess you can say that "Karma in Black" pretty much sums up every title or every lyric on the album. "Karma in Black" for us is that once in a while or perhaps quite often, everyone is affected by darkness in one's life. Sometimes the dark and bad stuff that you see and you ever think will happen to and instead of being absorbed by the dark stuff in your life, use them as a strength to help overcome them. The lyrics for the song 'Karma in Black' is quite contradictory. There are contradictions all the way through the lyrics. So I guess what does not kill you makes you stronger... you know that old saying? That's "Karma in Black!"

You guys had a chance to play some shows in Europe for the last record. How did those shows go? Any tour highlights that you can recall?

We did a small tour in Holland which was really cool. On that particular tour all the gigs went great and we got a lot of good reactions from the crowds. We also had the chance to hose Klas down one night with a fire hose so that was fun! 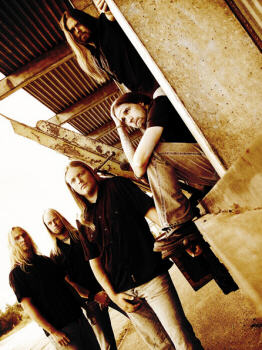 I know it may be too soon to tell but are there any talks of you guys heading out on the road anytime soon?

There's actually been talk about a European tour starting in August but at this point I think it is a bit too early because there are still some issues that have to be settled. If it comes true, then I think it will be a really cool package so I really hope that it'll happen.

I saw your new video the other day and I must say that it is very awesome. What was that whole experience like for you and the band? Have you had a chance to see it on television yet?

No, we haven't seen it yet but the whole experience was a lot of fun. It felt like back in your old room in your parent's house jamming to some good music and playing air guitar because you play with a playback when recording a video so it is a bit weird. We had a great time you know and the film crew was really great to work with.

What CD have you gotten recently that has been spending some time in your CD player?

I am in sort of a retro phase right now. I actually bought Guns and Roses' "Appetite for Destruction" the other day...

Man that album never gets old...

[Laughs] no, it doesn't and I wasn't too into it when it came out so that's why I tried it now and I imagine that it is THE rock and roll album. It is really good and I sort of surprised myself by liking it as well.

But it is pretty sad to see what is going on with Axl Rose nowadays though...

Your new album has been in the top 5 of 2003 for quite some time now even making it to the number one spot so congratulations on that as well!

That's really cool man! That's great! I hope it stays in there!

Well it was number one for a couple weeks actually!

Yeah, we had a new mp3 from "Karma in Black" for a while so I guess a lot of people heard some more new songs and started voting!

Well that is all I have ... Any last words you would like to give to the fans?

Yeah check out "Karma in Black!" It is a strong album in my opinion and it is definitely worth checking out. If you are into hard-hitting, groovy modern metal, I think it will fit you like a glove. Also, for the ones that have supported us up to this point... many thanks! You’re the shit!