One thing about this band is certain, you'll never receive same thing twice. During The Kovenant's career they never released same music twice and with "SETI" the trend continues. For some it's a good thing but for some metal fans that's unacceptable. From black metal on "In Times Before The Light" to cyber/industrial "SETI," the Kovenant surprises, shocks or disgusts but like mad scientist never stops in a search of new forms of sounds. I had a pleasure to talk to one of those mad scientists in his computer laboratory about their new creation and here's what Lex Icon (vocals, bass) had to say. 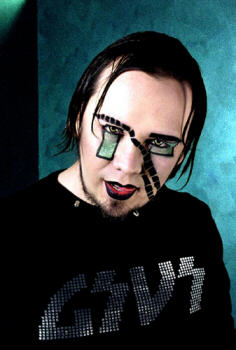 It's been almost 4 years since your last release, what took you so long and what have you been doing over that time?

Last year you re-released "In Time Before The Light" and for people that didn't know Kovenant in '95 this might be quite a music shock. Was it your or label idea to reissue this album?

No, they really didn't want to have anything to do with the album. [Laughs] You know, when we recorded this album we were 16-17 years old, that's ten years ago. We paid for everything ourselves and we ended doing everything we wanted to do with that album. The production was a little bit poor and . I thought about this as a great opportunity to redo the thing and make it as sort of ultimate edition but mainly we did it for ourselves.

Where does this cyber/electronic fascination come from? Do you still keep track of what's going on in the metal scene or did you cut the cords with your past? For example do you now what Dimmu Borgir is doing nowadays or you could care less?

No, I talk to them everyday. I know they're going into the studio to record a new album, I pay attention and I still listen to metal but the thing is when we did "SETI" we really wanted to do something different comparing to so many black metal band these days. I really don't have any inspiration toward making black metal anymore. I also grow up listening to 80 pop music like Alphaville, Depeche Mode, bands like Duran Duran and I wanted to incorporate some of that electronic 80s into the music and still keep it metal.

Comparing first and last release how would you describe the drastic change in the music style?

Very, very different. "SETI" is so much more mature version of The Kovenant. I think the greatest difference is the vocals other than that we're still extreme. When we recorded the first album we were more or less a black metal band but things progressed. We've been doing it for over 10 years, people change. Except if you play in Mayhem [laughs].

What's the idea and meaning behind the title "SETI"?

"SETI" title reflects upon seeking towards something greater than ourselves. The longing and willingness to explore new paths and to go beyond what's expected norm of our existence. There's also social logical aspect to the album and title. We preach and prophesize and try to highlight the ambivalence that exists in our collective individuality or what people might call a conspiracy theory. It is however in essence of doing "SETI" record, proclaiming and demanding the soul of our world that everything we know is true. And we're strong believers in technology that can be used to recreate, improve and rearrange the old. And that's on all levels; musically, lyrically, visually and conceptually.

Based on the promo material it's also about "proving that God is wrong"?

Well, it's not really about that God is wrong it's always been about that God doesn't exist and never existed. There is no God. Religion is the greatest danger that people face today. Having that message and the kind of music we do at this same time is a great combination to make people think. "SETI" is so much more acceptable in so many ways that I feel it's more of a universal album, potentially for everyone. Some of the music styles on this album are very acceptable to a lot of people and with our lyrics we hope to influence them in some way. Religion is the reason of all wars. 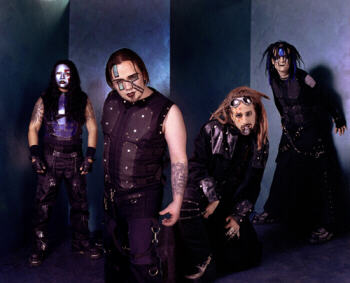 I'd definitely have to agree on that.

We started this whole thing with our previous album "Animatronic" with songs like 'Jihad' or 'New World Order'. 'Jihad' of course was very prophetical about what happened on September 11th and the whole situation. Religion can drive people to do many sick and weird things. Doing it in the name of God doesn't make it right it's still wrong. Religion was created to control people by government or someone who wanted to control people. They're using it because they want you to have a job that you really don't want. You're living a pointless life, you get up at 9 in the morning, you go home at 5 after busy day of work and that's it. Maybe you'll have a beer, watch some football or some pointless thing and deep inside you'll realize that this is actually pointless and it doesn't bring you anywhere. That's why these people had to invent religion to make you believe that ok, if you do this now you'll have a better time when you die. And that's why the new album "SETI" opens up with a song 'Cybertrash' that's about people that are so terrified that they might disappear when they die, cause there's nothing. I mean, would you die for something that someone else created? Hell no, when you die there is nothing, that's it. That's what the whole album is about, to search for extraterrestrial intelligence. We couldn't find any intelligence down here so we have to look elsewhere.

You have two new members, are the permanent or just session musicians?

Angel is a permanent member since 2000 he's not on the new album although he contributed with some parts here and there but he's a permanent member now. Eric was never supposed to be a part of the band. He was just someone we brought in to the band to help develop effects and programming stuff. He was more of a sound designer. He came in because we knew he had a lot of experience in the electronic music field and we really wanted to bring someone in who understood that more than we did and he did an excellent job.

Who's the female that gives her voice on couple of track?

Her name is Allin. She's a professional opera singer at German House of Opera. She never worked with any metal or hard rock band before "Animatronic" album. She didn't have a clue about metal or The Kovenant but I set down with her and talked to her about it and I asked her if she'd be willing to participate on the album. She did a very great job and she really enjoyed the music. She's not the part of the band though [laughs].

In your own words how would you describe the music style you perform now?

I really don't care. You can call it whatever you want. Some people call it nu-metal, some people call it gothic metal, and some people just call it black metal. The main idea behind the whole record was to combine the old classical, beautiful music with hard and dirty machine like stuff, for example the song 'Industrial Twilight,' the last one on the album, where you clearly have the symbiosis between the two. If I had to categorize it I would call it electronic cyber metal [laughs] or something like that. 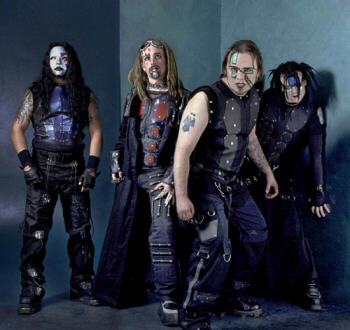 Since you music style changed so much how different is the composing process right now? Do you still start with a guitar riff or keyboards or electronic samples are main tool now?

The whole thing has changed. Of all our previous albums most of the music was made at the rehearsal place but with "SETI" we really wanted to try something different, to create everything on computers. Since we didn't rehearse, we haven't actually had a proper rehearsal in 5 years [laughs] last time we played together was 3 years ago, I didn't even see the drummer in the studio because everything was finished when I went down there. The whole process was basically me sitting here behind the computer and Psy Coma sitting almost at the other end of the country with his computer and trading fillies. We have a server where we upload everything to and than he downloads it, he recreates it or changes it or rearranges it and than he sends it back to me and we do it back and forth until we're satisfied. It completely changes the way you compose the music. When you are at the rehearsal place you kind of know how it's going to sound life and you get a whole different feeling but when you're sitting behind the computer everything changes so drastically. Actually, the vocals on the album were suppose to be extreme metal vocals but once we got into the studio we found that it really didn't work out that well to use it all the time. We really didn't know what to do and the producer was like "Why don't you try singing it?" and I was like "What? Fuck you! I can't sing" but I tried and everything worked out really well.

Exactly, it was a really interesting process because we've never done this before. Everyone else is busy having rehearsal place and... we're broke [laughs], we never got any money from record label so we can't afford the rehearsal place [laughs].

Come on it can't be that bad?

You need to tour more than.

Yeah, we should tour more. That's the plan for this new album. We're going to tour as much as possible, do as many festivals as shows and we're not going to have any manager that takes 20-40% of your money. We've learned our lesson.

Can we count on seeing you in States again sometime this year?

Yeah, there are plans to go there later this year, maybe October, November. I really want to get back there as soon as possible. We really enjoyed playing in States. The whole mentality of the listener is so different from Europe. People here just stand with their arms crossed and watch. In States, I think people are more into it really. They really don't seem to care about this whole "you have to stand around looking evil all the time" sort of things; it's more about energy in the music.

I think that would be all for now, do you have anything to add or say to our readers?

What can I say? Buy our album, get drunk and buy it again [laughs] just don't download it. The only one that's not making anything out of it is the band. I love Internet, it's great for finding new music but if you like it download it but buy the whole album also.