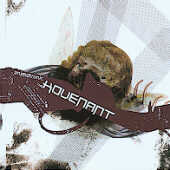 What happened here? Did the name change really effect the bad this much? Well whatever The Kovenant did made all the difference to what was just another black-ish speed metal band. The now re-vamped sound has taken a more industrial metal angle, losing basically all of the elements familiar from previous releases, the new The Kovenant is very interesting indeed.

The first thing that is going to hit old Covenant fans is the speed of the music. Things have been slowed right down with this album, leaving the blast beats and speed sections behind and going for more rock and almost techno sounding beats at times. I think that with "Animatronic" the legendary Hellhammer has shown that he is a very diverse and versitile drummer indeed. With "Animatronic", keyboards, synth modules and samples have become the essense of the music. Every song is filled with various samples, noises and keyboard lines, which are all quite loud and control the entire atmosphere of the CD. The result is a emotionally unstable ride through one seriously messed up psyche. The guitars are ever present and do their job perfectly...but are quite low in the mix, indicating that they are not playing the dominant role in this recording.

Vocally there are two very distinct directions taken. There are the familiar harsh screams of lead singer Lex Icon (ex Dimmu Borgir bass player Nagash) and the soft operatic vocals of an professional older female singer who they brought in to give it an entirely new direction indeed. His vocals are the angry and disturbed side to the music, but as a complete contrast to everything the female vocals put a soft, beautiful and soothing touch on to the finished product which seriously alter the feeling gained by the listener. The production on this album is very good as far as arrangment and product ideas, but it is let down slightly by the mix which could have been clearer.

Favourite song(s): 'Human Abstract' and the brilliant ending track 'The Birth of Tragedy'.

Bottom Line: This is certainly a welcome change to what was a pretty average metal band. While this is a very good Industrial/Metal album in its own right, with a little more work The Kovenant could really stake their claim to the throne.