Into Eternity has been a band that has grown from the beginning, continually progressing and moving on to bigger and better things. Who would imagine that a small band out of Canada, at the time not necessarily taking things as seriously as they should, would make their way to a small label in the Netherlands, DVS Records, and ultimately to well known metal label Century Media? Into Eternity are at the top of their game, and after their sophomore release "Dead or Dreaming," they're ready to release what will be their third album, and first for Century Media. I spoke with vocalist/guitarist Tim Roth about their past, but more importantly their future and where things are headed with Into Eternity, and he had some interesting things to say about everything and anything related to the band. 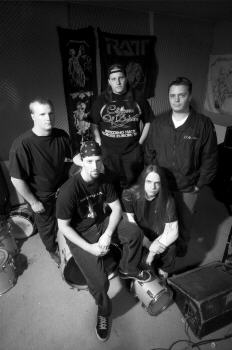 I've first got to make mention of what a wonderfully well-done album your last album "Dead or Dreaming" was. I'd say it was fantastic.

For those that haven't become acquainted with Into Eternity, do you think you could give a brief overview of the history of the band to bring us up to this point?

Yeah, we started around 97. Me and Scott our bass player and our drummer basically went in and did a self-titled release. We just paid for it ourselves just so we could hear the songs. We had a couple of other members and what not. So we did that and shopped it to labels, and we made up like one hundred packages and sent it out to radio just to see who would bite. We didn't think anything would happen, but we got a bunch of contract offers but basically nobody would do it except for DVS out of Holland. So we signed with them and started to build a fan base. We went to Europe and toured there but the whole time we were talking to Steve Joe who is the A&R Rep. at Century Media, but he was working at Noise at the time and he was trying to get us signed and it wasn't happening so we continued to build that fan base up. After we got back from the tour and Steve moved to Century Media, he said that they're ready and they'll sign us now. So for the meantime we're just kind of changing members and what not and for now we've got a good solid line-up.

So now that you guys have made your way up from DVS Records to a much bigger label, Century Media, when will that new album be released?

After the tour we'll be back and we go right to the studio in April. So it will probably be coming out in summer, late summer early fall kind of thing. It's called "Buried In Oblivion."

What can we be expecting from you guys on your third album that will differ from "Dead or Dreaming"?

Well it's going to be a lot heavier, that's for sure. I know every band says that but this time we'll be losing the vocal melodies and have a little more death vocals. We had our line-up changed so we added two new members actually. For "Dead or Dreaming" it was me, Danny, Jim and Scott – us four. But now after Danny left the band we've gotten two new members, so we have Scott's twin brother singing with us and we have another guitar player Jeff Storry, so now we can have three part vocal harmonies live, if we need it. But the good thing about Chris is that he can do death vocals and sing clean, like I can, so we'll both share the duties. It's going to be much, much heavier because Chris likes the growl a lot, and the music in general will be way heavier and faster and lot more shredding solos, that's for sure. Like in the studio for "Dead or Dreaming" we were almost told it seems to hold back a bit by certain people. Especially if you wanted to rip a solo or something they'd say, "Well maybe you should play a bit more melodic here." This next album is going to be all out.

On "Dead or Dreaming" you had some female vocal parts. Can we expect any of that to be on the next album?

Well what I'd like in the future is to get a female keyboardist who can sing clean vocals but there's just nobody really around. I don't think we'll have them on the next album but I really want to have them in the future. She was just a girl that we found in the local pub and we offered her to sing on the album and she just went in there and did it, didn't rehearse or anything. She was just a great vocalist.

I know it's difficult to do this, but how would you describe the sound that Into Eternity puts out? 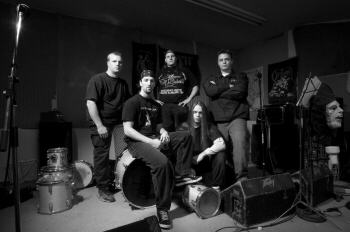 Since many members of the band have brought many musical influences to Into Eternity, I was wondering what kind of influence you think you yourself have brought into the band.

Well I founded the band with everyone so I've always had the vision. It always helps when there's a bunch of people because everyone has different influences, but I write like 70% of the music and all the vocals. I sang on both albums, so that was basically my role. But now I've kind of stepped down from the vocal thing and I'm going to concentrate more on guitar. That's basically what I bring – that and the lyrics.

How has the addition of new members affected the sound?

Now we have two new members. A two for one deal [laughs]. Just because Danny played guitar and sang clean vocals it was perfect because he could back me up on everything and guitar-wise we could trade off. So when we got Jeff into the band we decided that, yeah we have to get another vocalist because otherwise it would just have Scott and I singing and it would only be two part harmonies and we need three. So we got Chris, who was actually going to be in the band when we originally formed in 97 but he went on to be in other bands so it didn't really work out, but we called him right away. The good thing is he does clean and death vocals, so now him and I can double up on the death vocals and clean so it's perfect.

Are there any musical elements that haven't been used in Into Eternity's music that you might want to use in the future?

I don't know. My main thing is I want to get some female vocals in there and keyboards. As far as other styles like jazz and stuff, I'm no jazz player [laughs]. Basically I just know how to play metal. This is how we're going to be but we want to progress and make it quite progressive. On the new album we want to have way more off-time signatures and stay away from the standard ones and whatnot, so that's really where the future is going.

What is the song-writing process like for Into Eternity? Is it kind of a dictatorship or does everybody throw something in?

Well it's a whoever has a good riff kind of thing. Jeff and I will get together at my house and we'll write up some riffs and we'll just have a stupid structure and we bring it to the band and that's where everybody will tear it apart. Scott and Jim are good with arrangements and stuff, so we'll come up with arrangements and everyone will add their two cents and we'll kind of switch it around. And then since we have all the music there we'll add some vocal melodies and then I'll write lyrics so usually the lyrics are always last. The music is what I feed off of. That's how it goes really.

When it comes to the live situation, how do you manage to do both the death vocals and the clean vocals? Is there any trouble switching between the two so often?

Not anymore. We've got it down pretty good. Before Into Eternity I was always singing death metal and then I started out with clean vocals. Since like 93, which is a good ten years I've been doing it, so I've got it down pretty well now. I can pretty much turn it on and off like a light switch. It's not a problem. 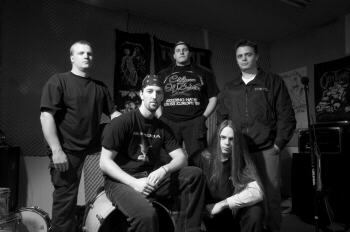 What is the idea behind "Dead or Dreaming"? The album cover, the title, etc.

Basically it’s not a concept or anything but I guess the album is written around pretty melancholy lyrics and in that way it kind of is. Mattias, the guy out of Gothenburg, Sweden, made the cover of "Dead or Dreaming" and he just came up with the artwork and we pretty much didn't have to change anything at all. It was all his vision, not ours. He did it all, and he'll do all of our albums from now on. It's just kind of a thing. "Dead or Dreaming" just seemed like a good title and it's about how do you know if your dead, that kind of vibe.

Since your debut album, throughout "Dead or Dreaming" and into the music you're writing at the moment, how do you think Into Eternity has grown as a band? What has made you guys stronger, what weaknesses have you overcome?

That's a tough one! Well basically we just want to keep getting better and better and better. When we first started, back on the first album we had no idea that it was going to be reviewed at all. We've never had a review at all in any magazines or websites or anything. So we just wrote songs, played them, and all of the sudden we got signed and realized that we need to start taking this thing seriously! So that's why we upped the ante from the first album to "Dead or Dreaming." They're two completely different albums really. I can't even listen to the first one. So we decided that we want to have a lot more vocals, three parts for sure. On the first album we didn't. And have the songs more aggressive and for sure have off-time signatures, and that's what we're trying to do now. We're trying to keep the music fresh, which is always a challenge. You just have to keep taking things up a notch if it's possible.

What is the goal of a band like Into Eternity?

Originally it was to have fun but it all changed in a hurry. We got to release the first album everyone seemed to dig it and we figured we had to do something with it. I always wanted to try everything and make it but it's always tuff to find the right members, and that was the biggest problem because we live in a small town. There aren't a lot of good musicians around and not too many people were serious. Now that we've got the good line-up now we just want to tour and put out albums, and we want to have a band where it's not just the death or the progressive because that's what everyone is brainwashed into doing. You know, you've either got to be Manowar or Cannible Corpse – very distinctive bands. I always thought right from the beginning why can't you have everything in one band? I just never understood it. So we got right on the press and they were saying "Oh they can't find their sound," but that is our sound and we're going to keep progressing that sound. It was to be sort of unique, which is somewhat impossible, but yeah.

That about wraps it up. Thanks for your time and I hope everything goes well with Century Media and the new album! I can't wait for it. Any last comments?

Thanks a lot man.