For a long time, Poland has been delivering us some of the best death metal out there. First it was Vader, than Behemoth, along came Yattering, Lost Soul and Sceptic, but when it came to a decent black metal band, this country always fell short. Recently my friend sent me some MP3s of a very young band from Poland and I didn't know what to expect. I heard a couple of black metal bands from Poland but besides Behemoth who play a mixture of Death and Black they were all on a very low level, and I never even considered them good. Until I've heard Crionics! The last good Black Death metal album I even considered good, was Dimmu Borgir's last offering, and from the songs I heard on Crionics debut, this band is only a step behind this legend. Fury and venomous fire is what came out from my speakers, and I knew that I was listening to the future of Black metal, or at least, what is left of it. All I can say is that this young band rips apart all recent dark offerings that I've heard in a year or so and as quickly as I could I emailed Waran – the mastermind of the band to do an interview. All I can say is that their music fucking blew me away! Tight production, superior drumming and guitar work that could give Old Man's Child a hangover is the least I can say about Crionics. So, if you consider yourself a fan of today's scene take this band into consideration because they are the future of today's Black Metal!! 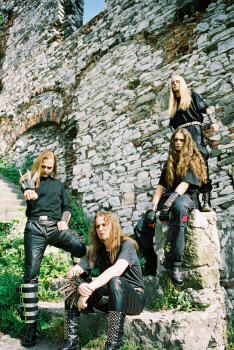 Hail Waran! Tell me a bit about your debut, lyrics, music and all in general. Your album fucking kills! From what I've heard I would call it the new school of Black Death metal.

Hell!!! Our lyrics are a bit satanic as you can notice. Some are more deep than usual. I used some fucked up words but in general lyrics are not the most important part of this band and some of them were written by other people than me. When it comes to music, I think that you are right, at least in some percent. You can hear a bit of an old Norwegian spirit which is definitely a big inspiration for us but we also used a lot of death metal elements. We are not looking for some special originality. We just play music that we love.

From what I've heard you guys like to party hard. You recently went on a tour with Behemoth and it must have been a hell of an experience to party with Nergal and company. What do you think about the bands you toured with? Behemoth, Darkane and another Polish band Frontside.

Oh yeah, we do... [laughs] It was awesome .The whole crew was "rock n' roll". Behemoth and Frontside are great when it comes to partying. So are Darkane whom with we also got a little fucked up once. We knew Nergal before and admire his music. He and the rest of Behemoth are all very cool mutherfuckers.

It already came out in December, the album contains 10 songs, and two covers and it's called "Stench Like Six Demons". Our label, Metal Mind is promoting the album. We are already booked to play Metalmania in a couple of weeks and we are also supporting Cannibal Corpse and Sinister in Warsaw in April.

What do you think about today's black metal scene?

It surely isn't as strong as ten years ago. Some bands just quit or just simply changed their approach to music. There aren't a lot of bands right now that try to keep the spirit of the real black metal. The world is changing, so do people along with music. I don't consider our band strictly black metal, but people have their opinions and it won't be soon as we'll be labeled as posers, [laughs]. I had some kid on one of our concerts that gave me the finger, I just wonder what does a word "poser" mean to a fucking kid who knows shit, like him. 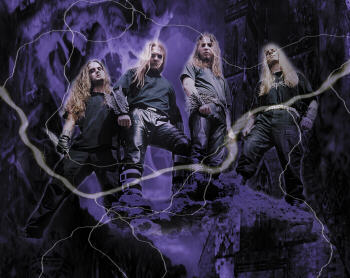 I've heard that you are a hell of a guitarist. I know that you played on tour with Sceptic on the Thrash 'Em All festival. Are you sure Crionics needs a second guitarist? I think that you can easily do the job by yourself alone.

Thanks. Yea, I played and I still do and that's how it will probably stay because it's hard to find a good guitarist for a band like Sceptic, besides, the less people the more room on stage and more money to share, [laughs]. I'm joking of course. Second guitarist is a lot of help on stage. One guitar will never sound like two. We already found a rhythm guitarist for Crionics but for now we have Yanuary from Thy Disease who helps us out on stage.

Your debut album came out in Poland as a bonus album in Thrash 'Em All magazine. Will there be a chance that black metal fans in USA will be able to buy your album? Black metal fans here are waiting.

Yeah, it came out as a bonus CD in "Thrash 'Em All." From what I know it was sold out so there are small chances that anyone can purchase it at this time. The European premiere of "Human Error: Ways To Self Destruction" will be on the 25th of May. I don't know about US but I hope that Empire Records will talk to the right people. You are joking about those fans right? [Laughs]

Tell me what message you tried to send by creating this record. It's a simple question but I think that every real metal head will answer it with truth.

Are you suggesting that I am a fake? [Laughs]. We just wanted to have a record from our hearts, and it is. So we can hold our music in our hands, with a professional cover, professional recording. We wanted to exist in our country's scene - that was our goal, finally accomplished. We always dreamed to go on tour with Behemoth. Well, it happened. I am happy about our promotion and response. I had done a quite few interviews for radio stations and webzines. We are very glad and are working hard to jump this barrier with our next album.

From what I've heard your record has a very (with a very big V) chance to be the debut of the year in Poland, when it comes to a metal album. What do you think about the barrier you have to cross? I hope you guys won't go the way The Kovenant did?

A lot of people are talking, judging our record as the debut of the year. I personally think that we can prove it with our next record which on we are working right now, and all I can say is that it will be a hell of a lot better, man. Don't expect to hear any violins or female vocals or any shit of that sort, unless they will be Satan's bitch slaves, [laughs]. 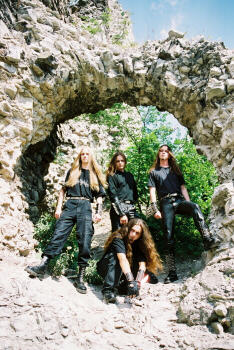 Is Black Metal a form of a religion or just musical expression? I can't imagine you walking to church with your grandma man. Do you take it as seriously as say – Ihsahn from Emperor?

More of the second. I don’t go to church, unless with a canister of gasoline, [laughs]. How seriously does Ihsahn take it, man?

Vader started the scene, Behemoth followed; I strongly think that you can be the next big band from the land of Poland. What are the plans for Crionics today? Are you talking to any foreign labels? Are you happy with Empire Records?

I don't like people calling us that. It can be all but a commercial sentence for the record company. Both bands that you mentioned worked hard and deserve their fame and are doing well and I hope they will. Right now we are with Empire Records and we're not talking with any foreign labels, somehow nobody is interested. We will release our next album under the Empire and we'll see than.

As I said before, you sing in a couple of bands. Your vocals are phenomenal! Do you train your voice in any way?

As for now, I don't have any problems with playing in all three bands. Yea, I do sometimes get a bit tired like when we played the Thrash 'Em All festival tour. I had to learn all the Sceptic songs in a flash and record the guitars for Anal Stench's album in the mean time. I don't have a job for a while so I have a lot of free time now, but it will change. Thanks man, I don't train vocals. Rarely even scream at our practice. Lately I have been thinking about quitting smoking because it does fuck up my voice. Drinking is enough... [laughs]

That's it for now man. Your album is one of the best I've heard in quite a while. I think bands like Dimmu Borgir and Emperor should watch their asses! Last words brother!!!

I'm glad that you like it. You have to see us on stage sometime, that's where it all happens. Emperor is gone so I don't think we should worry about them (what was I thinking?) [laughs]. Drink vodka, especially Polish and bang your head for the Horned One!!!