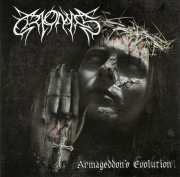 Given current events in the metal underground, 2005 marks the year that Poland will make a triumphant return to metal glory and consequentially a siege on all other forms of metal. Many medium sized record labels have signed a handful of the new Polish death metal acts, and provided them the proper environment to make jaw-dropping music. Two bands, Lost Soul and Crionics, have emerged not only as new powers in the Polish death metal scene, but also as threats to Vader’s long reign in the area. You can find the roots of Lost Soul and Crionics’ in Polish death metal, but they add their own flavor to the occasionally bland death metal bands of Poland. Armageddon’s Evolution, Crionics’ second album, has a sound many black and death metal fans are familiar with yet they add a few new influences to their roots to create a killer combination.

Crionics has developed a sound which is rare and incomparable to any of their Polish contemporaries. Although the band’s roots are in death metal, as evident in songs such as “Armageddon’s Evolution,” Crionics venture far from pure Polish death metal. Clearly, symphonic black metal bands such as Emperor had a huge influence on the band’s creative process and their instrumental parts. Keyboardist Vacv sets the mood of each song and successfully keeps the listener interested in the music by adding different sounds which contrast with the brutality of the music it compliments. Additionally, vocalist Waran has matured since the band’s last record, Human Error. Not only has Waran found his sound, but also the clarity of his lyrics and delivery have drastically improved over time. Another notable difference from Human Error is the production. Whereas Human Error had the production of a black metal record, Armageddon’s Evolution has the production of a Polish death metal album, a sound which will hit home for their Polish fans and give foreigners a taste of what extraordinary Polish death metal can sound like.

Overall, Armadeddon’s Evolution is the ideal sophomore release for Crionics. It is a phenomenal record which sets them a part from their Polish contemporaries and has a sound conducive to fans of both death and black metal. No matter where you live, I promise that if you love brutal Polish death metal and you enjoy the symphonic elements of Emperor, Armageddon’s Evolution will find its place in your CD player, and will not leave for at least a few months.