With their brutal death metal foundation in place, Vehemence have steadily progressed into one of the most unique extreme metal bands to come out of America. Continuing to add more exciting and melodic dimensions to their dark and brutal template, Vehemence are already taking the metal underground by storm. So what's next for the band? I spoke to guitarist/songwriter John Chavez to find out... 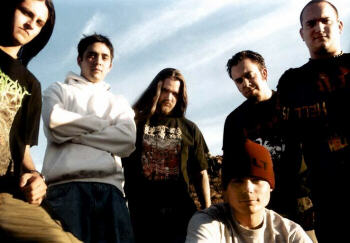 For those who are new to Vehemence could you give us some brief insight into the band's humble beginnings?

Vehemence was created in 1995 with intentions of a sound that was to be atmospheric death metal. The band started with guitarist Scott Wiegand, vocalist Nathan Gearhart, and Bjorn Dannov. Searching led to finding bass player/back up screamer Mark Kozuback and drummer Andy Schroeder. With this line up, material for a demo was released. The demo caught the attention of the Phoenix local scene and an album was decided to be recorded in Nov 1999. Shortly after the recording Scott Wiegand pulled out of the band. I joined in January 2000 taking his place and also helping the band in various promotional ways. After enough money was saved and spent on the 1000 copies of this self-released album entitled "The Thoughts From Which I Hide," underground recognition began to take place. With a self released album at hand, Vehemence decided to pursue Metal Blade Records without trying any other labels. Vehemence then went on a self-promoted west coast tour and we signed to MBR in January 2002 due to the hard efforts of becoming an established working performing artist. "God Was Created" was then released in July '02 and we have been doing tours for it ever since.

"God Was Created" was a pretty large progression from your earlier demos in terms of melody. Was there anything that prompted this progression or did it just come naturally?

Our sound came naturally after having two guitar players constantly sit together and feed off each others ideas. I started out with a brutal death background myself but I ended up being a better melodic guitar player. Our band can appeal to those that are into death/black/or progressive. Influences were a big part of certain style changes, but we are influenced by out of the ordinary bands that are not really heard of. Let us just say the debut record cannot be compared to "God Was Created" because it was a much more basic brutal album with solid lyrics. Our newest album "God Was Created," contains a conceptual horror story that appeals to intellectual readers of metal lyrics. We seem to keep our sound unpredictable with each album released.

You paint pretty grim pictures with your lyrics. What did the ideas for the concept of this album come from? It is a pretty riveting story if you ask me... in the sickest sense of course...

The ideas that Nathan created spawned off the first song of "God Was Created" called 'Made For Her Jesus' and was made after the last songs of "The Thoughts From Which I Hide" days. Nathan is influenced by some of the horror movies that are out today as well as literature from Alistair Crowley and Steven King.

I was surprised to hear some acoustics on the record. It really shows dynamics in a genre that really needs them. Do varying musical tastes aid in adding such elements to your sound?

The acoustics are a big step in our sound and turned out great on the "God Was Created" album. The first album had acoustics on the song called 'Reconditioning The Flock,' but very little was used. Sometimes acoustic tones override electric guitar clean tones in some riffs that you want to capture with a natural feel. What we listen to may be some kind of influence when hearing the studio production used in the album. 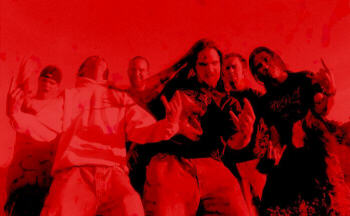 You have been touring behind the record for quite a while now. Any tour highlights so far?

Highlights of these past "God Was Created" tours, are the bands we have played with and the friends we have made dealing with them. The Summer of Blasphemy tour last July '02 was our first run throughout the United States. Many shows were played that brought forth new listeners of our band and we remain having a rapid growing fan base. Playing Metal Fests have been excellent because when we are at home and miss a show due to work, we get to see the band eventually no matter what. Touring with Testament was something we enjoyed because they were one of the founding influences for all that is Melodic and Metal. Dealing with Impaled/Decapitated was a blast as well seeing fire blown and seeing technicality proved daily.

I heard you toured with Nuclear Assault who were pretty big in their own right back in the golden years of metal. Were any of you guys big fans before hand?

Actually we were not really big fans of Nuclear Assault until we got to know them and party with them. I knew what I knew from past albums I have heard but they seem to get tighter and tighter with each performance. We got along with John, Dan, and Erik the new guitarist very well and helped each other out when it was needed. We come from the old school death metal background from when Gorefest, Carcass, and Entombed were still around.

Do you get a lot of people with surprised looks on their faces when you are a brutal death metal band and come out with a keyboard player?

Some people jump to their conclusions right away, and some get exactly what we are trying to use the key element for and that is simply for more depth and atmosphere. Jason Keesecker usually writes his composition and then Bjorn and I compose around it. We try and keep the keyboard parts as basic and heavy as possible.

I heard you guys recently got added to the New Jersey Metal Fest. Excited about the possibility of opening the door to new fans?

When we played Milwaukee Metal Fest last year in 2002, it was the first time that we knew that we were performing to an entire new audience. It was actually proof that we attracted a curious fair sized audience and it was a rush. I felt we played a decent show even though the sound on stage was poor, we still played our solid short set the way we always do. It actually went well and people were into Vehemence and I could see the majority of the crowd head banging as well. Hopefully we can influence some mosh pit action since that always happens when we play on tour for other audiences that are already familiar with our songs. The Vehemence hype is defiantly out there I can tell you that. 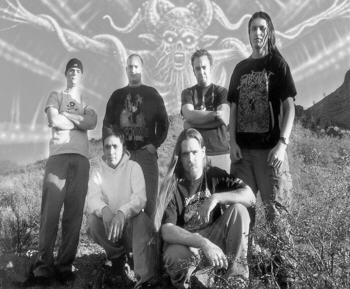 Any other plans besides touring that you have regarding promotion for "God was Created"?

We are thinking about creating a music video since it is about time we should. A music video with our lyrics will turn out magnificent because our lyrics are very depictive. Maybe we will do a fan vote on what song we should turn into a music video. But I can't say much other than we will want to tour for this album as much as possible and venture on to Europe and other countries.

I also heard you all are working on pre-production for your new album. Any news you can share with us regarding that concerning maybe the sound and the lyrical concept this time around?

We have 4 songs recorded free thanks to Will Solaris at the Conservatory Arts in Tempe, AZ. The new material we have sounds like a more advanced Vehemence with greater skill and with a more realistic lyrical approach. Like I said before we remain unpredictable with our sound and we always try to be. The song titles for this pre-production demo are 'Kill For God,' 'You Don't Have To Be Afraid Anymore,' 'Darkness is Comfort,' and 'We Are All Dying.' It will not be released outright to the public, but we will think of how we will let our fans listen to it in the near future.

Well thank you for the interview John... any other words you would like to say to anyone who may be reading this?

Thank you Adam for this excellent interview, you asked some very important questions! Anyone that is interested in finding out more about Vehemence please visit our website at http://vehemence.brutaldeath.net Feel free and download our "God Was Created" mp3, or any previous mp3s from previous projects. If you need a question answered or just want to email us for feedback you can do so at vehemence@brutaldeath.net.