"No fillers, just killers!" (Christiaan, guitars and founder of Katafalk) Such a simple statement, but holding so much weight, and embodying all the Katafalk principles. "Storm of the Horde" is their debut album, and is an exciting journey into the world of horror and reality being woven through the simple tapestry of death/thrash metal. Christiaan gave up some of his time to answer a few questions that I thought you guys may find interesting. 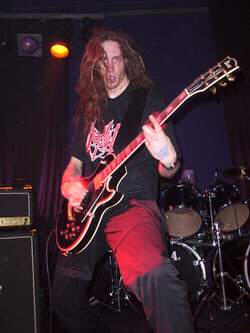 Greetings from Metalbite. Tell me about Katafalk. How did it all happen in 1995?

Greetings! How was Katafalk started? Well, I met up with some other metalheads and things got going. I wrote some songs and came up with the name Katafalk (which means hearse in Dutch).

Now Christiaan, you were the founder of Katafalk. What did you have envisioned for Katafalk when you started? Did you believe Katafalk circa 2003 would be what had you hoped back in 1995?

I have always meant Katafalk to be a real metal band and so we still are today. No trendy influences. The band has been through lots of line-up changes but always continued and never strayed from its path. Getting signed, recording "Storm of the Horde" (released worldwide by CBI) and getting all those great reactions is really rewarding after years of hard work.

How many lineup changes did Katafalk have to go through to get to yourself (guitars), Michiel (drums), Pier Abe (guitars), Henk Jan (bass) and Wokkel (vocals)?

All of Katafalk's releases had different line-ups except for me (guitars) and Wokkel (vocals). In Katafalk's history there have been about three major line-up changes before getting to the final one. Michiel is our 4th drummer for instance and at least the same goes for the bass and second guitar position.

The inevitable question comes; you started in 1995, but couldn't manage to get an album out until 2003? Why is that? You lads are pretty creative and "Storm of the Horde" is obviously testament to your creativity so I couldn't imagine it would have been a lack of creativity...

The reason is mainly the changes in line-up mentioned above, not a lack of creativity. We also wanted to be a signed band first before recording a whole album. Despite all line-up changes, CBI believed in Katafalk's music and signed us.

With that said has it been a tough 8 years trying to get an album out and a record deal?

The first demo ("Through The Storm", 1997) wasn't really promoted and nothing new was recorded until a promo in 2001 (appropriately titled "Promo 2001"). After that things went smoothly: We toured with God Dethroned and got our first offer from CBI. Still some people wanted to do something completely different and quit. After getting replacements, we signed the deal and recorded "Storm of the Horde" in late 2002.

"Storm of the Horde" deals with some interesting themes, for some songs you guys seem to be focusing on completely isolated topic such as 'Succubus' drawing on no correlation to contemporary topics. But in other songs 'Aesthetic Vampires' being an example it seems you are still using a horror theme but making parallels between the horror theme and topics in the modern world. Such as individuality, freedom and standing up for what you believe in. Am I on the right track?

You're on the right track! For the record, we have used both fantasy and reality lyrics. Fantasy lyrics have the traditional metal subjects and we like them for being very metal. 'Aesthetic Vampires' might look like a horror title but actually deals with the psychic vampires of real life. There are quite some thoughtful lyrics on the album, although we don't want to come across too preachy as a band. 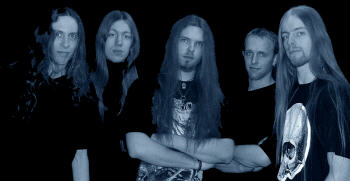 The most striking feature of "Storm of the Horde" and in almost every track is that you guys have seemed to have made it mandatory for a song to be catchy as hell. If it ain't catchy throw it away, ya know what I am saying?

Yeah, indeed, no stupid boring parts! In my opinion Metal is supposed to be exciting and energetic. No fillers, just killers!

What is your inspiration? Firstly as a guitarist and then for the entire band Katafalk, as a unit...

I grew up with traditional heavy metal and then came speed metal, thrash metal, death metal and black metal. I like them all a lot and take the best bits of everything. Some bands I take inspiration from are Iron Maiden, Slayer, Morbid Angel, Dissection, Emperor and Arch Enemy. Every member of Katafalk likes extreme metal, that's why we play it.

As a Dutch band, why don't you write in Dutch? Is it a marketability issue as to why you write in English instead of Dutch? As I am sure you would be more competent in Dutch than English (which is not to say your lyrics are below par)...

We don't write in Dutch as it's more common to write in English. Almost everything in music is in English and it's also the main language on the internet. Every normally educated person can understand it and you really can't say that of Dutch.

How does the song-writing process work for Katafalk? Is it lyrics first and then music compositions? Or depending on each track? Is there a set formula you guys follow for a song?

It's always music first, then lyrics. There isn't a standard formula though every song should have a good structure, killer riffs, strong choruses and decent lines. No cheap stuff!

I like traditional heavy metal as well and those influences such in 'Empty Life' and 'Blind Envy' were very much praised in the reactions we got on the album. For "Storm of the Horde" we picked all fast and brutal songs to make our debut album really over the top, for the next album we'll maybe do something else. For instance we might incorporate more technical, melodic or epic parts, but Katafalk's style will not drastically change. 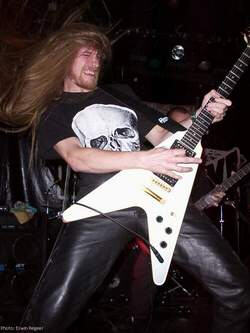 Do you guys get to play alongside I.N.R.I. much? I listened to "Hyper Bastard Breed" last year (also on Cold Blood Industries) and it was a great experience. Seems there are some decent bands coming out of Holland at the moment.

Yeah I.N.R.I. is a great band too and they're also cool guys to hang out with. We're on a package with them and regularly play together. New Dutch signings on CBI are Crustacean and Monolith, check them out too!

The live Katafalk experience, is it an awesome event that pulls and sucks the crowds in? Do you guys player better if you can feed off a mosh pit that is chock full of energy and excitement?

You can surely say so! Katafalk's music is really great for both playing and experiencing live! We always go crazy on stage, which involves a lot of head-banging! To see the crowd go wild too really pushes us to the max!

'Humanity I'm not one of you, Sell my soul like Faust...' from 'Aesthetic Vampires', is this reference to the infamous Bard 'Faust'? This is clearly a track about people who flock to the crowds and who will not stand up for themselves. There are actually some pretty positive lyrics throughout "Storm of the Horde" making quite a different listen from the norm in this field.

As far as I know that particular line is referring to the Faust-legend (the man who sold his soul to the devil in return for earthly powers and riches). The subject of people who flock to crowds returns in even more of Wokkel's lyric. He's urging people to think for themselves and don't bother others with their crap, which can be seen as a positive message indeed (although he's also telling those and other sorry people to simply fuck off, [laughs]). Live your own life and be free!

Well Christiaan, thanks for your time. And more thanks for such great album in "Storm of the Horde"!

Thanks for the interview and support! A message to all readers: Check our website www.katafalk.com for news, tourdates, downloads, merchandise and other stuff. Go buy and listen to our album "Storm of the Horde", have a few beers and bang your heads! See you on tour! Cheers!