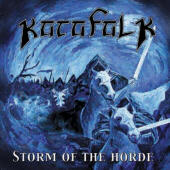 Kick ass thrash and death metal in a lethal concoction. Catchy, but with a satisfying aftertaste. Holland is bringing out some decent hybrid death metal bands, and Cold Blood Industries seems to be responsible for this. Hot on the hells of I.N.R.I. comes Katafalk who like I.N.R.I. bring us a decent old slab of death metal with a few thrash trimmings. Katafalk, however, unlike the aforementioned I.N.R.I. have another card up their sleeve which comes in the form of a few black metal influences.

Vocally Katafalk rip along like you would expect a death/thrash band to. Wokkel keeps up in perfect timing with the Katafalk horde. Grim screeches, and foreboding atmosphere aside, this man is a competent vocalist and suits the music perfectly.

The actual tangible music of Katafalk is probably most memorable for their extremely strong choruses. Each song is drenched in a catchy riff and some equally catchy vocals, which force you to real stand up and –want- to listen to the rest of the track, if not album. Seemingly for "Storm of the Horde", Katafalk have made it a real target to hone in on their natural songwriting abilities and strike it home time and time again. Each track is well written and contains enough flavour to make it a potential hit.

My only real complaint here is the production, which is possibly a bit thin. But overall this is one of the finer debuts of the year, thus far.

Bottom Line: There isn't too much wrong with "Storm of the Horde", for a debut album this is pretty fucking exciting. Can't wait for the follow up.