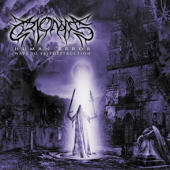 Polish metal improves with every passing year. What began with a few extremist nut jobs running around in clown make-up has evolved into a legion of underground heavyweights. The latest to emerge from their swelling ranks is Crionics, with their full-length debut Human Error, showcasing a promising mixture of black and death metal influences. There's a great deal of talent evident in this release, but... no, wait, there's no "but." Crionics are a talented band, and this is an impressive full-length debut. That's all.

Crionics combine the styles of an even mixture of death and black metal influences, and the result lies exactly midway between the two genres. One hears Cradle of Filth's Dusk and Her Embrace on "Sacrosanct Strength", Bal Sagoth's Starfire Burning... on "Precipice Gaped", and Emperor's keyboards throughout "Episode of the Falling Star". One also hears influences from old American death metal, particularly Morbid Angel. Fortunately, while parts of these songs sound liberally sampled from established bands, the tracks themselves are unique enough to distinguish. In this way, Crionics avoids the cliché of sounding like a cover band on their debut.

It's clear that Crionics have an impressive amount of musical talent, as the wide range of influences makes this album diverse and varied. Nowhere do songs become boring or repetitive. There are no hook lines, no simplified or generic riffs. The song structures are mature, interesting, and complex. Overall, the album is impressive and extremely well-composed, with remarkably few flaws and no big mistakes.

This is not to say that there aren't one or two slight weaknesses. There always are. In this case, for example, the obvious Bal-Sagoth/Emperor influence creates problems, because both are inimitable. Resultantly, the keyboards, in particular, are extremely hit-or-miss: For example, "Episode of the Falling Star" sounds almost like an Emperor cover, but "Hallowed Whores" has keyboards stolen directly from The Wizard of Oz. I envision the wicked witch of the west, riding a broomstick, screeching about death and Satan to pounding double bass drums. That theme reappears on their final track, as well, a cover of Carpathian Forest's self-titled anthem – which, again, sounds like The Wizard of Oz whenever someone plays a synthesizer.

That's really the only criticism one can make, though, aside from their influences being a little too obvious. Certainly, that will disappear with time; Crionics sound like they're still in the process of establishing their own style, which is acceptable this early on in any band's career. The music is so well-crafted that such minor concerns can be overlooked. It's memorable, interesting, and, despite itself, mostly original. Highly recommended; one of the better full-length debut albums that I've heard.