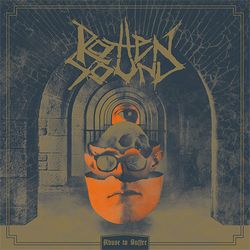 Twenty-three years of creative activity requires something extra out of you, therefore, the Finns knew perfectly well that they cannot mess this one up. Did they pull it off - I will explain in a moment. We had to wait five whole years for the successor of Cursed. Rotten Sound, just like the most of the stubborn grind-folk, firmly stick to their likings. Novelties, trends and fashion do not exist in their musical minds. Anyone familiar with earlier releases of Rotten Sound already knows - and all inexperienced ones I like to enlighten - Abuse To Suffer is a mix of the old Swedish death metal (Nihilist) with an old English grind (Napalm Death). Musically they’re closest to General Surgery, lyrically/ideologically to Nasum and early Napalm Death.

The seventh album of Finland quartet brings 16 tracks lasting a little over 28 minutes. Is it too little, or a lot you’ll have to answer yourselves, as for me, this is an ideal length for a grind madness. Although those guys tune their guitars way low, the album was carried out relatively clear and transparent and even though the old-Swedish bands have been popping up like mushrooms after the rain lately, it is precisely such genuine ones that deserve all the attention. Abuse To Suffer is certainly not a copy of the Left Hand Path even though it sounds very similar. However, Entombed is a death metal band, and Rotten Sound is full bloodied grinder bunch although adorned with some death metal influences. Such nice ass kicking it makes me shiver. This long awaited album doesn’t bring anything new to the fold basically. Originality is also not in the abundance, but as for energy and heart - those four Finns are well worthy of having their footsteps followed (but not plagiarized!). This is a worthy successor to all previous accomplishments and it’s flogging our ears with D-bit guitars and raspy screams of G-Keijo Niinimaa. Abuse To Suffer is both a mad clatter, like in the ‘Lazy Asses’, ‘Slave To The Rats’, ‘The Clerk’, or ‘Retaliation’, but also more tasteful like in ‘Time For The Fix’ or ‘Inhumane Treatment’. There is also - like taken from the manuscripts of the Nihilist/Entombed – ‘Fear Of Shadows’ or the slowest on disc ‘Yellow Pain’. It is a varied album - and thanks to that - the effect of any boredom should not occur. I do not know whether this was a longing for a decent ear thumping or maybe something else but this album really appeals to me.

Not so long ago I was taking pleasure in listening to the sounds of October Tide, and suddenly comes such a swift kick in the face. What links these two radically different bands you ask? To me is the sincerity and simplicity of expression. Music that’s alive, spelled with the big "M" and without technical frills. All of you waiting for another act of General Surgery and those who indulge in creativity ranging from Incarnated to Nasum I’d like to welcome to the new mandatory listen courtesy of Rotten Sound. For statistical purposes, I'll add only that digipak version was enlarged by two bonus tracks ('Equal Rights' and 'Someone Weak') and Season Of Mist posted 16 song stream via YouTube.