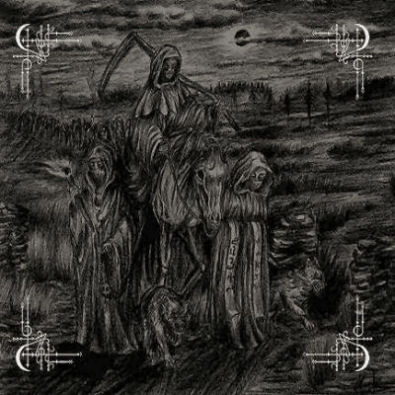 A frostbitten guitar line kicks off the first track of Behexen and captures my interest in a matter of seconds. Forgive me for using the slightly nonsensical term "frostbitten" in this context. Yet it is true. It seems as if Behexen did not record their tracks in a studio, but in a fridge. The ice-cold leads generate a feeling of discomfort which cannot be suppressed. The 'Mouth of Leviathan' is opened widely and its abysmal throat seems to be unfathomable.

But Behexen does not only focus on coldness. Their music conveys a mouldy smell as well. Apart from this, it is part of the fascination of 'Mouth of Leviathan' that occasionally flaring guitar lines show up, because they stand in sharp contrast with the negative, moribund aura of the track. No doubt, this track marks a generic black metal piece of the finest art. But Behexen's second track does not pale beside the first number. More aggressive and equipped with goose drums, 'Where the Devil Spoke' spreads the satanic message. The agonized lead vocals complete the picture successfully. 90% for the homogeneous contribution of Behexen, not least because of the more or less perfect production which enables us to listen to black metal in its purest form.

Homogeneity is not the suitable word to describe the overall impression of Satanic Warmaster's pieces which are pretty well produced during different recording sessions. The first track provides fast, straight and devastating black metal the way it should be. Too bad that the second number fails to make a similar impact. I am listening to a crude kind of campfire black metal. A thin acoustic guitar meets rattling drums. In this context, the nagging vocals are rather goofy. One may call this track an experiment, but one may call it a disappointment as well. I prefer the metallic version of the song which was released on Strength & Honour, the debut from 2001. Anyway, due to the first strong track, I think that 72% for Satanic Warmaster are justified. That's okay but not enough in order to win this Finnish competition. Behexen emerge victorious, not least due to the fact that their music evokes more emotions.

The formidable artwork expresses the atmosphere of this underground release very well. Although the aforementioned experiment appears slightly strange, the music transmits the violent, ominous and unholy spirit of black metal in a very intact way. Purists will love the first three tracks of this 10" and I do it as well. Do not hesitate, if you have the possibility to buy one of the 1000 copies of this vinyl. I am sure you will not regret it.