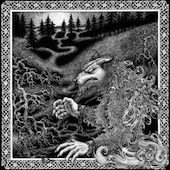 Nachzehrer is Finnish black metal. Is that enough of a description? No? Then there is the additional hint that Satanic Warmaster sounds different from Quiet Riot or Mötley Crüe. More like Def Leppard on "Songs from the Sparkle Lounge". Nah, just kidding. To be honest, the album from 2010 is not one of the great moments of Finnish sound art. Among other things, that's because of the production. The guitars sound clunky to sticky, the drums have exactly zero power. The vicious creaking of the voice also only comes to the fore to a limited extent and suffers from the dominance of the dull, monotonous guitars.

Of course, true black metal has an inner strength that cannot be completely destroyed even by a bad recording result. In this respect it is nice that Satanic Warmaster comes very close to the core of the genre on Nachzehrer. The album consistently exudes negative energy. Well, the music-free intro is worthless filth, but the regular tracks basically give no reason to complain. Some almost melodic parts, such as at the end of 'One Shining Star', set the tone, while 'Rotting Raven's Blood' could have done with more momentum, especially at the beginning. But basically the guitars always find the right tone to maintain a certain tension. Only in the last piece they don't play a role. 'Nachzehrer' ends with the ramblings of a storyteller, gently accompanied by ambient keyboard tones.

The bottom line, however, is that despite quite good tracks like 'Satan's Werewolf', much of Nachzehrer sounds decent, but not outstanding. 'Satan's Werewolf' offers a good mixture of rumbling primate black metal, a chorus that is striking in a positive sense and a relatively finely spun melody with violin character. Mostly, however, the lone fighter behind Satanic Warmaster feasts on less than filigree guitars, whose bluntness almost rivals the coarseness of Bathory’s second full-length.

Sometimes you also wish the songs would get to the point faster and only know the five or six minute mark by hearsay. Thus, Nachzehrer has a few lengths that are not conducive to the enjoyment of the album. Be that as it may: the record from 2010 offered nothing new and not the slightest deviation from the standards of black metal art. Instead, it explicitly emphasises the aesthetics of the genre and leaves a predominantly positive impression with tracks like 'Warmaster Returns', which, however, as described above, is not supported by a punchy production. This results in an acceptable disc, which is by no means a must for friends of Finnish black metal. Especially since there are supposed to be a few other bands of this genre in the land of a thousand lakes. At least that's what I read somewhere, I think.