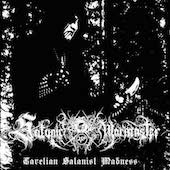 A guttural scream accompanied by whirring guitars opens Carelian Satanist Madness, the third long-playing record by Satanic Warmaster from 2005. Already the first seconds give me the good feeling that nothing can go wrong here and the first lines of the lyric (please see above) reinforce this sentiment. The almost meditative, yet gruff sound of the guitars, the viciousness of the rough voice and the stoic drums let the true spirit of black metal rise from the gloomy sound picture in no time. This spirit, by the way, is not a party-political one and therefore it is good to see that certain inanities of earlier works do not play a role in Carelian Satanist Madness. Unlike in "Der schwarze Orden", there are no "aryan winds" blowing here. Despite this, or perhaps exactly because of it, the album from 2005 is convincing. Because the clear commitment to the deep black genre does not lead to monotony. 'The Vampiric Tyrant' at position one of the song list delights with a chamber music-like melody that contrasts with the aggressive, fast thunder of the other parts of the piece, while 'True Blackness' is not stingy with the charms of an archaic opening riff. In between is the excessive and nearly epic title track - and so each song has its own characteristics.

Satanic Warmaster revel in dark melancholy from time to time, but also like to attack with full force. The single artist behind the band name, supported only by two session musicians, obviously appreciates the whole range of unadulterated black metal. And not only that: since the good man comes from Finland, no one should be surprised that he integrates the basic mood of the genre into his compositions in a very conclusive way. Still, I wish he would press the gas pedal a little more often, especially since the production doesn't degenerate into a blurry something even in the high-velocity rhythms. Not least because of this, the fast-paced 'Eaten by Rats' is more impressive than the quiet, almost sluggish 'My Dreams of 8', which has to live with the label "acceptable".

Basically, however, there is no failure on the album. Even the closing, almost sacral keyboards-only piece, whose thoughtful melodies offer a contrast to the throaty sermon of the lonely artist, has its raison d'être, because it definitely creates a black metal atmosphere. Therefore, all those who are already financially overwhelmed with today's flood of Finnish black metal should keep their hands off this release. The danger is great that their shopping list will become even longer afterwards.