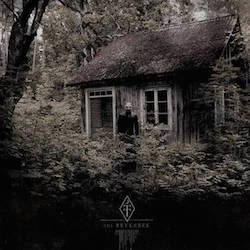 Type: Full-Length
Release Date: June 17th, 2016
Label: Debemur Morti Productions
Genre: Avant-Garde
1 Makoria
2 Ghost At The End Of The Rope
3 The End Is Mine To Ride
4 Marmorisation
5 Where Shadows Have Teeth
6 Exuvia
7 Fire Dances
MetalBite on YouTube
MetalBite on YouTube

It's dark and foggy, there's a feeling that you are somewhere you know, but everything is unfamiliar. There's a presence that you feel in the shadows, you can't see it but you know it's there. You're alone, lost and cold and something ominous is preying on you. You realize you're asleep and this is a nightmare.

Terra Tenebrosa has bringing nightmares to life since the release of their debut LP The Tunnels in 2011. Formed from the ashes of the post hardcore band Breach, founding member and braintrust, The Cuckoo, wanted to explore the darker regions of music. At this he has succeeded. From the first notes of the first album I knew I was listening to something original. I also realized I was listening to truly terrifying music. I must make it a point that there are very few bands or albums that I consider to be truly scary. Skinny Puppy achieved this with their pinnacle album Too Dark Park, Bethlehem did this with their first 3 albums, S.U.I.Z.I.D. in particular and Portal has also conjured this feeling over their career. However, they all pale in comparison to what Terra Tenebrosa has been able to do over 2 full-length's and an EP.

Their 3rd full-length The Reverses sees the band release their first album for new label Debemur Morti Productions. A partnership that seems to be equally great for both parties. Debemur Morti re-issued the bands first 2 LPs with a slight update to the cover art, as a precursor to this release. Giving this band the attention they deserve with good promotion of the new album.

The first thing I noticed is how big the production is. This does wonders for the Terra Tenebrosa sound, giving clarity to each individual layer of the chaos. After the first track "Makoria", which serves as an intro, "Ghost at the End of the Rope" storms out of the gate as the sound level increases by 50% from the opening track. The second thing I noticed that's different with The Reverses over previous efforts, is that the songs are more structured like a traditional song. This is evident in the albums first stand out track "The End is Mine to Ride". It's thunderous rhythm section provides the trademark noisy side of the band while giving way just enough for the dissonant guitars to stand out clearly among hazy, foggy background. this is a constant theme throughout The Reverses.

The second stand out track and my personal favorite is "Where Shadows Have Teeth". Featuring guest appearances from Alex Stjernfeldt (The Moth Gatherer) on bass and MkM (Antaeus, Aosoth) lending his voice to the final verse and refrain. It's suffocating nature brings about panic in the listener and if you're looking for relief, it's not coming. This song with crush you under the pure weight of it's heaviness. When it does relent, it leaves you in a far more terrifying place than where you were and transitions into the albums creepiest track "Exuvia". This is pure horrowshow. An eerie melody with demonic whispers. this could be the soundtrack for a horror film.

Album closer, the epic, almost 17 minute "Fire Dances" featuring a guest vocal appearance from Vindsval (Blut aus Nord). Which is probably the closest band I could use as a comparison. However I don't think would be fair to either band. This is also the most black metal song on the album. It's starts out blazing then transitions into this fine piece of ambience, very reminiscent of the above mentioned band and closes with a doom riff for the ages.

Terra Tenebrosa have created a dark nightmarish beauty. Everything is more focused, the ideas are more complete, the songwriting is better and the songs are tighter. All this is done without sacrificing an ounce of atmosphere. The songs are just as terrifying and weird as ever. However they are easier to digest. The Reverses is giant step forward for the band, now let's hope they get the recognition they so rightly deserve.