Every so often we come across a band that defies all classification. A band that transcends genres. A band so experimental they sneak into your subconscious ans set up camp. Sometimes that band is shrouded in mystery, and find their home among the shadows of obscurity. That band is Sweden's Terra Tenebrosa. Recently I had the pleasure of discussing the bands image and sound, as founding member and frontman The Cuckoo invited me into his dark world. 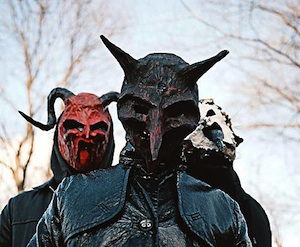 Hello, first off I would like to thank you for this taking the time to do this interview. From what I've read about the band, you are all former members of the band Breach. What prompted the disbanding of Breach and the subsequent formation of Terra Tenebrosa? Aside from the band members are these two projects related in any way?

We are only two members from Breach in Terra Tenebrosa but the projects are not related in any other way than that and that a couple of tracks on the first album were initially written for Breach. Breach was not a healthy band for the last couple of years of its existence. We had grown tired of each other and we didn't tour much. Also a couple of us had issues with alcohol and other substances and that sort of put the nail in the coffin. After Breach broke up I was kind of tired of the whole music scene and decided I would stop playing music but It´s like an itch, I had to pick up a guitar and play once in a while. I had a few ideas from the Breach days that I expanded on and soon enough I started fooling around with ideas in a studio. Each idea gave birth to the next and when I had a couple of tracks I played them for a friend who suggested we should start a band. Another guy from Breach came in to the mix and we had a band.

You wear, what I am assuming are homemade, handcrafted masks, Was this your intention from the beginning or did this idea come about later. What was the catalyst for presenting the band this way?

The first masks I made in papiér maiche because we wanted to have imagery that corresponded to the music. And initially we had no plans on playing live so we just wanted beautiful, dark photos to go along with the music. Just standing in front of the camera in our every day clothes didn't appeal to me and the masks felt like a good idea since the music was kind of surreal. When deciding to play live we had to have masks we actually could move around in so a friend the works in movies and theatre made masks in latex for us.

The band is draped in mystery, from the masks, to the names, to the members instruments not being listed. I don't want to disturb the obscurity of the band, but aside from you doing the vocals do you play any other instruments? What instruments do the other members of the band play?

We switch instruments back and forth. If someone comes up with an idea, instead of trying to communicate it to us he just goes ahead and records it. Some tracks I have recorded entirely by myself.

When it comes time to write songs, is this a collective band effort or is there one majority songwriter? Also, as I listen to 'The Tunnels' and 'The Purging' these seem to be concept albums, both albums have a soundtrack vibe to them. I never listen to a solitary track and have to sit down and experience the albums as a whole. Was this the intention? Are these concept albums?

I do the most of the core writing but if someone else comes up with an idea I like we use it, although everything that happens in this band is filtered through me.
The Purging is more of a concept album than The Tunnels. Lyrically anyway. The lyrics on The Purging plays out a coherent story of sorts while on The Tunnels we wanted to have the music be kind of a soundtrack to what went on inside the listeners head while listening. I´m glad you say that you listen to the whole album instead of just solitary tracks. That is the intention with both albums, that each track blends into the next on some level.

I guess everything we've ever listened to. The atmosphere I wanted to create went well with downtuned and distorted guitars. Other than that I didn't have metal in mind when starting to record stuff for Terra Tenebrosa. There´s a lot of ambient in there as well. Also I wanted the dramatic feeling you can get in classical music. As for the vocals I wanted them to sound inhuman or possessed, sort of like having "The Evil Dead" singing, I draw a lot of inspiration from horror movies. At the same time everything that comes out of me is the soundtrack to all the dark and ugly emotions that sometimes overwhelms me.

I know that music categories can be very confining to a band, and Terra Tenebrosa writes music that is so far outside of the box, that I haven't a clue what to file the band under. What genre would you put the band in? Who would be your musical influences?

As for the genre I have no idea. We didn't set out to play a certain style and we didn't consciously look to any other band for inspiration. I listen to everything from jazz to black metal. I've always been drawn to the dark whether in movies, comic books and music. Like I said before I draw inspiration from horror movies but also poetry and prose. Sometimes a line in a book might invoke a certain feeling I try to translate into music. And as for the comics, the name The Cuckoo I nicked from The Sandman Chronicles. The Cuckoo being an entity roaming peoples dreams. Kind of how I view my Cuckoo, something out of the subconscious or an archetype living in peoples minds.

You stated earlier that you never intended on playing live. What changed your mind? How are the live performances working out? How do you create the same atmosphere live that you have on the albums? Also, any plans to tour the United States?

I didn't think it was possible to do it live because of all the stuff going in the songs and I didn't want to use backing tracks. Then you could just as well do it playback. But the other guys wanted to do it and our friends in Kongh wanted us to do a gig with them so we thought we could give it a try. Once we did that we tasted blood and now here we are. Live and on record are two slightly different things. All the overlapping vocals on the albums I could never do live but we distilled them down to the essentials. Same thing with the samples, I control the essential ones on stage. Also live we focus more on the stuff with a faster pace leaving out the long, monotonous stuff. But I'm quite happy with what we're doing on stage. It would be nice to come to the United States but there are no plans for now. We will be doing a shorter European tour early next year together with The Old Wind that also has former Breach members in the line up. 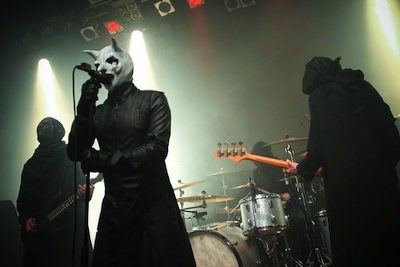 This question is purely for me, but I still feel that the fans would like to know as well. I am a huge horror film fan. I enjoy many different styles, but my favorites are witch hunter, pact with the devil and/or demonic possession films from the 1970's. What are some of your favorite horror films? Has any film directly inspired a certain song or songs?

I think the ones from the 70´s and early 80´s have an overall more creepy atmosphere than the modern stuff. It´s hard to point out particular films but as a kid I loved Fulci's "The House by the Cemetery". It has a sick atmosphere I´m particularly fond of. I love "The Evil Dead", huge inspiration for the vocals in Terra Tenebrosa, and it also have a really sick atmosphere. There are so many films that I like. My favorite of all times even though I don't consider it a horror film is "The Texas Chainsaw Massacre".

"The Texas Chainsaw Massacre" is my favorite as well. The Imagery of that film is very unsettling, like the imagery of Terra Tenebrosa. Back to 'The Purging' being a concept album. You had said that lyrically there is a theme, a story of sorts. What is the story?

I don't think we as humans live up to our true potential, that we are godlike creatures but we go sleepwalking through life. The lyrics on The Purging are about the exploration of the dark, obscured parts of the psyche or the soul in order to find hidden treasures that can aid us in becoming gods and also to sublimate whatever negative emotions and impulses one might find. It all starts with "The Reedeming Teratoma", nothing organic about it and nothing destructive as cancer but as the sleeping part of ourselves we can awaken in order to fulfill ourselves and continues with the different stages of becoming. The only lyrics that are not part of the story is "Terra Tenebrosa". I read "Letters to the Earth" by Mark Twain where the devil goes down to earth to investigate the human nature and reports back to god in a series of letters. I wrote a letter from Lucifer to us humans instead.

I know that 'The Purging' is not even a year old yet, but when can we expect to hear new material? Have you began writing new songs? Will you continue with this concept oriented approach?

We have begun writing new stuff. Right now I feel as though we've already done that concept stuff with two albums now and like to try a different approach. I still want the album to be coherent though, not just a collection of tracks. Judging from what we have so far the music is a bit faster and violent but tomorrow I might want to go in another direction. We will release a two track EP early next year with leftovers from both The Purging and The Tunnels. Then we will have a clean slate since we have a new studio now and a 18 minute track on the EP is the last thing we recorded in the old studio before we burnt it to the ground. I´m really excited to start recording the new stuff. My head is flooding with ideas.

I want to thank you for taking the time to share with me what makes Terra Tenebrosa tick. It was truly a pleasure.

Thank You. It was my pleasure.