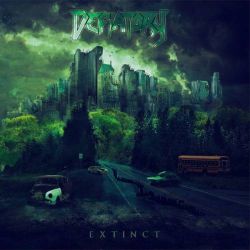 Sweden: fantastic nature, Dalahäst and legions of great metal musicians. The guys of Defiatory catapulted themselves on my thrash metal radar in 2016, but due to a miserable distribution, I was not able to get a physical copy of the debut. Developing country Germany! But now, a few days ago, I fished my ordered disc from my mailbox. To say it in advance: Sweden is still a formidable provider of extreme and intelligently designed metal.

The five-piece does not consist of greenhorns and the compact, coherent and dynamic compositions express this fact very well. They avoid awkward breaks, senseless fade-outs or vapid choruses in an almost playful manner. Defiatory succeed in managing the balancing act between tradition and modernity. They do not sound progressive, but the dry, pure and well-defined production ensures the contemporary aroma of Extinct. Its vibes are comparable to that of Mortal Strike or The Haunted before they got stupid. Thrash metal with some trace elements of punk is the name of the game and Defiatory offer the entire spectrum. High velocity outbursts meet rather casually performed mid-tempo pieces like "Aeons End" and all songs profit from the remarkably vigorous voice of the lead vocalist. This guy sounds like the personified masculinity. His performance could be more variable, but he has enough charisma to make a crucial contribution to the success of Extinct. (By the way the bridge of "Aeons End" reminds me of another song, but due to my quickly dying brain cells, I cannot say which one it is...)

The guitarists deliver lacerating riffs in abundance and the tight interaction of the protagonists serves as another proof for their experience. Sometimes maturity is synonymous with the preliminary stage of emotionless lameness, but in the case of Defiatory, things are totally different. There is a fire that burns, and it is kindled by musicians with an honest loyalty to the genre. The band is interested in catchiness, no doubt about it. But the intention to showcase memorable tunes is not at the expense of power, clarity and aggression. To keep an eye on catchiness just reflects the compositional intelligence of the Swedes I have mentioned in the first paragraph. Most songs get down to the nitty-gritty very quickly, but this does not mean that their impact does not last long. This implies sophisticated song-writing skills as well and the second album, which is thrown on the market in these days, must show whether or not the band remains a one-album-wonder. (I still wait for the sophomore effort of Evildoer, another thrash formation from Sweden that started with a great and stylistically comparable debut in 2005.) Dimension Zero, another similar formation, is silent since 2007, too. No good omens for Defiatory? I don't hope so.

Does it make sense to speak about the highlights, for example the very dynamic "The Black Vortex"? Not really, because more or less all songs reach a more than proper quality level. Thanks to the modern, accurate and well-defined mix, even the stomping parts of the songs do not sound primitive. Yes, modernity is not the root of all evil and the guys from Umeå surely know why they did not want a slightly rumbling old school sound. They work precisely and this approach does not fit the profile of an overly traditional, partly non-transparent production. And this is a keyword, because now I stop the production of this review in order to give you the chance to start listening to Extinct. Fans of pure, mid-harsh thrash will like it.