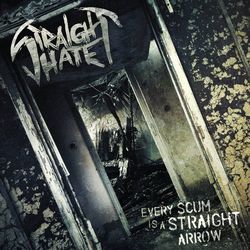 Deformeathing Productions stable finally comes alive and Straight Hate is a good example of it. Eastern Poland's quartet in collaboration with D. Productions gave us their debut album - Every Scum Is A Straight Arrow. Seventeen tracks of dense grindcore in a Swedish death-metal style will take less than 26 minutes and no more is needed to begin this review.

Although "Every Scum ..." is a debut album of Straight Hate, you have to know that half of the line-up also powers up death-grind commando Parricide. Even though both bands operate in similar genres, stylistically they are moving in two different worlds. Experience in musical and publishing fields resulted in an excellent production of the album. Each instrument is clearly heard in the mix, guitars purr as in golden 90’s Stockholm’s Sunlight Studio times, bass destructively growls, and drums and cymbals bang grind rhythms. Vocal is a completely separate story altogether though. Kuba expresses his hatred in three ways: low-sounding screams, tweeters and pig squeals. Straight Hate's music bears imprinted mark of bands such as Nasum, Rotten Sound, or early Napalm Death which can be perfectly heard and punk rock roots can be found in virtually every song.

The album "Every Scum ..." is…quite all right. It doesn’t strike over the framework of the genre, but while moving in those narrow musty corridors it uses the whole spectrum of their available resources. It can pummel hard and bury you under a meaty grind (e.g. Beautiful Slut), or when a respite is needed, it happens (e.g. Fuck It, This Is Grindcore). Deformeathing Prod chose Self-Deception and Disagreement for promo material, but in addition to the above mentioned pieces I would also like to point out The King Of Everything. The album passes the test as a whole - zero boredom, and however wild you go while listening is up to you.

"Every Scum ..." is a thing for fans of real grind pounding, and when live, the band stands tall for their trade… I know what I write because I have seen and heard them in the pub, where music so condensed does not necessarily sound good. They played in such a way that after a few seconds, I was by the stage banging my head - pure and sincere energy. No point to look for originality on this album, simply follow the advice of title of the sixth song - Fuck It, This Is Grindcore. This is not an album that will top musical charts or annual summaries, but it is so good to listen to - check it out for yourselves.