Straight Hate are four muggers who have been dabbing in death/grind extremes for 12 years. They've already added an EP, 3 splits and 2 albums to their resume. The last two albums struck with such huge blows, that to this day you will find traces of them throughout their reviews. They also marked off their presence on the stage of Brutal East Festival (IX in 2016). The release of "East Grind Attack" and "Black Sheep Parade" was a great excuse to exchange a few words with Kuba (voc.). 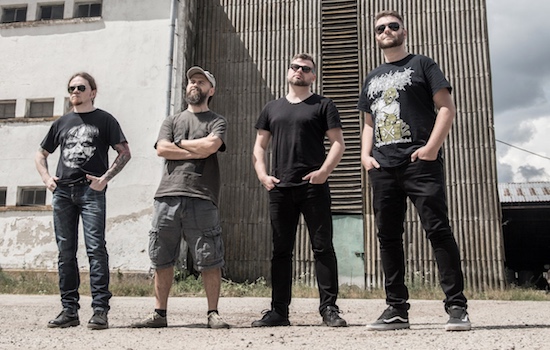 Hi Kuba, it's been almost 4 years since our last meeting at Brutal East Fest IX. You were fresh after your debut release then, now after "Black Sheep Parade", and right before - "East Grind Attack". What wore you out more: promotional campaigns or all this COVID crap?

Hello! I think the virus hit me the most. The insurance industry in which I work did not slow down, and I had my hands full. Difficulty of staying in contact with my clients additionally complicated the matter. On the other hand, I absolutely cannot complain because I was not affected by unemployment. Promotional actions are very tiring, but it is a kind of fatigue that is very satisfying, especially when you see the results of your work. I am always positively motivated by promoting something new. It's nice to be able to share your creations with people from all over the world, get to know their opinions and feelings after listening to fresh material.

You played a little bit here and there, and you even managed to score a few foreign fests. Are you satisfied or do you still feel unfulfilled?

At the same time, I feel both satisfied and unfulfilled, because when you play more and more, the appetite for the increasing number of concerts intensifies. Before the time of the virus, we were developing our performance activities very smoothly. I even planned a few in advance for the fall. Unfortunately, on March 8, our last concert took place in Warsaw and since that moment, like all bands, we are waiting for further developments. After all, we are very happy with what we have played so far and we continue to work.

Tell me, what is it about Lublin that metal thrives like tulips in Netherlands??? S.H., B. Of P., Ulcer, Deivos and I could keep on mentioning for a while ... Is this a reaction to the proximity of the Catholic University of Lublin, or rather the lack of employment pushes young people into such dark and extreme regions of culture?

It seems to me that this is simply due to the enthusiasm and active attitude of people towards creating music. We still have many committed people in our region who have not gone abroad. In addition, there has always been a strong metal scene in the Lublin region, so this tradition should be constantly maintained.

On our (eastern) side of the Vistula - in Białystok, you could also once find so many "beautiful" and various 'flowers', but that's history. Life also kicked us in the teeth with Cyjan's passing, taking away concerts he organized. How are you guys doing in these damn weird times?

I think that for a totally niche, little known band we are doing quite well. We realize that the GC scene in Poland has been slowly going extinct for a long time. Nevertheless, we still do our job the best we can, without looking back. There is no time to speculate. I think that the passing of Cyjan wrecked the entire underground scene, not only in our country. It is an irreparable loss. Personally, we have been on good terms with him over the past few years. In fact, our last concert in Białystok was for the 27th anniversary of Dead Infection...

Enough small talk, music is more important, he, he ... Thanks to the cooperation with Wojtek (Deformeathing P.) we are already after first listens of "Black Sheep Parade". Second album seems to be a bit more polite, maybe even more melodic, if we can even say that about grind core. How do you feel it, how do rate it since the publishing dust has settled?

As for politeness and melody, I agree with you 100%. This is what we intended from the beginning. When creating both the first and the second album, we wanted all songs to be primarily 'live' ready and accessible for people from outside the grind spectrum also. We try to follow this rule. After reading the opinions that reached us, I say that to some extent our idea was successful. Besides, we treat Black Sheep Parade as a mature album, fully thought through and refined in the way we intended.

What's new are you going to propose on "East Grind Attack"?

There will be 3 tracks on the split. One in the atmosphere of our second album, the other is a kind of gore / grind experiment, and we will end with punk.

I would not exactly say “quickly”. We are not bound by deadlines or contracts, we didn't have a whip over our heads, so we spent a little more time recording the material. The drums were recorded in the Roslyn studio, the guitars at home, the bass in the practice room, and the vocals at a friend's house. Our bassist Przemek with his wife and children watched over the mix and master, because he usually did it late at night at home. This is the production of the Straight Hate album short.

And how did it happen with Mr. S.? Planned or total spontaneity? Was it fun and you liked it, will it continue?

It was spontaneous. While composing 'Above The Law', I immediately came up with the idea of inviting Paweł. Whether the idea will be continued – it remains to be seen. We will see what the new music will look like. Maybe something interesting will come to our minds again.

Tell me, does Jakub listen to some metal after lunch or on the way to work or at home, or is it a radio or something else for a change?

Usually when I work in the field, I catch up with music because then I have more time. Coming home, I often play stations playing the 70s and 80s. From an early age I was brought up in these climates, so I do not hide my love and sentiment for the music from that period, even though I was not alive yet.

It is 300 km and then some from Lublin to Sucha Beskidzka, to Biała Podlaska about 130 km. How did it happen that you ended up in the hands of Wojtek (Deformeathing P.), and not at Karol's stable (SelfMadeGod R.)?

I sent our previous recordings to Karol before the first album. Unfortunately, we came to a time when he no longer had free publishing dates. The proposal to join Deformeathing was accidentally made during the 25th anniversary of Parricide in Chełm. Wojtek brough his whole kiosk to this event, and in a casual conversation that involved some high-proof beverages he simply asked us directly if we wanted to release an album with him. We did not think about it for a long time and we are still in this symbiosis until today.

This COVID chaos gives all of us a hard time, but as I know you, you probably are not staying idle and musical ideas grow not only thanks to the spring rain. Will you reveal at least a morsel of what is happening behind the scenes?

Yes, we do not stand still. We are currently at the stage of composing new pieces. Besides, I really hope that we will be able to play something this year and we are hopeful that nothing will stop our plans.

You can't overdo it with the grind, so let's not stretch this interview anymore. Thanks, Kuba and I hope to see you soon, because I miss your energetic kick in the ass.

I also thank you for the interview and the constant support from you and the rest of the dinosaurs from Podlasie!!! We miss playing in your neighbourhood very much. See you soon, hopefully!