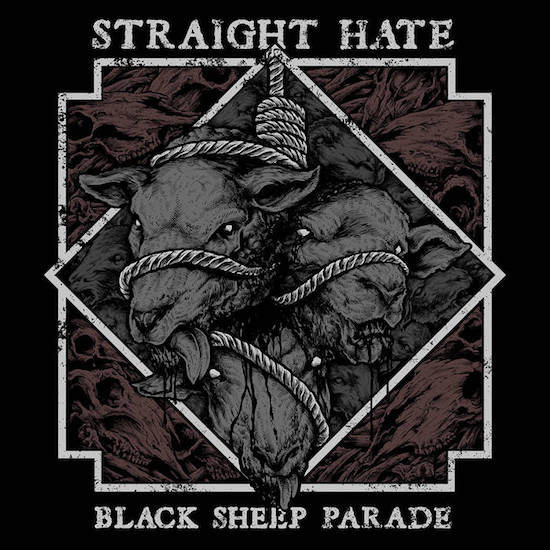 Three years after the release of Every Scum Is A Straight Arrow, I am pleased to enjoy the sounds of the second Straight Hate album. Black Sheep Parade consists of 16 songs lasting over 29 minutes, which gives an average of less than 2 minutes per song, but enough of the statistic, let's get to the music.

Start of the album reeks with a sweet stench of young Carcass and announces that Straight Hate are still hard hitters. That's right, it's Grindcore with a capital "G". It seems to me that compared to the first album - the sound has been smoothed a bit and now we have only a slight flavor of the specific Swedish whirr. If on the first album the Rotten Sound musical pattern was heard, then now Straight Hate became more Napalm. Sorry, guys for these verbal simplifications, but it is so in this fucked-up life that when artist creates from what’s eating him from within, and the listener pretends to understand and tries to put the sounds into words.

If the sound is softer how is the rest you ask? Well, the rest is exactly as it should be in a good grind album. Kuba screams in every possible way. We have hysterical shrieks, growls, melo-declamation has appeared briefly, and if that wasn’t enough, in 'Above The Law' Kuba was supported by Mr. S. vel Sonneillon, or Paweł Marzec (Blaze Of Perdition, Ulcer). Wizun also made sure that there was no boredom. His machine gun drum series are interrupted by even faster transitions, but he can also slow down. I believe Wizun is the first league of Polish drummers at the time and it all can be heard on this record. Przemek and Kamil also know well what the guitars are for and thanks to this Black Sheep Parade can be safely looped and listened and listened till it hurts.

Number "two" doesn't break any patterns however, as the title of the 6th song from their first album says - 'Fuck It, This Is Grindcore'. To me, the most important in grindcore are power, impact and energy, but given in such a form that I could last more than 5-10 minutes when listening to it and wanted to return to this music in the future. One goes back gladly to Black Sheep Parade. Before writing this review, I listened to this record well over 20 times and it didn't happen because of a duty to write a review. We all know review can be written after just one listen. You just inhale album like that and then spit words. Although after the first spin I felt the lack of this Swedish crunch, listening to the album in its entirety proved its other advantages. Songs like 'The Kneaders', 'Insurance Policy', 'Above The Law', 'Lost In Greed', 'Bastard' and 'Cribe Contest' are like icing or cherries on the cake. They bring a bit of freshness and diversity.

Finally, it should be added that the album was dressed with a cover by Maciej Kamuda and a 16-page booklet. I have not had the pleasure yet to crumple it in my hands, but I will do so as soon as possible, because such records must be celebrated.