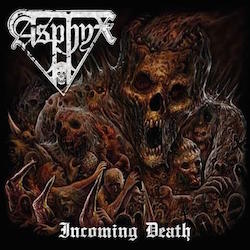 Perhaps it is unfair, but the first thing that called to my mind when listening to Incoming Death for the first time was that the riff of "Division Brandenburg" lies in close proximity to that of Marduk's unsparing war elegy "Wartheland". Or is it just the very similar atmosphere of these two songs or the fact that the lyrics of both tracks deal with the most difficult chapter of the German history that makes me think of Marduk's fourth track of "Frontschwein"? However, two things can be taken for granted. Firstly, "Division Brandenburg" has everything that a fantastic piece needs in view of its stomping drums and the typical abysmal riffs of Asphyx that were established by songs such as "Scorbutics". Secondly, the Dutch army with the competent German mercenary Stefan Hüskens on drums does not need to adopt other people's songs. Already the rather unusual mix of (more or less) pure doom monsters and rapid death eruptions indicates the individuality of Asphyx (in sharp contrast to the genre typical and pretty banal artwork). Not to mention the fact that the ambassadors of apocalyptic fierceness have proven their song-writing skills on the predecessors of the here presented work.

The band has not written the new climax of its discography, but there is no reason for concern as well. Frontman van Drunen and his henchmen have not misplaced their proven recipe. On the one hand, merciless neckbreakers like the opener and the title track connect primitiveness with violence and the effect is still amazing. On the other hand, viscous doom songs such as "Subterra Incognita" mirror the band's affinity for slow acting poisons and hold the heavyweight versions of Leif Edling riffs. Listen closely to the sinister "Wardroid"; the sequence that sets in at 2:08 invites the audience to celebrate a candle mass. The closer has to be mentioned in this context, because it stands in the tradition of "As the Magma Mammoth Rises". This means that "Death: The Only Immortal" combines grandeur with sluggish heaviness and the result is a monumental event. But due to my weakness for fast rhythms, I am of the opinion that especially each and every speedster works in a mind-blowing manner. Since the creation of extreme metal, brutality and velocity have always been a good team. Not to mention the efficient guitar work. The partially minimalist riffs appear as pinpoint stitches, while the full sound comes as a tank which leaves a trail of devastation. No doubt, the massive production sets the right frame for Asphyx' orgy of aggression. The sound of Incoming Death is not better nor worse than that of its two predecessors and this can be understood as a great compliment.

The small problem - and I would like to emphasize the word "small" (actually I wanted to capitalize this word, but there is nothing more incoherent than to write "small" in uppercase letters: "SMALL"... this looks so moronic, it pisses me off) - that I have with the album is based on the doom tracks. Some relatively tedious parts have crept in. While the fast pieces are the blazing flames of a conflagration - "Wildland Fire" delivers the fitting lyrics in this context -, "The Grand Denial" is only a smoldering fire. However, Asphyx have not forged lame fillers just to make the record complete. The vast majority of the riffs leaves a massive impact and the general aura of the album is the exact opposite of a plea for clemency. Guess it goes without saying that van Drunen plays his part in this respect. His voice sounds as inhuman as ever. From my point of view, he does not belong to the most charismatic singers, but he works authentically instead of intending to win a death metal beauty contest. However, the quintessence is that the deathhammer is still active. Asphyx do not enter new dimensions, but Incoming Death confirms the high compositional standard of the formation. Although the bonus section is pretty useless, the group retains its credibility and the regular tracks offer a high dose of metallic robustness. Highlights? With the exception of the rather pale "Forerunners of the Apocalypse", I recommend all tracks of the regular edition that do not surpass the four minutes mark.