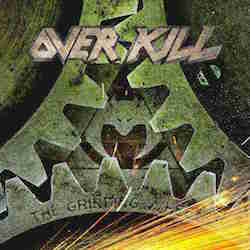 As much as the metal world showers praise upon its most consistent acts, it is also quick to take note of when an artist's work becomes formulaic. Sometimes, though, long-running bands will be hit with a bit of both, especially when they owe their consistent output to a winning songwriting formula, as has been the case with New Jersey's Overkill. Granted, their newer material that returns to old-school thrash with a bit of groove came after a long period of experimentation, but albums like Ironbound, White Devil Armory, and perhaps most of all, The Grinding Wheel, show that Overkill have returned to relevance in the modern metal climate. I have a bit of a personal connection to the latter album from 2017, since it was my formal introduction to Overkill when it came out, but nonetheless, I do feel that it has the strongest tracklist of any Overkill album released since 2010, despite recycling a few riffs and ideas. The Grinding Wheel is a worthy introduction to a thrash institution like these guys and would be highly likely to garner new fans.

Musically, the band is focused on attitude as always, but the groove metal influence is more evident this time, especially in the main riffs of 'Goddamn Trouble' and 'Come Heavy'. Some may criticize the latter songs for trying too hard to give off a "tough guy" or "badass" feel, but Overkill succeed to a greater extent than many thrash metal bands, since their music has always carried that sour NJ attitude, helped by Bobby Blitz's distinctively abrasive vocals. 'Mean, Green, Killing Machine' and 'The Long Road', however, build up to the aggressive side of things with admirable instrumental work, where DD Verni's grinding bass tone earns the album its name. On that point, the culminative title track nails the brooding, oppressive (almost thrash/doom) atmosphere that Overkill have flirted with before on tracks like 'Playing With Spiders/Skullkrusher'. For a longer album with many tracks between 5 and 7 minutes, it was wise to place the brooding and intense title track at the end.

The Grinding Wheel takes full advantage of Bobby's mastery of thrash vocals, with virtually every song having a memorable vocal hook. The disadvantage of this, however, is that the band gets away with a few less than inspired riffs that may sound awesome to a first time listener, but would be something of a letdown for a more involved fan. The drumming, however, does redeem the compositions largely because it hits harder than the drums in a lot of other modern thrash, giving the band infallible momentum. The fills before the verse in the third song, 'Our Finest Hour', for example, keep the intensity built by the first two tracks up and this makes for a better execution of a groove metal inspired breakdown than most could pull off.

Overkill have a formula and they stick to it, in order to make outstanding thrash albums like The Grinding Wheel over 3 and a half decades into their career. Overall, I would consider this to be one of the strongest thrash metal albums released since 2010's, and a good starting point for new fans expecting some kick to their thrash metal.

Overkill brings a similar form of thrash to the table as on previous releases. The music here is rollicking and captures a groovy vibe very well. It is distinctive of the band’s sound and very honorable to the past. In fact there hasn’t been many changes in recent times to Overkill’s music and one can sense it’s time for something new soon.

This is still a very fun release and the band seems to be thoroughly enjoying their craft. The sense of fun permeates the release and makes it very entertaining to listen to. Though it isn’t entirely original, there is a sense that the band poured their hearts into these songs and it shines through. The songs are very raw sounding and this is due to the band’s no holds barred style. There is still a musicality to the songs that is enhanced by the production of the album. How does the album fit into Overkill’s discography? Well, it is a step below Ironbound, but perhaps equal to their last couple of releases in terms quality. The guitars are punishing, yet makes for a tuneful listen at times. The singing is the typical Bobby Blitz approach that is very raucous, yet enjoyable to listen. Drumming nicely forms the backbone to the songs. The overall sense of the performances is that they’re quite effective and enjoyable. This can be seen from the song 'Mean Green Killing Machine' which features a nice variety of thrash goodness.

There has been a lack of thrash releases recently, so this album fills in the hole nicely for a new release in the genre. Though it doesn’t do anything entirely original, it is fun enough to be a quality entry to the genre. Thrash fans should find something to like immediately with The Grinding Wheel.