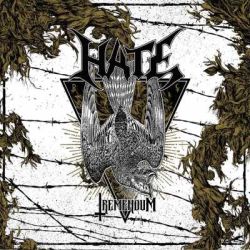 It took me a while to sit down and write about this album. My initial reaction to this material was: "Nah, you can hear it's Hate, but...". And only this month I've been encouraged by Tom to give it another go. And it was definitely worth it. I think I understand now what exactly triggered this first feeling of disappointment - it IS Hate, no doubt about it, but it's completely new Hate, so it was not what I actually expected from this album.

So, first of all, I would probably think about changing the clasification of Hate's genre - it's not pure death metal anymore. At least when it comes to guitars and drums, Adam's voice is still deep, earth-shaking, stomach-driven growling. Guitars and drums point to blackened death metal now. Guitars have less of low frequency tones, more chords and quite a lot of riffs remind me of black metal bands like Satyricon or Dark Funeral for example. You might hear some other bands as well, these two were just mentioned to describe where I see the origin of some riffs. And it's brilliant! Works so well, especially with Pavulon's amazing drumming, actually reminding me of Satyricon's Frost, with some rhythmic constructions bringing back the memories of my favourite Satyricon's albums Rebel Extravaganza and Volcano. Knowing this now I can look differently at the whole Tremendum. The album presents quite a lot of black metal riffs, there are a lot of chords, melody lines played on higher notes. That doesn't mean that there is no death metal here but, as I mentioned before, this is blackened death metal now. What is fantastic about this piece is also quite large amount of astonishing solos, it is amazing how after filling it with so many different melody lines Adam has even more ideas how to make all of these compositions complete by adding matching decorations. Each track has quite frequently changing tempo, but everything fits in this whole theme of war and destruction, definitely with large input from Pavulon, whose drumming is definitely up to the challenge to make crushing wall of sound that is supposed to resemble the lyrics about violent end to all life.

The most interesting tracks to me here are: the opening "Asuric Being", with great entry giving the taste of things to come and an end actually depicting the end, second track being "Sea of Rubble", probably the most old-school-black-metal sounding fragment of this album. The last track that I keep on listening to is "Walk Through Fire", probably the most brutal and aggressive composition on the whole album with interesting part of text being growled in Polish. Obviously you can hear some black metal riffing here as well and quite unusual solo.

To sum things up, everything is as Adam announced during his interview with Arek, the old formula didn't work any more and this album is the first chapter of Hate's new style. This chapter is definitely filled with rage, aggression and high-quality, fast-paced rhythms. Somehow you still know that it's Hate, its signature is almost in every sound, but you can hear that it evolved. The only thing that I'm missing is that spacious atmosphere that was present on Anaclasis or Solarflesh, created by those mysterious ambient sounds in the background that you always had to listen to very closely to recognize them and work out their whole melody line. Impressive come back, one could say "tremendous" and I already can't wait for the next opus.