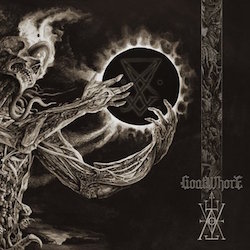 So, it's been three years since Goatwhore's excellent Constricting Rage of the Merciless, and for me personally, the wait has been a long one indeed. Having loved that album, and pretty much all of their previous offerings, I couldn't wait to sink my teeth into this. I've also been a fan of Acid Bath and most notably Sammy Duet forever now, as I also love the work he did with Crowbar - another one of my NOLA favorites.

I'll be honest - I didn't care for even the name of the album when I first heard it. Vengeful Ascension? Ehh. Anyway, then the album cover dropped, and I didn't really like that, either. Keep in mind, Goatwhore are one of my favorite bands, so these are all legit tough things for me. Then the first song dropped ("Vengeful Ascension") and I thought okay, this must be one of the slower tracks on the album. Not one I would try to promote the record with, but whatever. I guess the rest of the album is better.

Well, it is, and it isn't. I won't be going into individual tracks too much, but for me, the whole listening experience here is rather quite dull and uninspired. There are a few stand out tracks, of course, but most of the album, as much as I hate to say it, is forgettable. Utterly and completely forgettable. Gone are the razor sharp and catchy riffs. Gone are the interesting arrangements.

The album actually starts off pretty promising with "Forsaken", but then it quickly goes pear shaped with the tracks following it. Only nearly ten minutes later does it pick back up again with "Chaos Arcane", which is the closest thing to classic Goatwhore on here - with good riffs, excellent drumming, and a good vocal performance.

Don't get me wrong, there is nothing wrong with the musicianship on this record. The songs themselves are just dull - that's the problem. I mean, no one really wants to sit through a track like "Where the Sun is Silent", come on. It's frustrating because these guys are all complete badasses at what they do, and I know they can do so much better than this. How did this even make the final cut? No one else fell asleep during this song so they decided to put it on here? Sorry guys, but this is not good enough.

The album picks up the pace once again, but it struggles to get any kind of momentum going, despite Zack's terrific performance throughout the whole album. The songs start and they just kind of go nowhere, and with no purpose.

There are some really excellent moments though, such as "Abandon Indoctrination", where Goatwhore put on their black metal faces and just kind of go for it. "Mankind Will Have No Mercy" is another stand out, and just the classic Goatwhore we love and come to expect. When they fall into the groove - and it doesn't matter which groove it is - Goatwhore is a seriously deadly band. The problem with this album is that they just have a hard time maintaining any kind of balance or consistency. Yes, consistency. That's the word. That's what they are struggling to hit throughout this album.

Overall, I was pretty let down by this. And I really hate saying that. Trust me, I love Goatwhore. My Last FM profile says they are my most listened to band ever with nearly 3000 plays. I have their entire back catalog memorized. But this one just didn't do it for me. It's not fast or aggressive or angry enough - it leans more towards atmosphere which can be fine for a while but when that is the bulk of an album, I lost interest quickly - and especially during a month when Dying Fetus, Origin and Decapitated have also released albums. I would much rather listen to them than this simply because the song writing is more interesting.

Goatwhore is a band I will never be writing off, no matter what happens. Some albums just have that magic you're looking for, and some just don't. This one doesn't. I will patiently be waiting for the next release as I know these masters from NOLA can do a lot better than this.

Goatwhore’s music spews forth with venomous intent. This is music that rollicks along at a nice pace and puts forth the pedal on the metal. The songs are doomy, but more rooted in the sludge, black metal and death metal genres. While it doesn’t belong exclusively with one genre, the album seems content to jump around to different genres at the blink of an eye.

What seems to be consistent with all of the songs, however, is the groove present. The songs will induce head banging in the greatest sense possible. When we break down the band musically, we can see fine things. The vocals are spiteful, but accessible enough to dig into. The guitar riffs have that same element of groove that something like Celtic Frost has. The drumming provides a nice backdrop to the remainder of the music in fine fashion.   Altogether, the music of the band is tight and fiery. The music of this band seems to be most rooted in the sludgy type that has a strong NOLA element present.

The tunes here are successful, but perhaps not the best the band has shown us. That honor would go to my personal favorite Blood for the Master. Still, songs like Where the Sun is Silent have their own unique impact on the listener. The mid-paced groove of the tracks is wonderful to behold and unique to the band’s sound. Still, there isn’t anything overly original to be found on this recording. If you’ve delved into the band’s back catalogue at all, you’ll find songs that are similar to those that are found here. Still, this formula is one that is exciting and still sounds fairly fresh. Thus, make sure to check out Vengeful Ascension.