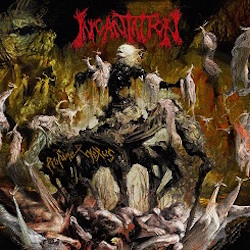 As much as the metal community seems to value a band with a consistent album output, every so often, especially with truly extreme metal bands, the community just can't wrap their heads around the songwriting effort, passion, and creativity that goes into any one of the band's records excluding their early classics. In truth, plenty of the newer releases by these extreme metal bands compete exceptionally well with their early work, but you wouldn't know that if you always believe the historical canon that blows debut albums up to legendary proportions before your own eardrums. Moreover, consistency is often taken for granted, as listeners treat the band's catalog like the output of a well-oiled machine rather than the conscious effort of willful human beings. Stop dehumanizing musicians, especially Incan-fucking-tation, because their brand of doom-swamped death metal is already, and always has been, adequately nihilistic and transcendent beyond mortal, fleshly concerns. All I'm saying is, if 2017's masterful Profane Nexus had been released in 1992 instead of Golgotha, rating it lower than the average for some Lamb Of God albums on this website would get you fuckers crucified upside-down by the extreme metal vanguard. Don't bullshit me with "it would've been more innovative if it came out in 1992!!!!!!!" because in no way is this album auto-pilot, uninspired death metal - it tops all their albums in terms of songwriting, excluding Nazarene and maybe Conquest, with a superior sense of direction and yes, even melody (dark, funereal melodies that is). What we have here is immensely enjoyable and truly atmospheric death metal mastery, not hokey ambience without any riffs for pretentious suckers.

Am I biased towards this record? You betcha. It fit snugly into the period where I was first getting deeper into old school death metal with more focus on atmosphere like Morpheus Descends, Funebrarum, Crematory, or Demigod, around the time it first came out, and it topped off 2017's summer nicely. Furthermore, it was also a huge part of the soundtrack to my 2018 summer camp counselor days, wherein I would go from teaching 11-year olds the bowline and helping them get their swimming merit badge for the afternoon to being a bestial caveman practicing gutturals behind the staff lounge in the evening. To be barely 17, discover atmosphere-driven extreme metal, and still be looking forward to college again, my my. But yeah, Profane Nexus has everything the heralded classics of the style have and it absolutely blows your modern "elite" like Tomb Mold out of the mo'fuggin' water, kinda like Beethoven schooling Justin Bieber in that one rap battle from 2011.

Ok ok, time to talk about the actual music because you probably don't believe me just yet. This album (although this describes Incantation in general), gets tremolo riffing in death metal right, because it follows an actually sinister progression that works for the same reason the best film scores do, and I do reckon that that's one reason this album feels larger than life and "theatrical", even. 'Muse', 'Rites Of The Locust', 'The Horns Of Gefrin', 'Lus Sepulcri', they ALL sound distinct from one another because they focus on being driven by progressions that convey a mood for each song. But Profane's riffing doesn't slouch in terms of rhythm, either. The dirgey bridge of the opener or the meat and potatoes of 'Visceral Hexahedron' would make the riffiest doom bands proud, especially with the pinch harmonics at play - not to mention the cryptic crawl of closer 'Ancients Arise'. I also really like the mid-paced feel of 'Omens To The Altar Of Onyx' so, as you can tell, every song serves a purpose on this album, due in equal parts to the pacing of the tracklist and the fortitude of the actual compositions.

Now, what does all this set the foreground for? HYPERGUTTURAL vokills from none other than John McEntee, that actually reflect the feel of the riffing he delivers - it all feels so intricate and winding without being overly technical, to where you can't even hate the clean production because it lets everything shine! In fact, I would even say that the clean production Relapse went for makes this album feel fresh because it partially subverts the expectations for murky-sounding DM while still feeling welcome in that familiar niche.

The guitar tone here feels very juicy as well, the distortion really slices through and it doesn't sound airy at all, which is the perfect compliment to John's meaty, diaphragm-driven death growls, further cementing the solid relationship between guitar and vocals on Profane Nexus. The snare drum sound is very organic, too. Together with the guitar and bass riffs it really grinds your guts to a pulp. The only other bands to get all this right with their instrumentation, in recent memory anyway, would be Witch Vomit and Hyperdontia on their respective newest full-lengths. Incantation is, as always, in good company!

This is a fascinating album, and anyone who is first getting into atmospheric DM will appreciate it, if they can look past the fact that it's not typically regarded as an exceptional modern classic. This is the type of album that will further cement your appreciation for quality songwriting and atmosphere in death metal, which is why I'm telling you to listen to it on all available formats right away. I've done my very best to explain what makes this album far from the unmemorable, autopilot death metal out there today, so take that for what you will, but just know that I will laugh at you if you disagree.