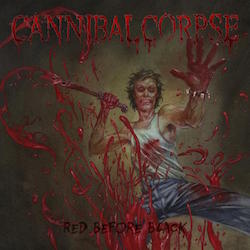 This album delivers everything that's essential in a death metal record: speed, guttural vocals, great mixing/production, and just balls-out intensity. The riffs are totally fresh. Corpsegrinder is leader of the band setting the tone for yet another gruesome Cannibal Corpse release. This one is probably one of the better "newer" releases by this band. Not to say that their previous bombs, but it's just better sounding production-wise and better riff-writing. I think it's their strongest release since Torture. Hopefully, they'll come out with some new music in 2020. With the whole ordeal relating to Pat O'Brien, I hope they do!

Every song on here is good, they're in B-Flat tuning, way different then standard or E-flat in their earlier days. Cannibal Corpse has had multiple good albums and multiple flops. But the positive releases have out weighted the shitty albums. They seem like they've really come into their own musically. Meaning the music keeps getting better. They just nailed it here. All different tempos, leads, but one thing that's consistent are the vocals. Corpsegrinder is just guttural on here, no screaming. It'd make it a little more diverse, but this is what they put out so be it. The guitars and vocals are usually what I focus on in music so yeah, solid release!

The one driving force behind the band are their fans. So many bands have just disbanded over the years, CC has stayed together. No matter what ordeal or line-up changes they've made, they're still kicking ass. I'd say this one is unrelentingly good. Definitely worth a "B" rating. The only thing that I've never liked with the band are the lyrics. But it doesn't matter, the music is what's most important to me. A lot of people cannot relate to Metallica's lyrics, but that doesn't stop people from liking their music. Cannibal Corpse the same thing. The lyrics suck (to me), but their music is supremely good. Especially 'Red Before Black'.

I would just go ahead and buy the CD (if people still own CD players like me) or download the digital album on Spotify. Either way, you're getting to hear the heart go into this release. It really is amazing that they've put together such an awesome album after a few mediocre previous releases. Or at least their last one. The energy is all there on this one so shows the band support. As a fan myself, I own the CD and have the album on my Spotify gadget and computer. I've listened to it enough to say that they've really done a great job here. Cannibal Corpse rules on!

Cannibal Corpse are back with their fourteenth full length album, and unlike other bands who may still be struggling to find their own feet and sound, the boys from Buffalo have no problems whatsoever in this regard. Their sound is set in stone. Has been set in stone for ages. For the past five albums, Cannibal Corpse has merely been perfecting it.

I’m happy to report that there have not been any lineup changes. The Corpse line up is one of the best in death metal; what I consider to be an all-star lineup. You have the mighty Corpsegrinder on vocals, Alex Webster on bass, Pat O’Brien and Rob Barrett on guitars, and Paul Mazurkiewicz on drums. While Paul really cannot compete with many of death metals finest drummers on the scene right now, he doesn’t really have to. Because like Cannibal, his style is set in stone as well. It would be hard to imagine a Corpse without him.

One thing I need to get off my chest is that I really dislike the album cover. I’ve seen better, and I’ve also seen worse, but it just looks too cartoonish to me. I would have preferred something more brutal, as I don’t think it represents the sound or the songs on the album very well.

The band waste no time and get straight to the point with “Only One Will Die”, and first thing you will notice is that the album sounds superb, sound quality wise. Erik Rutan has done it again, getting everything heavy as fuck and also clear as glass. This was designed to melt the skin right off your bones.

The album is a good mix between slow, groovy Corpse (which I love) and also faster stuff, which I also love. Most of the album is around mid-tempo though, which is perfectly fine, as it just makes everything sound so much heavier.

Speaking of heavy, one thing I need to make note of in regard to this album. Some of the songs are tuned down to G#. I don’t know if you know what that means, but basically it means that everything sounds heavy as fuck, to an almost ridiculous degree. Pat is using 14-56 string gauges on this thing for fucks sake. That is just downright mental. On songs like “Firestorm Vengeance” the guitar sound just kicks you right in the face. There’s not a lot that can prepare you for it, it just sounds absolutely sick and filthy.

Performances throughout the album are all top notch. I can tell that Pat has basically tracked almost all of the rhythm guitar parts on this, because they are air lock tight. Corpsegrinder gives another convincing and stellar performance, Alex is well, Alex - the dude is a legend, and he pulls out all stops on this album. Even Paul, who is usually regarded as being the least interesting member of the band, puts in quite a fine performance, changing it up with his drum parts as much as he can. It’s quite refreshing to hear what h does on some of these tracks.

Song writing, as one would expect, is solid. The album grooves, grinds and pummels you for a solid 46 minutes.

While I can and will always appreciate a new Corpse album, were fourteen albums into it now. A part of my brain is wishing that they would try something different. Not crazy different like changing their sound entirely, but perhaps different arrangements or concepts. That said though, there are some very creative lyrical ideas on this disc. “Heads Shoveled Off”? Hell yes. But music wise, after 3-4 songs everything just seems to kind of blend into each other, because there is not enough variety in here to keep you interested in a full 40 minutes. More tempo variations or fucking around with the general flow of the album, as opposed to concentrating on individual songs for example could be an idea. But that said, it’s not my band. But if it were, I’d be exploring some new territory by now.

All in all, this is probably their best offering since 2006’s Kill, and that album was an absolute monster. While it’s not as memorable, there are certainly some fine examples of death metal on here, as the mighty Corpse are not known to let down their fans, like ever. You just won’t see it happening.

Overall, this is definitely worth picking up. If you’re a die-hard Corpse fan you have this already and love it, as its just really solid, no fucking about death metal. For newer fans, there are some real gems on here and should help convince you that yes, indeed Cannibal Corpse are still as badass as ever.