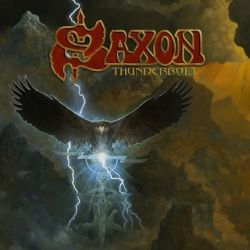 Perhaps it is not the most original action to record a tribute to Motörhead after the death of Philty, Lemmy and, most recently, Fast Eddie. Perhaps Saxon have never been the most original band. Perhaps "They Played Rock and Roll" is just another, not very original number with a conventional pattern. But one thing is for sure, and I say it with all due respect to everybody who does not share this point of view: this song is an absolute giant. I bet: 99% of the people who do not love this piece do not love heavy metal in general. An irresistible riff drives the song forward and the further components hit the nail on the head as well. A comparatively fast rhythm (it's the only number here which borders on speed metal), generic yet fantastic lyrics and the familiar voice of Biff shape a real earworm and a new classic. This is their next monument after the overwhelming title track of Battering Ram. No doubt, Saxon are more than Denim and Leather or Strong Arm of the Law and they still have something to say. In my humble opinion, this separates them from Judas Priest.

Okay, the new title track is significantly weaker than that of the predecessor, but the transition line "Unleash the Gods of War" stands out and the very typical pattern of the number represents the album in a pretty proper way. By the way, its lyrics refers to the Greek mythology. Cerberus and Zeus appear, Icarus is mentioned in another track. Even Nosferatu stops by for a cup of tea in order to start bilateral discussions between Greece and Romania. But I digress. Let's get back to the title track, it marks a solid start, but it does not blow me away.

Songs such as "The Secret of Flight" are punchier. It goes the way that tracks like "Circle of Light" have already taken. A lively riff introduces the song, comparatively strict riffs follow, and both the melodic chorus and the atmospheric solo contribute to a strong overall impression. Its mid-paced tempo dominates the entire output and that's positive, because "Sons of Odin", a slow moving, slightly majestic piece reveals little signs of weariness and it distantly reminds me of Running Wild's extremely generic and a little bit amateurish "Evil Spirit". In view of this association, I prefer more biting tracks like "Predator" or "Sniper". Do they offer something new or at least unexpected? No, but they show a band in its element. Only the growls in the background of "Predator" do not make any sense. I don't want to hear the average voice of a death metal vocalist - I want to be entertained by Biff. After Lemmy's death, he is the last credible elder statesman of heavy metal and he does not need help to interpret Saxon's music successfully. His voice creates vibes that combine nonchalance and rebellion, dignity and aggression in a unique manner.

Let's speak about the production. Well, does anybody expect a sound chaos? Or thin guitars? Miserably deflagrating drums? Or any other major defects? Of course not. Andy Sneap knows what he is doing. Battering Ram was minimally rougher, but Thunderbolt has the usual Saxon sound, a mix of power, transparency, compactness and well-dosed harshness. No matter from what perspective it is looked at, the album meets the expectations, no more, no less. It has a few weak moments, for example the lackluster bridge and chorus of "Roadie's Song", and I have no idea why they offer "Nosferatu" twice, but from a bird's-eye view, nothing hurts the harmonic picture. Philthy, Lemmy and Fast Eddie (R.I.P.) would like it. Wait a moment, I think I hear a dirty, boozy and well-known voice from out of the sky... "they are Saxon... and they play rock and roll". Cheers to all who like this sound wherever they dwell - in heaven, on earth and in hell.