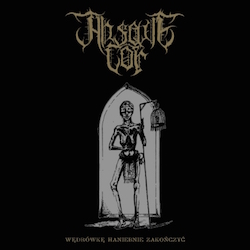 Most recently I've heard about an interesting label, Godz Ov War, releasing some proper underground bands. One of them instantly caught my eye - Absque Cor (from latin: heartless). Why? First of all - the album's title and all tracks' titles are in Polish. It seems that even big bands, like Vader or Hate, recently try to record some tracks that have entire lyrics written in Polish or at least some part of them, which I suppose is quite a challenge. Not every vocalist is able to growl in English and be able to do it in a way that you can understand the lyrics, so growling in Polish, with all "szcz", "ś", "ć", etc. must be even harder, so recording an album with all lyrics screamed in Polish - impressive.

So, first of all, the production is very good, you can clearly hear all of the instruments, guitars and bass and drums together with the screaming, so kudos to Trzecia Zmiana Studio and Vos, who not only played all instruments, did all the vocals, but also did all of the mix and mastering.

It's slightly difficult to describe the style of the band. First two comparisons that came to my mind is French band VI and Turkish Episode 13. It's obviously a black metal, but with that dark atmosphere that those two aforementioned bands have. But there are few elements that are definitely unique for this band, like sudden introduction of classical guitar in "To co w człowieku nieuniknione" ("Of that, which in a man is unavoidable"), later also used in "Zdecyduj więc sam którą wybierzesz drogę" ("Decide on your own which road to choose") and "Do Niezbawienia" ("To Non-Salvation"). But the whole album has its own dark atmosphere that is just too hard to describe in words, you have to listen to it.

The technical side of this 4-track album is really good, the workshop behind the furious riffs and fast blast beats on drums is pretty solid. And the balance between all instruments and vocals is perfect, all sections can be heard without any problem. The shortest track "Do Niezbawienia" is 6:12, the longest - "Zdecyduj więc sam którą wybierzesz drogę" - 10:10, so even though it's only 4 tracks, it's good half an hour of material (an average length of Deicide's full album for example).

The lyrics are about death that is a total end to everything, complete extinction, after which there's nothing left. And the tracks' titles suggest some suicidal underlay, so basically the overall tone of the whole poetry is fatalistic and depressing. And yes, this is definitely a good piece of modern poetry, it's not just your everyday words, the entire lyrics about death, vanishing, depression are written using poetic language, so if you're interested in finding out what would Baudelaire or Miciński write if they were living in XXI century - grab this album.