Absque Cor's album titled "Wędrówkę Haniebnie Zakończyć" ("To Shamefully End the Journey"), which was recorded and mixed by an artist introducing himself as Vos, is quite an interesting release. I've been given the opportunity to ask few questions that were rattling inside my head after listening to it. Here they are... 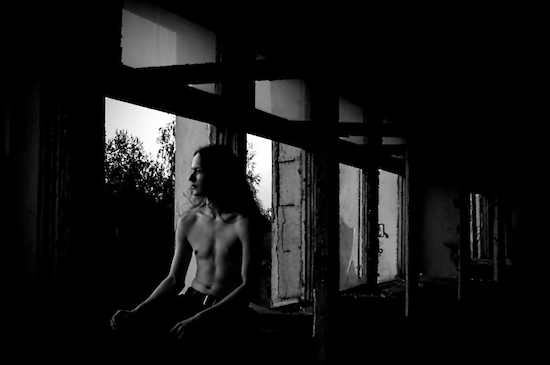 Listening to Absque Cor's album triggered some associations with French VI and Turkish Episode 13 - are these bands that you heard of or maybe are listening to them? What are your inspirations?

I've heard VI's album De Praestigiis Angelorum but it was released at the time when I was close to recording stage, so musically and composing-wise everything was already prepared. I've never heard of Episode 13. Regarding inspirations, when composing I'm trying to transfer musically things that surround me, in case of Wędrówkę Haniebnie Zakończyć it was some events from few years period that have a common denominator.

You mention that you are composing mostly on a guitar - how does the recording process afterwards? In what order did you record all sections?

Guitar is my prime instrument so it comes out naturally that I begin laying down my thoughts with this instrument (I'm talking about Absque Cor here, as it varies in the band), although it happens that I also have much larger concept than just the guitar that I want to introduce. First I recorded pilots to which I assembled drums, then I was adding bass and finally vocals. After recording pilots and making few corrections I brought the instruments to the studio, where we recorded everything, apart from drums, live. Here I was recording to the previously prepared drums in order: guitars, bass, vocals.

What is the progress with your new project, has the album been recorded, mixing finished? What style is it? How much will it be different from Absque Cor?

Yesterday I sent the corrected mix for the mastering and we'll start sending out the album in a matter of days. You could say that these tracks contain two styles, both based on black metal, but different from each other quite a lot. There will be some difference in lyrics as well because part of them were written by me and the other part by the bassist and one we did together. Comparing to Absque Cor it will have different lyrical subjects and slightly different style but I think that you can also hear some similarities. In the end the same guitarist plays in both projects.

Is there any new Absque Cor material being prepared or maybe even ready?

Yes, at the time of the album's release I already had plenty of constructs and few new ideas appeared since then, some tweaks and a lot of inspirations, but there's a lack of skills to transfer them to sounds. Unfortunately I'm not able to tell you when I'm going to start thinking deeper about registering it. Most of all there's a lack of time and abilities.

Are the lyrical themes similar?

I already have a concept on how to write about thoughts that will be included on it but I don't want to spoil anything and let the time to take its course.

What are the biggest changes that happened since the first album (musically, lyrically, equipment-wise)?

Lyrically - I don't know as none of them are written down, musically - a lot has changed, it definitely won't be as gloomy album. I am going to allow myself for some improvisation, too. Equipment - nothing has changed, the same guitar, sam amplifier (one and one, because on Wędrówkę... we used two different guitars and two amplifiers). The worst thing is that my friend who owns the studio I was renting recently moved out of Mielec so the place to record is also a big question.

Can we expect similar lyrics, dwelling on the subject of depression, death and suicide?

Have these subjects appeared as a result of your own experiences and thoughts or are you playing a role of a comentator telling a story about someone you know?

Have you thought of performing live?

When it comes to Absque Cor - no. First of all, I don't like to play live. Secondly, I would have to find two guitarists, if guys from the band would like to learn these tracks and play them, unfortunately I don't know such guys. Thirdly, we more likely want to (they want, I don't want to limit them) play something live.

Is it possible that the other band could play at least one of Absque Cor's songs live?

Definitely not whole. But generally I doubt it.

In your previous interviews you told a little about secrets of mastering and problems with one of the guitars - can you also share some secrets about what instruments you use?

The gear that I have is customised 7-string guitar from "Husar Guitars" from Mielec, company managed by very good luthier and my friend Wojciech Dobrzański. It's got only one pickup, Merlin Hellfire, 7-string version. Amplifier that I've got is Marshall DSL 50 and head also from Marshall 4x12 on Celestion G12T-75 speakers. Regarding the problems, I also had a second guitar, also from the same gentleman, some customised converter, Buger Trirec Infinium amplifier plugged in Harley Benton 2x12 Celestion V30. It sounded fucking excellent live, but microphone because of its characteristics caught it slightly different. Since that unfortunately there's no separate room and the amplifier was turned up quite loud I heard it after recording everything and had to play a lot with the equiliser to level this guitar.

Do you have any favourite guitars/pickups/effects/amplifiers?

I'm supporting local, small enterprises. I've had the same guitar for probably 5 years and I'm not rushing to change it, I also wanted custom amplifier, but it unfortunately didn't click, so I'm rather not an interesting interlocutor in this subject. (As if I was in any...)

Do you prefer more natural sounds or more synthetic?

In some genres, where it works I much more prefer natural sounds, I record my bass from amplifier and I know that a lot of professional studios do it linearly. I prefer passive pickups in guitar. Generally speaking I am quite open to music and I don't mind synthetisers, even use them myself from time to time. When it comes to working in the sturio I prefer a low level of compression to exactly keep the naturality and dynamics in sounds.

You said that you mostly listen to black metal - what releases that recently appeared would you recommend? Is there any album that regularly come back to?

Exactly, when it comes to metal I listen mostly to black metal. When it comes to music in general, in recent months I listened mostly to dark jazz and from this genre I can recommend bands like Bohren & Der Club of Gore, Killimanjaro Darkjazz Ensemble or Dale Cooper Quartet & The Dictaphones. From new black metal albums only one came out this year that made quite good impression and it's Misanthropic Rage. There are quite a few of albums that I return to regularly. Definitely Silencer - Death Pierce Me, Summoning - Stronghold, Shining - IV The Eerie Cold, Furia - Marzannie Królowej Polski, Burzum - Hvis Lyset Tarr Oss, Psychonaut 4 - Have a Nice Trip. And Lifelover, to which I haven't returned for a while but have a feeling this moment will come soon.

What are the nearest plans - live shows or composing/recording?

Recording definitely not. At the moment the band will press on live shows and in the meantime I will be coming up with some ideas, as mini-cocept is ready.

Thanks to Vos for the interview and to Greg for help in arranging it.