Druid Lord is back with new album Ladies and Gents!! Five years passed since their latest EP was released, and eight years since the debut full length. There were some splits in there too. They're not in a rush obviously, but when playing doom metal - how can you be? With all jokes aside, doom metal is the base for Druid Lord's art, and while they add some death to it and finish it with some horror lyrics is must be said that the final product has a potential for becoming the death/doom album of the year. Don't miss out on listening to it! However, before you give them a go, check out what Peter Slate had to say about their newest album Grotesque Offerings and some other stuff. 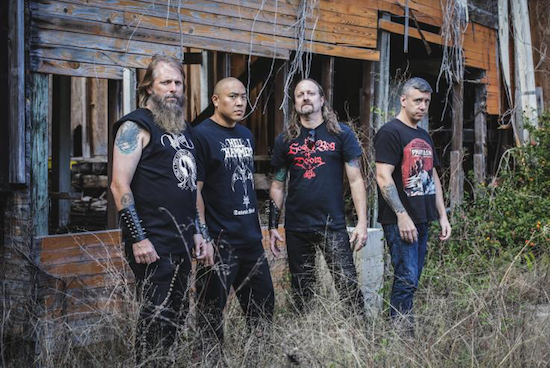 Hey Peter! Thanks for doing this interview, how's everything going?

Great my friend, we are very excited as the album is selling very well. The double LP vinyl just came out a few weeks ago and the packaging is amazing. We have a series of shows planned here in FL for the next few months, and then we plan on hitting the road at the end of summer.

I've read somewhere about your fascination with old school horror movies, what is you absolute best and why?

Come on man that's too hard of a question (laughs), I can't even imagine. My favorite period of horror movies is from '67 to about '84. The old school "B" movies are the best. Anything with witches, castles, vampires, dark ages, twisted deformed mutated families, the wandering dead... [laughs]

Better yet!! What about best 3?

Mark of the Devil is one of my top favorites, Halloween, and the original Texas Chainsaw.

How many of your favorite movies ended up being in Druid Lord lyrics?

Quite a few actually. Texas Chainsaw Massacre, Baron Blood, The Crazies, Inquisition, Pit and the Pendulum. ....We just didn't write about the movies we took our own spin on the concept and did our own version.

There is a song on the album called 'Black Candle Séance' that you decided to re-record. What was the reason for doing it again and how did it come about?

We play 'Black Candle Séance' live a lot. People never knew it came off a split 7ep. We actually play it slower now and heavier, so we wanted to record the new version. The version people hear when at our gigs. For me personally it's a song I never get tired of playing live.

How long did you work on new album? Can you tell us about it, about the recording itself, and how satisfied are you with the outcome?

The album was a long process. The writing took the longest because our original drummer left during that phase. Once our current drummer Elden joined up, we had to rework the songs. We recorded the album at our singers/bassist Tony Blakk's studio. All the drums, guitars, everything within four months. We then had album mixed and mastered in Finland by Mikko who does a lot of the Hooded Menace stuff. I'm very pleased with how heavy the album came out. It's crushing. The drums still could use a little work, but overall - with the time we had left, I'm very satisfied. The label had other bands before us being produced, so we had to wait months for the production to kick in. Worth the wait.

Was there anything that you did differently in the writing process of Grotesque Offerings comparing to the previous releases?

We just made the feel of the overall album more moody. I think this album has a certain dark presence about it. All the music flows with the lyrics and intertwines within each other. It captures the same feeling we did with the Baron Blood EP. The songs are slower but we still have fast and mid paces parts. Our first album Hymns for the Wicked was actually recorded in three different recording sessions. It was really meant to be two demos at first. We did the new album in one long session over the course of four months. Everything works for me on this album. The intros, the creepy samples from old horror movies, the lyrics, the guitar solos... we really took our time with this album.

When composing and putting ideas into flesh - do you have a formula or maybe some kind of a ritual that works for you every time, or is it more of an instinct that you follow and let ideas flow and materialize?

We come up with the music first. All the guitar parts and drums are worked and arranged. Then we start writing the lyrics and guitar solos. There is really no ritual, just a certain pattern we follow when writing and recording. It takes months to jam the new songs before we even record, so we are tight on the parts.

Which song gave you the most trouble and why?

It's all the real slow songs like 'Creature Feature' and 'Night Gallery'. Not because the parts are hard… it's because when you play slow you hear all the mistakes and nuances in the recording process. For example, the microphones pick up on breathing (when doing vocals), maybe guitar chords fade out too soon or a string pops... shit like that. Drives me crazy... I just do retake after retake to get it right. Tony also really struggled with the lyrics on 'Evil that Haunts this Ground'. It's a long song with so many parts to sing over and come up with original lyrics... but he did a fantastic job.

Which one was a breeze to finish and record, why do you think that was?

'Black Candle Séance' since we've played it for years. 'House of Dripping Gore' was easy just because it was the first song we wrote for the album.

New album cover is as doom as they come, and this time you decided to go with some color. Can you please tell us about the choosing of an artist, the artwork itself and the whole process?

I'm a huge fan of Daniel Corcuera works. He's done so many great, great Black and Death metal covers. We've been in touch for years. I wrote to him asking if he'd do the new Druid Lord album. It took time as he's got a busy schedule, but he agreed. The concept did not come easy at first and we tossed around some ideas. Then I had the idea of Skeleton Knight being a part of a ritual to bring back a dead king. From there it just took its own form. Daniel did a great job with the colors. He came up with the concept for the back cover.

New album has been out for more than two months now. Response has been good from what I see. How does it feel to know you did well, what is the best thing and the funniest you've heard about the album so far?

People like the new direction… the heavy but still fast parts thrown in. Fenriz played us on his radio show a few weeks ago and seemed to like a certain drum break our drummer did in 'Evil that Haunts this Ground'; he even pointed it out as the song was playing… that was damn cool.

Your new drummer Elden Santos is relatively new to the band. How well did you know him before he joined, how did it happen, why did Steve Spillers split?

Elden was in some local bands here in Orlando, and a good friend of ours.  Druid Lord played with some of his bands at various times. When Steve left, Elden was our first choice. He learned the songs in one week. Elden is a metal freak, who is into black, death, and doom metal. We knew he was our guy. Steve is a great drummer too. The hard part of losing Steve was that he and I started this band. We had an idea and went with it. Unfortunately, Steve lived over 4 hours away. We made it work in the beginning but after a few years it started taking its toll. Some of our live shows were suffering and this caused some tension in the band. Steve left and that was about it.

Second guitar is Ben Ross and he’s also 'back' in the ranks, what happened there, what's the story?

Ben had some personal matters to take care of… that's just the deal. We all have jobs, families, personal shit to deal with... it's life. We respected his decision. Chris from Killing Addiction joined us until Ben came back.

It may be too early to ask but what are your long term plans and goals, can we count on more regular releases in the future?

Get more recordings out. I want a new album out by this time next year. So I'm already getting music part together. Get on the road. Druid Lord must get to Europe. We need the right contacts.

Hells Headbangers Records is a new label for you. How is the collaboration going so far, are you satisfied with what they do, why them?

Hells Headbangers is a very cool label to work with. No bullshit. Everything they told us we got. They were very respectful of our music and artwork, especially putting out a double LP. The promotion alone was worth it. We had offers from other small labels, but HHR is a label we like and trust. We are all fans of bands they sign so it just made sense for us. Also, HHR being in the US was a big selling point.

Most people think that metalheads only listen to metal. What is your opinion about this statement and how open are you yourself to different kinds of music?

I've very open minded as a musician. My mother was a classically trained pianist. Growing up we had a lot of Classical and Jazz music playing. I still listen to Bach, Mozart, Listz, Wagner… all the greats. Jazz… Wes Montgomery, Stanley Clark, Chic Corea. I'm a big fan of 70's prog and electronic music. The dark stuff like Pulsar, Sensations Fix, Klaus Schultze, Tangerine Dream, and a ton of obscure bands.

What do you listen to lately?

Check out this scenario. You meet investor with pockets full of money and he offers to pay for a video to one of the songs from new album. Which song are you choosing and what’s in the video?

'House of Dripping Gore', 1st new song we wrote for the album and it's got all kinds of mayhem going on. Since the song is about HH Holmes, you can imagine a house (castle of sorts) of horrors. The victims are lead into a maze of torment... All the way up the screams at end of the song... Hook me up brother!

Thank you Tomek and Metalbite for taking the time to ask these great questions. Support the scene!!!! If you need merch and updates check out our Facebook page and www.druidlord.com Keep an eye out for us this year and if anyone wants DL in your city - hit up your promoters to make it happen. Cheers!