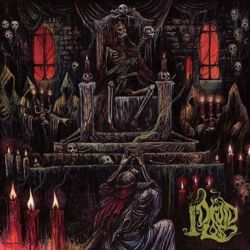 Druid Lord's latest work of disgust Grotesque Offerings is a death/doom metal spear. It strikes slowly and deep thus inflicting wounds far beyond convalescence. Druid Lord makes precise incisions into the listener's mind by combining highly melodic riffs, with pummeling drum and bass work. The voraciousness of every note being played summons the impression that Grotesque Offerings may have been entirely recorded in analog.

Druid Lord appeared on my radar when I was browsing through Hell's Headbangers web store. Presented before my untamed, lust driven eyes, was the artwork of Grotesque Offerings which swiftly steered my senses and lured me towards Druid Lord's dark dungeon of dystopia. I refuse to ruin the experience for the listener by revealing the lyrical themes' exact derivatives, however, I will state that most, if not all of it is based on old horror films.The idea of portraying scenes in horror movies through music is a concept I commend and implore Druid Lord to keep embedded within their death/doom metal model.

The opening track is a perilous tale that is perfectly portrayed by the band's musical craftsmanship. Slow heavy drums materialize and a soothing guitar solo sets the tone of the opening song "House of Dripping Gore", which ceremoniously ushers in the hideous scenarios re-animated and unveiled. The Pete Slate and Benn Ross guitar combination have provided the listener with some of the most unforgettable riffs of the album. Songs such as "House of Dripping Gore", "Murderous Mr. Hyde" and "Black Candle Séance" display patience and brilliance when inscribing or carving the guitar notes onto a blank slate, in hopes of achieving an everlasting impression.

The drumming throughout the album is particularly slow with some occurrences of mid-paced sections. There is a very thrash metal style of drumming present on "Last Drop Of Blood" more towards the middle of the track and lasts for less than a minute. I enjoyed that sudden shift in speed and ferocity from Elden Santos. The drums are played very vehemently on Grotesque Offerings; there is much feeling and passion evident on each track, thus magnifying the gloom of the doom. Sometimes drummers arrive at the studio just to record their parts on an album. With this attitude, the album suffers tremendously, as most keen listeners of metal can easily identify when the drumming effort appears to be "soulless." One example of this is on Nightwish's 2015 album, "Endless Forms Most Beautiful", (I will chime in on this lazy offering in a future extensive review). That is not the case here, Elden Santos's drumming concretizes the stories being told; each segment featuring his drumming boldly embraces the concepts.

The vocals are easily understood but sound similar to grunts; they do have a doom metal sound due to Tony Blakk's deep enunciation, however; I would have liked a bit more obscurity in the vocal pronunciation, which would have greatly expanded the evil presence of the music being played.

Grotesque Offerings holds up well against many other death/doom metal releases of 2018 and 2017. Each song is bathed in addicting, crisp, guitar, bass, drums and vocal work. The samples from various horror movies are an excellent addition to the music. The samples partially paint a grim picture to give the listener an idea of the scene, then leaves the listener to envision the rest, compliments of Druid Lord's superb musical output. I can't wait to get the vinyl version of the album which is currently available for pre-order on Hell's Headbangers.