Molder is yet another massive dent in the Illinois metal lineage we've grown so accustomed to of late. Meshing death and thrash to a sickeningly hostile apex, this trio of Aaren Pantke (vocals & drums), Ramon Garcia (guitars) and Dom Vaia (bass) took their Act of Revenge demo and created a disturbingly quick buzz in the demo underground. I got to speak to the band and picked their horrid brains about some things of interest. 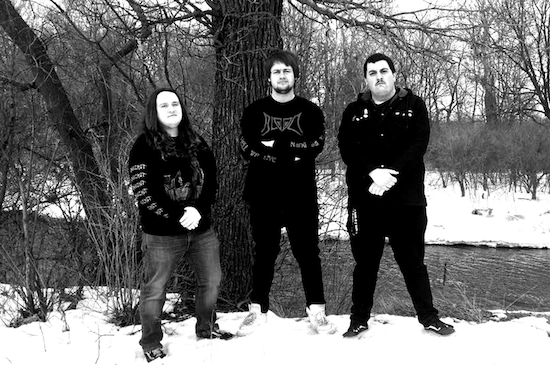 Hey guys. Thanks for the sit-down. First off, man, congratulations on the demo. It's one of the most talked about releases that I can recall in recent years. First, where do you all hail from how did you guys hook up?

Cheers maniac!! We appreciate the kind words. Aaren and Dominic are from Shorewood, and Ramon resides in Joliet. We all previously jammed together in another band, Breaker. With the demise of various endeavors on all ends, we decided to just get back to the Breaker lineup and do something different.

For my ancient ears, this type of thrash / death hybrid is exactly what the underground has been clamoring for, yet never seems to find done to this degree of credibility. What are your collective (or individual) influences?

Thank you! We really all are across the board; from rock, to goregrind, to hardcore, to darkwave…we like a lot of shit! Haha. Huge inspirations for us are our hometown heroes: Cianide, Impetigo, Morgue, Zoetrope, Master, Macabre to name a few, not to mention our love for bands like Autopsy, Asphyx, Pestilence, Blood, Carcass etc.

The social media platform has been rife with praise for Act of Revenge, and deservedly so. Has the reaction surprised you at all or did you know you had a veritable "hit" on your hands?

The response has been huge, and we can't thank you all enough for that. Seriously, you all rule.  However. we can't say we are TOO surprised, as we've all been extremely active in the local scene, and we'd like to think we've paid our dues. People like good shit, and that's what we strive to provide, and, well, the people have spoken.

The demo first appeared as a limited cassette release before being picked up by Unspeakable Axe for a CD release (check out the label's and the band's pages for more info). I'm sure many people are going to want to know why you chose a tape release to start. Was it just a matter of being cost effective perhaps, or maybe just a simple nod back to the golden age of tapes?  They do seem to be making an unbelievable comeback.

Aaren's done tapes forever. His whole collection is tapes. And what's cooler than seeing your own band next to your idols on the tape rack? We all collect them! In the age of overpriced eBay auctions, thats all we can afford! So we'd say its a little bit of both, cost effective, and old school. Who doesn't want more music for less money?

I caught your live set at Que Ball in Burbank (literally played in the back room, ala the old punk shows of yesteryear) and the energy was immense right out of the gate. You also recently played a killer set with fellow Chicago legends Cardiac Arrest, as well as Imprecation and Nunslaughter, and the talk afterward was about how you guys just killed it. Any plans to do any more shows in the near future?

Both shows were truly a blast! Great bands and great friends. It was truly an honor to play with Cardiac Arrest! Their new album, A Parallel Dimension of Despair is seriously remarkable.  Don't fuck up, buy it! Anyhow, we absolutely plan to wear out out welcome!! Expect to see a lot of us. We like to play, and so long as people will have us, we will continue doing what we do.

So as for riding high on the current material, fiends like myself are anxious to know if any new songs are in the proverbial can for another release or are you guys just coasting on Act of Revenge for a bit?

We have a split LP/Cassette coming soon with our friends in Coffin Rot available via Rotted Life Records. We'll have two new tracks, "Condemned to the Catafalque" and "Skulker". As well as our take on Morgue's "Repulsive Death". That should be out sometime later this year. We've also started working on a full length! We hope to have that out through Unspeakable Axe Records and Headsplit Records sometime late 2018!

What made me happy to the core was how the older generation was insanely impressed with the quality of the music you guys created (well-deserved I might add). As a part of that old-fart contingent, I can attest to the fact that we're as elitist and jaded as they come these days. How does it make you guys feel that so many local and outer legends in the scene have heaped so much love and respect for Molder? Does that put any added pressure on your as a unit or do you just roll with it all and go with the creative spell?

No pressure, nothing but love and support on both ends! Brad of Absconder has not only been a tremendous support, he truly inspires all of us to keep it together and keep moving. He hails from our wasteland as well, and seeing he was able to help create Morgue and the legacy they paved, from a place like this truly inspires us. Nothing but love to him and Absconder. Mark and Stevo of Impetigo like us… how fucking cool is that? The coolest, TRUEST goons from the heart of Illinois! And if they dig us, we must be on to something! That's not to mention the relentless support from Scott of Cianide; it's very weird to have your idols acknowledge you, let alone support your endeavors. Tom from Cardiac Arrest has been a huge inspiration as well, so nothing but respect for him!! I can go on and on and on, but at the end of the day, it means more than words to us to have the old school heavy metal maniacs by our side!! Cheers guys!

Back to the demo, where was it recorded? It sounds much better than your average garage demo with just a touch of a nostalgic DIY feel throughout.

That's great to hear! Haha. Our buddy Nathan Treece (Roach Records) came to Aaren's basement with his setup, and we tracked and mixed the whole thing in about 3 hours. So, it is your typical garage recording, just the right amount of polish, and the right amount of filth. We're thrilled with the outcome and thrilled people dig the sound as well.

It's a pretty routine question to ask what you guys foresee for the long-term future for Molder, so I'll fall into line and inquire as where you see the band in, say, 18-months time?

We're just going to catch some tasty waves, man. Ha. In all seriousness, just rolling with the punches for now! You can expect two releases from us during the remainder of this year, and perhaps more merchandise as well. However, our main goal is to conquer Chicago, then beyond. We'd love to play Portland; that's huge for us right now. There is an amazing scene out there, and we need to witness it in the flesh!!

Another routine pedestrian inquiry is probably the most inane question, so forgive me, but are you guys actively looking around at labels to release future material or are you all content with the organic home style for now?

For now, we are working with Rotted Life Records for our split with Coffin Rot. Unspeakable Axe Records has been great to us; they really did the demo justice, and we will certainly continue to work with them. And we look forward to working with the BEST in the west: Dylan and Headsplit Records, as he'll be handling the cassette version of our debut full length. So, not actively looking for another label, but not ruling it out.

Hey, thanks for the answers, guys, and thanks for representing Chicago so well! Feel free to add anything else you wish here, and good luck with all future endeavors!

Cheers Chris!! Keep doing what you do, you have our eternal support!! Thank you to everyone who took the time to read this, pick up a demo, or simply give the Facebook a like. You all will go unforgotten. Cheers maniacs! See you all soon.