Elegis was founded in 2011 by Baron (also ProFanatism, ex Victimized) after his move from Poland to Norway. A long in planning solo projects music is a combination of massive wall of blackened death metal with a serious dose of awesome sounding orchestrations. 'Superhuman Syndrome' is the name of the new full length that came out in 2017, following a 2014 demo release and 2016 split album. Keep reading to find out more about the project, visit Elegis Facebook page to show support, but before anything - visit Elegis Bandcamp page to give it a listen and possibly purchase it for your collection. Go on then! 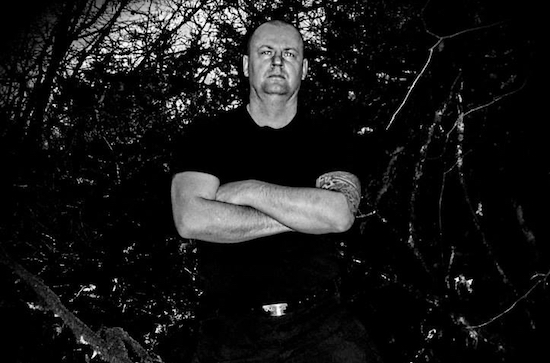 Forgive me if this question is too personal, but why did you move to Norway?

When I visited Norway for the first time, I thought that this would be the place for me and when I got a chance to stay here, I did not think long. 10 years has passed already.

Tell me about it then. Where do you live, what kind of scene do you have happening over there, what about weather, and most importantly - is never-ending winter helping you compose?

I live in the region called Rogaland. Bands as Gehenna, Carpathian Forest and Shaarimoth come from this region. People often ask me about the weather, but it's very similar to many other countries in Europe. A vision of never-ending winters fits more northern Norway, not the south-west where I live.

I've been doing some research but nothing was definite, what is the meaning of Elegis? What does it mean to you?

The name Elegis has existed for a long time. I had a plan to create a band under this name in 1997, and in 2011 I decided to use this name as a solo project. Maybe the present meaning is not relevant, but Elegis is a transformation of the word "Elegies", and represents anthems to dead.

You play in two bands; you've recorded a few albums; what was the spark that got you into metal and how did it start?

Main bands are of course Elegis and ProFanatism, but I also have 2 more side projects. A dark ambient project TRYHM and CODEX NERO which I just begun to create. My first contact with music was to a stronger genre of metal music directly, not through classical rock or heavy metal, and I was only 9 years old. Since then, my interests have grown and metal has been a big part of my life.

Why black and death?

I was always interested in extreme metal, so it was natural that I listened to brutal genres. My first bands were Venom, Kreator, and Sodom etc. The next period was a death metal period with Morbid Angel, Deicide etc. And after the second wave of black metal came, Norwegian especially, my passion has been focused on black metal-scene. So I was always a fan of death and black metal as separate genres.

Let's talk about Superhuman Syndrome. How many instruments were done live on this album?

Everything exept the drums.

What about all the orchestrations, what inspires you? Is it movie scores or is it classical music?

Long time ago, when I played in previous bands, I had a plan to enrich the music by additional sounds and atmosphere, but in those years I did not have the possibility to create it. Except the metal-music, I was also inspired by dark ambient, especially everything from CMI. That's why I have a side project TRYHM. The movie soundtracks always give me inspiration, but all orchestrations are created naturally during process.

I do not have a favorite; every composition has its own story. One tells about conquest, another about the fall, the liberation, the enslavement, the exploration of the unknown or revenge. All connects the entireness, as the chain of human instincts.

Did Elegis and Superhuman Syndrome shape out to be what you imagined it would be?

When I created the music on Superhuman Syndrome I wanted to create several different stories which have the same target, so all songs are connected with the title of the album. So yes, it turned out the way I planned.

If you ever would meet the right people to join the band would you ask them to join?

Elegis will always be a solo-project, and sessional musicians surely could be found. The problem is that it needs a lot of work and time to prepare for concerts, and in the present situation I do not see occasions for this. Of course I wonder sometimes how the music of ELEGIS would sound live.

Do you have the ability to criticize your own creations? Does it help or rather gets in the way?

Everyone is capable of criticism of their own achievements, but if I look at the accomplished music, I treat it as something finished and created in the past, so I concentrate on new creative forms.

When composing and putting ideas into flesh - do you have a formula or maybe some kind of ritual that works for you every time or is it more of an instinct that you follow and let ideas flow and materialize?

The first riffs are created by the instinct. Sometimes I create them by using some rhythm of drums which puts me into trance.The next step is to build the constructions, and next is the arrangement cut.

The cover art of the album is created by my friend Hidden from ProFanatism. This is expression about all the lyrics together and visual form of the music.

I knew what kind of vision that had to be on the cover. I chose the version of a transformed face which symbolizes on one side the purity, the grandeur, the divinity, and from the other, the dark sides of the human nature.

What made you decide to go with a one man show?

With a busy everyday life it's easier with a solo project. Independence gives a bigger spectrum for creativity.

You did some stuff with ProFanatism and one album with Elegis. ProFanatism is black metal and Elegis is considered death metal; which genre is closer to your heart?

I do not have a special one that dominates. I am connected with both black metal and death metal, and to some kind of mix of those two genres.

Thanks for the interest in ELEGIS. For those who are open to the atmosphere in death metal I encourage you to check out  ELEGIS. The new anthems will come soon!