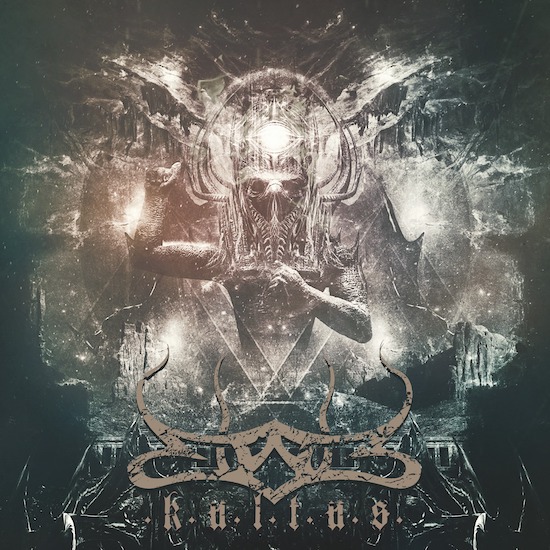 In the last decade or so there’s been a lot of buzz around the whole “death metal revival” trend of newer bands playing old school death metal a la early Death and Morbid Angel, and over at black metal, the Polish scene spearheaded by bands like Behemoth, Mgła and Batushka has caught many a metalhead’s attention. But at the same time not many people seem to be focusing a lot on the Polish death metal scene, case and point, the band Elegis and their independently released second album Kultus.

Now Poland are certainly no strangers to death metal, Vader, Hate and even Behemoth two decades ago, have been the major flag bearers of Polish death metal, and while Elegis is a fairly new band in this scene, its lineup is a trio of seasoned musicians. Originally starting as the solo project of Paweł Baron in which, between 2011 and 2014 he released a steady back catalogue, including a debut record, for this sophomore release, Baron enlisted bassist Krzysztof "Mantas" Ciwiński and drummer Krzysztof Klingbein as full-time members. The first thing to notice of this LP is the particular style of death metal the band plays, in a very stark contrast to the aforementioned death metal revival happening in North America and elsewhere, the band’s sound is distinctively Polish and firmly rooted in much modern times with some subtle touches of black metal in the guitars of main man Baron.

The music is as fast as any straightforward death metal band should be, but the band successfully mixes things up with some dark atmospheres that borrow some elements from harsh industrial music, as well as a layer of complexity in the playing, songs like the title track, 'Apollyon Ave', and 'Luminous Pantheon' have extended ambient passages where the band drops the speed and brutality in order to focus on building momentum and anticipation. The title track takes that even further by being completely instrumental and relying on eerie sound effects and a droning strummed guitar melody which devolves into a riff with pitched open high notes and  drums which start ritualistic and powerful before switching to a marching snare and then back to the primitive pounding through its under 6 minute run time which ends with maniacal laughter and murmuring. The closing track of the album is also a dark ambient instrumental where also the distant guitar melody is accompanied by faint ritual drums and ominous ambience. The rest of songs that are more traditional modern Polish death metal are also noteworthy. The abrupt but well executed tempo shifts from fast to a sludgy mid pace and into the aforementioned atmospherically ritualistic sections on songs can be thoroughly appreciated in tracks like 'I Am A Shadow of Thorns', 'Aeon Omega' and 'Deus Arcana'.

Baron is the main standout of this band, not just with his powerful and surprisingly understandable gutturals but with his guitar skills, even if this album is more contemporary and experimental than the revivalist bands. The man cooked up some outstanding riffs that have a black metal influence with the intense speed and tremolo picking, the guitar riffs of varying speed, complexity and consistently dark and relentless are the best aspect of the album, which unfortunately to the detriment of the other members. I want to stress that Mantas and Klingbein are by no means bad or subpar, on the contrary, the two men perform proficiently on the record. Klingbein in particular being the second standout with his excellent drumming skills, but on the other hand, Mantas’ bass work is almost inaudible throughout the album, which is a shame because the man is a terrific bassist as heard on his other band Patricide, in which Baron also sings and plays guitar. It’s clear that Elegis continues to be Baron’s project and under his sole guidance and direction, and both Mantas and Klingbein are his helping hands in bringing it all together. Another major shortcoming is also that while all the music and performances are solid the album as a whole isn’t that different from other death metal bands, even with inclusion of dark atmospherics and industrial elements. The album doesn’t really break the mold of Polish death metal, it is what it is, and even after spinning the album 3 times it didn’t really stick with me. There is definitely an admirable effort on Baron and co. to be making music primarily for themselves and wanting to maintain the style and sound of Polish death metal, but in pigeonholing themselves into that section, they end up having to take lateral steps instead of moving forward.

Overall while Elegis is a solid band and Kultus is both a solid album with appreciated experimentation, small as it may be, and a worthy addition to the Polish death metal catalogue, it is unfortunately just following the motions. Certainly not without merit and fans of modern death metal will get a kick out of it but fairly standard overall.