Debut album of Unravel titled Eras of Forfeit came out just a little but ago and it's an awesome mix of old school death metal, hardcore and grind. I had a chance to ask Shaun a few standard questions and here is what I found out. Read on. 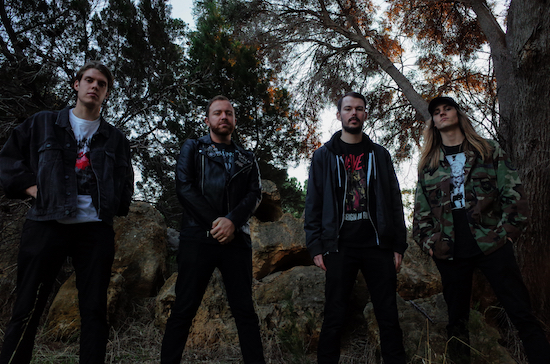 Thanks for taking time to do this interview with MetalBite.com. How hot is The Land Down Under this time of the year?

No problems! It's pretty hot right now for this time of year. Our summer was supposed to finish a month ago and it's currently 35 degrees Celsius.

What a scorcher!! I live in Florida so I know how it feels. How are things in the Unravel camp just after the release of the new album?

Things are good! It's been such a crazy journey from when we first starting writing this new album back in mid 2016 to this exact point in time now, but, yeah, some early reviews for it have been coming in already and the feedback we've received from the has been very amazing to say the least!

What do you consider the most important element in creating your music?

We'd definitely have to say the riffs of course; it's what drives the whole thing. That being said, most of our songs, lyrically, have social/political/ethical themes behind them, and what we believe in as individuals and as a band will obviously differ from what other people believe in, so that’s where the riffs come in. Even if you don't agree with what we're singing about you at least can still bang your head to it!

How do you work on new songs? Do you work on them on collectively in the practice room? Do you share files or is there a main composer taking care of all that happens?

We have a permanent rehearsal space in our city, so it's quite easy and convenient for us to get together to write new songs with one another in person. In saying that, though, usually a new song starts off with someone bringing a drum idea or riff to the table and building off that.

Is everything buttoned up when you go in the studio or there is still room for a little improvisation?

We'd have to say 90% of the material is completed by the time we go to the studio. The other 10% is more than often the fun stuff we get to throw in with the completed material to spice it up a little, like feedback/noise, solos and more.

We feel like the last track on the new album 'Vermankind' represents the new album perfectly considering the song is about us as humans; we're capable of doing both amazing and terrible things, yet it's usually our planet that will feel the brunt of these choices and consequences which, when you think about, it is pretty bad that one single species is capable of doing that to the Earth.

Did you find yourselves employing anything from the previous recordings onto the new one?

Absolutely. Some of the songs on the new album have actually been rerecorded from previous releases (some even goes back to our first demo!) Material wise, however, the new songs just feel like a natural continuation of what we’ve always written and played.

This new album is definitely an Unravel album, that is a fact. Was it easy and natural? Did everything go as planned?

As far as writing goes the whole process went relatively smooth; there were times we had collective writer's block, naturally, and we were forcing ourselves to come up with songs and ideas that felt not up to our own standards. Thankfully none of those made the final cut to the album [laughs]. Other than that we had an issue after the record was completed because we had a sample of Kevin Spaceyʼs character from the TV Show House of Cards making anti-religious sentiments on one track that we felt strongly we had to remove from the new album once his child molestation/sexual misconduct accusations came to light as it would not sit well with a record we wrote about our disgust and hatred of people who exploit other people for their own benefit.

How did you make your decision when choosing album the album cover? Tell us about the process.

We had a few artists in mind to create the album cover, but Dan Seagrave was at the very top of that list just because of his obvious legendary status as an artist when it comes to death metal record covers (and in particular some of our favourite death metal records). In the end we thought, why not go all out for this album even though it's our first and and just go with him with for the artwork? So from there it was just a matter of emailing him in regards to commissioning some artwork, discussing the themes behind the album and what we visually had in mind, and a few months later we had the finished masterpiece, which it is very amazing to say the least!

Whose work do we see on the album cover? How does it correspond to the lyrics and music?

The artist Dan Seagrave is known for creating the album artwork for many legendary and important death records for bands like Morbid Angel, Entombed, Dismember, Suffocation, Gorguts and many, many more. As far as the artwork corresponding with the lyrics and music, we thought it be would be very cool to explore a fantastical view of society, humanity and even the planet itself going to ruin in a post-apocalyptic setting, especially with the ancient-looking towers and spires made entirely from tombstones and vampiric skulls (representing human gluttony and whom it was built upon)

I'm kind of guy that likes to read the lyrics when listening to the album, but unfortunately none of them are available to me at the time. Tell me about the lyrics on the new album; is there a common subject, and who is responsible for lyrical layer?

The whole album is a loose concept of the high costs of everything that humanity takes for granted and takes advantage of in this world - socially, politically and ethically - so themes such as anti-racism, anti-capitalism, anti-religion, gender-equality, pro-vaccination, environmental welfare, animal rights, misanthropy, injustice and hatred of those who exploit for their own selfish purposes are referenced throughout the album. The lyrics are usually written by either Shaun or James (both the guitarists and vocalists of the band).

Heavy, fast and brutal, combined with groove, melody and the old school feel is what I dig the most about new album, and I was wondering who comes up with that stuff? Who brings the riffs and who does the melodies? How does it work in Unravel?

When it comes to writing anything, usually it will start off with someone bringing a drum idea or guitar riff to the table and us building off that. Some of those ideas manifest into complete songs and some other ideas are completed deconstructed and transformed into something else entirely. We're all usually on the same page with what we want our songs to sound like so it's quite easy in the sense that we can produce a number of songs quickly. Sometimes we are our harshest critics and will revisit those songs to see how we can make them the best they can possibly be.

Are you preparing anything special for the day of the release; will there be a video for any of the new songs?

We're playing a record release show in our hometown with some our friends' bands a few days before the release, as well as an online stream of the entire album around the same time, so everyone will be able to listen to it before it finally is unleashed upon the world.

Thanks for your time and good luck with everything.

Thank you for the interview!