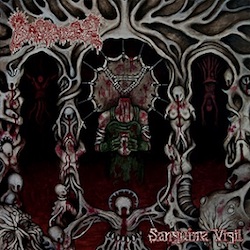 Do you remember those grimy, gory and filth ridden death metal ensembles from the early 90's like early Pungent Stench, Mythic, early General Surgery or Sadistic Noise? Do you miss those days when death-infested grindcore like early Carcass, Nuclear Death, Agathocles and Germany's Blood oozed their primitive noise through your speakers? Longing back to those long forgotten times when labels like Wild Rags, Seraphic Decay and Thrash/Infest Records ruled the underground? Then I've got the band for you!

Galvanizer are a band of young whippersnappers from the country of Finland who conjure up the sounds of those times gone by. And they do it to great effect, I might add. The first time I played this cd I was totally blown away! Old school death/grind intensity, just like grandma used to make! Well, my grandma wasn't into death metal at all but you'll probably get the picture.

After a movie sample (I suspect one of the Friday the 13th movies) the band comes out swinging. Primitive blasting supports the lethal riffing, setting the tone for the grinding death whirlwind that is to follow. The guitar riffing and sound takes me back to the earliest releases by old school legends like Dismember and Entombed, chainsawing it's way through the cranium. The vocals take the approach laid down by bands like Autopsy, Terrorizer and Repulsion, menacingly growling the horrific lyrics. All this is combined in a grimy sort of primordial death/grind that simply oozes old school spirit. The band knows how to keep proceedings interesting by sometimes loosening the accelerator and building in some slower, doomier parts. If I'm not mistaken, I even hear some crustcore influences in the music, like in the tracks 'Deathbeat Deity' and 'Grind Till ... You're Dead!'. Add to this a fitting production for this kind of music and you've got yourself a banger! Shit, these guys just know how to do this stuff right. To top it all off, proceedings come to a close with a cover of the obscure death metal band Necrobiosis. They know where they're coming from, that's for sure.

Apart from the awesome music I also need to mention the layout in the booklet, created in such a way that it resembles how old fanzines looked back in the day. Add to this the great artwork and you have yourself an album that conjures up the spirit of old in a genuine way.

In recent years this style of music has seen a resurgence of sorts, with releases by other players like, among others, Meat Spreader, Repulsive Feast and Cadaveric Incubator and, in my opinion, Galvanizer could be ready to take the lead in this wave. When it comes to old school death/grind these guys have their hearts in the right place. Hearts that are probably pumping black bile but what else did you expect from a band like this?