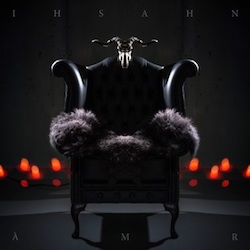 Type: Full-Length
Release Date: May 4th, 2018
Label: Candlelight Records
Genre: Progressive
1 Lend Me The Eyes Of The Millenia
2 Arcana Imperii
3 Sámr
4 One Less Enemy
5 Where You Are Lost And I Belong
6 In Rites Of Passage
7 Marble Soul
8 Twin Black Angels
9 Wake
MetalBite on YouTube

The music that Ihsahn performs is full of variety and vitality.  Amr gets off to a great start with songs like Sámr and continues on a nice path.  There is a large variety of emotions that come to the forefront on this disc.  The band can be scathing, but at other times they are an altogether more gentle beast.

The singing on the album also alternates between harsher and more gentle moments to form a solid springboard for the rest of the performances.  Instrumentally, guitars are solid and form the backdrop nicely for the rest of the material.  They have a sweeping aura to them that is wonderful to behold.  This isn’t really different instrumentally from past Ihsahn discs, however, and makes for more of the same.  Alternatively, there seemed to be unexplored territory to venture to on Arktis.  On here it seems like most of the avenues have been explored to their fullest potential.  Don’t get me wrong, this is still a very interesting album, it’s just that the Ihsahn material is starting to sound a bit samey at times.  The songs sound sort of electronic in nature, but they are definitely more normal sounding that the disappointing Das Seelenbrechen album.  Although the album is good, it is far from the level that Ihsahn achieved on Eremita and After.  This is somewhat disappointing that he can’t match his best anymore and is able to only put out solid albums.

Still, with the lack of bands that sound like Ihsahn, it’s nice to get new material from him whenever we can.  Hopefully, he can venture into his progressive bag of tricks and make something altogether more compelling the next time around.  The amount of quality material that Ihsahn has on offer now surpasses his material from the band Emperor, however.