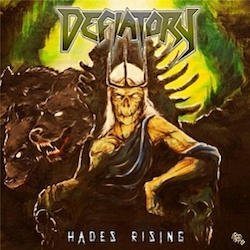 Type: Full-Length
Release Date: May 11th, 2018
Label: Black Lion Records
Genre: Thrash
1 In Hell
2 Dance Of The Dead
3 King In Yellow
4 Stronger Than God
5 Death Takes Us All
6 Morningstar
7 Down To His Kingdom
8 Metatron
9 Bane Of Creation
10 All That Remains
11 Hades Rising
MetalBite on YouTube

Extinct, the debut of Defiatory, came out of the blue and was a powerful kick in the teeth. Therefore, I had great expectations with regard to Hades Rising, but due to reasons unknown, the band has decided to reduce its level of aggression. Thrash metal is still the métier of these Swedish ruffians; however, they are at risk to drift into meaninglessness. Attention boys do not collide with The Haunted.

No doubt, it feels good to listen to many lacerating Slayer-inspired riffs and it goes without saying that there is nothing to grumble about in terms of technical skills. This applies for both, the music and the mix. Hades Rising can rely on a powerful, clear and direct sound. Nevertheless, there are lukewarm parts or even complete tracks ("Morningstar") which lack vehemence. This is a new symptom in the musical cosmos of the protagonists and I hope they will quickly return to the stricter approach of the first album. Fortunately, some elements have remained unchanged, for example the imperious, vigorous and charismatic vocals. Furthermore, some songs grow with each new visit. Just like so many of their compatriots, Defiatory have an excellent grasp of coherent compositions. For example, the chorus of "Dance of the Dead" gives the song a very catchy touch, although its slicing riffs during the verses speak another language. Another brilliant chorus shows up in the dragging "King in Yellow", which has an oppressive, totalitarian aura due to the “Hail" background shouts of an anonymous crowd.

Unfortunately, a few other tracks fall by the wayside. "Death Takes Us All" is too modern and reminds me unpleasantly of "God Hates Us All". The melodic chorus of "Down to His Kingdom Below" reveals the weak point of this track. However, there are still enough outbursts of aggression to push the record to a solid level. Fans of albums such as "Blood in Blood Out" or "Repentless" will immediately start to play air guitar, although it is surely a tough job to copy the mostly effective solos - only the fluffy excursion on "Bane of Creation" marks an exception and reduces the penetrating power of this actually good song. So, no matter from which side one looks at Hades Rising, one thing is for sure: great musicians with an enormous potential were not able to write a flawless work. They meander between their home base (riff-driven, merciless songs that mainly hail the old school) and new territories (less narrow-minded, comparatively soft elements) without knowing exactly the place they want to stay. Consequently, the third album must be the one that gives us clarity as to whether or not these dudes want to start a journey into less combative sections. Frankly speaking, I am skeptical.

When this review was originally written I gave seven out of ten points. But as mentioned above, the album grows and tunes like the title track or "Stronger than God" (two further songs which combine catchiness and harshness excellently) are definitely worth a listen. Thus, I feel free to give a slightly better rating here - and I admit, that I am not that skeptical anymore with regard to the third full-length. Hopefully, the dudes are already working on it.