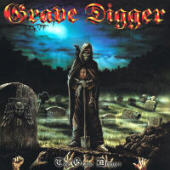 I do not know exactly why, but after the release of Ballads of a Hangman, I decided to stop buying Grave Digger albums. Their "more of the same" dogma had lost its fascination. Moreover, I was, and I am still convinced that they had already published their best work. I am speaking of The Grave Digger, their first album in the 21st century.

First of all, the pretty opulent output boasts with its absolutely outstanding production. It does not lack pressure or density; every instrument is clearly defined and the same goes for the voice of uncle reaper Chris Boltendahl. Each and every band member shows his skills on his personal shovel and due to the experience of the dudes, they leave a very tight overall impression. Drummer Stephan Arnold works like a machine operator, the guitarists impress with really pervasive riffs. "Scythe of Time" relies on such a riff. It flattens the soil in a matter of seconds and develops an unholy mood. The slowly crawling "The House" marks another example for the good guitar work.

Of course, the band avoids any form of experiments and presents conventional song patterns in abundance, but it shows its full potential within the relatively narrow frame of traditional metal. My personal highlights cover more or less the entire spectrum. On the one hand, the band anthem and title track tramples both the living and the dead into their graves. Arnold's almost hyperactive bass drum motivates the other guys to perform a perfectly flowing up-tempo piece with a smooth yet powerful chorus. This deadly weapon shows the speedy side of the guys, while "Funeral Procession", another excellent song that comes directly from the graveyard, represents the typical Teutonic metal sound. Stomping and mid-paced, it rolls over the listener and both its scornful bridge and the intensive chorus hit the nail on the head.

Usually, the hit rate on a Grave Digger album does not exceed 60 or 70%, the sad rest consists of (sometimes terrible) fillers. Just think of their unbearable ballads during the first period of the band. Premature complacency has always been an obvious problem of the band, but The Grave Digger does not give new food to this accusation. This does not mean that the album is completely free from questionable details. Sometimes a stereotyped chorus shows up with quite stupid "fire / higher / desire" rhymes. But generally speaking, the band has forged tracks on an equal footing. It is also a matter of course that Boltendahl's voice delivers a love-it-or-hate-it element and the more it stands in the foreground, the more it has the possibility to ruin a track. But only the ballad (once again!) suffers significantly from his somewhat tantalized voice and this is, by the way, no big loss, because the pretty cheesy and overlong "Silence" is the only flop here.

The digipak ends with the pretty strong "Black Cat". Once again, the voluminous guitars create a sharp and powerful riff that carries the whole track. So, I have no doubt that anybody who is interested in Grave Digger needs to know this album, because it combines the best sound with some of their best songs. Too bad that they never returned to their top form - and that they did not get the right moment to say good-bye.