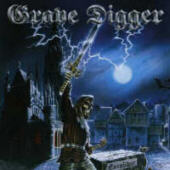 Shit, it’s already 21 years ago that Grave Digger published Excalibur. Honestly speaking, I thought it is less than ten years, but I get older every day and I just cannot trust my brain any longer. Regardless of this miserable situation, my misjudgement is maybe a good omen, because I believe I have just listened to this full-length for a pretty long time. The reason for this is easy, I like this work.

Excalibur sounds crispy and belligerent to a certain extent. The guitars like to attack within the given traditional frame and the riffs do not sound stale, lame or tiring. Of course, the band does not put the focus on profound heaviness exclusively. There are also semi-ballads which add a slightly different flavour. 'The Spell' surprises with discreet erotic allusions (“there in the woods she taught me how to touch a girl” and we are too noble to ask for the exact female body parts) and 'Avalon' would also convince on an album of In Extremo. (That’s probably only logical when considering the bagpipes and the involvement of a guy of the equally “medieval sounding” Subway to Sally.) Furthermore, we have the pretty pompous, slightly kitschy piece called 'Emerald Eyes' or songs that offer a mix of prototypical metal parts and softer elements. This does not work very well in the title track, because the almost dreamy solo is the weak point of an actual strong composition. By contrast, the fragile motif of 'Morgane Le Fay' illustrates that the Germans are generally able to combine differently harsh sections in an intriguing manner. And I should not forget to say that this track is among the highlights of the album due to its tension-developing pattern with the emotional beginning and the relatively harsh transformation into a melodic yet double-bass driven metal attack.

Remarkable is that Excalibur differs from almost any other Grave Digger work. Usually they begin in a strong manner, but as the longer the albums last the more the quality of the songs decreases. It was always more or less predictable that the songs on position seven, eight or nine will fall short of legitimate expectations. The work from 1999 does not suffer from this scheme. Indeed, the 13 tracks are able to keep the quality high and the fleet-footed 'Mordred’s Song' is the best, but not the only good track of the album’s second half. It is based on a catchy and smooth melody which is not at the expense of speed or pressure. Especially this feature gives the full-length its character: the almost flawless integration of sleek melodies into the metallic frame. They never gain the upper hand, because the guitarists seem to be motivated and the drummer fights behind the kit like his favourite football team at the (once) famous Bieberer Berg on a Friday evening. This joy of playing is the basic ingredient for cool headbangers like 'Pendragon' or 'Tristan’s Fate'.

The cover drawing is okay and I am willing to ignore the ridiculous back cover painting. Instead, I enjoy the full, warm and reasonably muscular sound that fits speedy numbers like 'The Final War' (great bridge) as well as the less hard hitting tracks. Of course, even a good sound cannot fully make up for the deficiencies when it comes to the combination of Boltendahl's voice / emotional sections. But he sounds much better than in the ballads of the first period of the band. Thus, Excalibur does not deliver moments of pain, but almost an hour of vibrant traditional metal. So raise your sword, call yourself Sir Whatever-You-Want or buy yourself a book with the most important sagas, but don’t miss this full-length, one of the best of Grave Digger.