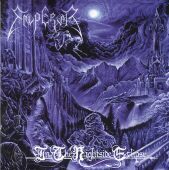 Type: Full-Length
Release Date: February 21st, 1994
Label: Century Media Records
Genre: Black, Orchestral, Symphonic
1 Into The Infinity Of Thoughts
2 The Burning Shadows Of Silence
3 Cosmic Keys To My Creations & Times
4 Beyond The Great Vast Forest
5 Towards The Pantheon
6 The Majesty Of The Nightsky
7 I Am The Black Wizards
8 Inno A Satana
9 A Fine Day To Die (Bonus Track)
10 Gypsy (Bonus Track)
MetalBite on YouTube

The Norwegian black metal big bang covered a lot of facets. Gehenna showcased its sad face, Immortal were responsible for the rumbling part. Ancient spat fire and delivered an eerie touch, Gorgoroth focused on pure brutality and Mayhem added occult vehemence. And what about Emperor? Simply speaking, they lived up to their name. The imperial In the Nighttime Eclipse catapulted them directly to the top. They were the kings of Norwegian black metal, maybe not alone, but in a kind of condominium with Mayhem. They gave the sinister art of their homeland the most intelligent, flexible and musically most valuable face. Already their debut mirrored their overflowing creativity and its only disadvantage was that one thing became quite obvious: the black metal frame could be too narrow for the musicians. I don't say that the nine pieces suffer from an overdose of progressivity, by far not. But all songs are filled to the brim with thousands of ideas. Very good ideas, no doubt about it. It happens a lot - breaks, tempo changes, different atmospheres, different voices, different riffs and melodies. But everything fits together and despite their complexity, the flow of the songs always plays the main role.

A special feature of the album is the perfect balance between guitars and keyboards. The latter are neither mere accessory nor do they claim to be in the driver's seat. They simply add value to songs such as "The Burning Shadows of Silence", just listen to their fragile howling at the beginning of this song. They appear like haunting ghosts that try to take possession of the listeners soul. At the same time, the guitars ensure the black metallic intensity. Not to mention the nagging of Ihsahn. Equipped with a lot of reverb, his performance breathes the spirit of the pioneering days of Norwegian black metal. He combines rebellion, resistance and malignancy in a charismatic way and his sometimes grotesquely distorted, yet extremely grim approach fits the music very well. He delivers the contrast to pretty melodic, from time to time nearly symphonic keyboard-driven sequences - you can verify this inter alia during a melodic part with a Gehenna-esque line in "Cosmic Keys to My Creations & Times". This track offers, like almost each and every song here, the whole spectrum of fury, velocity, harmonies, tragic, occultism and musical brilliance. All tracks are artworks that stand on their own feet and despite their interwoven structures and the homogeneity of this debut, they develop a unique individuality very quickly. No doubt, this matchless document of total blackness yet compositional aspiration has its own (fascinating) character - and this is exactly the feature that so many albums do not have, at least not to this extent.

Emperor are not prone to self-limitation. The pretty soft beginning of "Towards the Pantheon" is nothing that makes the hearts of underground fetishists beat faster. But the degree of heaviness and intensity is growing, slowly, but steadily and, by the way, it goes without saying that this almost solemn start belongs to the most atmospheric moments of the full-length. Of course, the production plays its part in this context. Maybe it is no immaculate mix in objective terms, but with regard to the special requirements of the black sub-genre, it comes very close to the level of perfection. The guitars have the power to hurt the listener with their aggressive basic tone, while the keyboards embrace the audience gently but firmly. The drums do not fall by the wayside, only the bass guitar is slightly sidelined. However, only technocrats will moan about this fact in view of the exciting overall impression. Hard to believe that such competent musicians had a weakness for criminal activities as well. I obey the law (and this is one of many reasons why I am boring, I know.) That's why I condemn their deeds, especially those that Faust and Samoth have done. Yet similar to Varg Vikernes and other scatterbrains, these things do not diminish the excellence of the more or less perfect In the Nightside Eclipse. So, one thing is for sure, without the Norwegian black metal explosion, the nineties, the decade without thrash metal, would have been ten years of absolute mediocrity.

This is definitely my favourite Emperor album. The aggression, the power, the rawness is amazing. Kids, if you are looking for an album to scare your parents, THIS IS THE ONE!!!! From Track 1 until the end it never eases up. Of course "Nightside", being one of the early Emperor albums from the early-days of Norweigen Black Metal, it doesn’t have the slick production from a big studio like its latter relatives, but that’s what makes this album stand out against others! It's not polished, it's not shiny and it sure as hell is not cuddly. It's there to slit your throat, and have you running to Mummy to get your rubber underwear!

After a nice little synth/industrial-type intro, we are hit with "Into The Infinity Of Thoughts" and the screeching lyrics 'As the darkness creeps over the northern mountains of Norway' ...after this you know this is the real thing. The guitars are a total wall of sound, very distorted and surprising simple compared to Welkin and IX, but no less powerful. Most of the lines are doubled and flow very quickly and smoothly. The song structure is also more standard compared to newer Emperor albums. You will hear more parts repeated and the time signatures are pretty easy to keep up with. The drummer on this album is the now famous Bard Faust, who is now in jail for stabbing a homosexual man to death. He was very young at the time of this recording, but displays some very technical and solid drumming. Another thing that stands out is the synth work. The haunting ghost like tones make this a very dark and grim album indeed. Against the wall of guitars they are quite obvious and stark, but fit in with the mood and direction of the album effortlessly. Unlike Welkin and IX in particular you will not find much of Isahn’s classically trained clean vocals, (only in a small part of "Inno A Satana") but instead an album of pure, screeching anger. His rather high pitched voice also stand out against the guitars, but it is this that makes Black Metal stand away from regular Metal. The combination of fast guitar riffs, speed drums and church like synth work mixed with screeching vocals the devil himself would be proud of make this a very intense album indeed. An interesting thing I found is rather than writing lyrics to fit with the music and repeating verse, chorus etc, Ihsahn sings a piece of writing with no lyrical repetitions.

Bottom Line: This is real Black Metal. Not the polished stuff that is coming out these days, this is where it started. It's rough, raw and aggressive. If Black Metal interests you, then this album is a must!!!! And unlike the new Emperor... for this album they still had the corpse paint!!!! (that’s got to be worth an extra point!!)