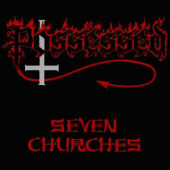 The year is 1985, one of heavy metal's finest years. It was in this year that many bands released their debut albums. Most of these bands played thrash metal. Although you had some bands playing this more extreme form of metal before this year, it was in 1985 that thrash metal exploded. Slayer released Hell Awaits, Metallica released Ride the Lightning, both of which remain my favorite albums by those bands. Celtic Frost, Destruction and Anthrax all released great albums in this year. Then there was the slew of debut albums to hit the record stores. Kreator's Endless Pain, Hirax's Raging Violence, Megadeth's Killing is my Business...And Business is Good, Exodus's Bonded by Blood and S.O.D.'s Speak English or Die to name a few. That year also saw the release of Seven Churches by Possessed.

The argument still rages on to this day of who was the first death metal band. The two bands that seem to be at the fore front of that argument are Possessed and Death. On their debut album Seven Churches, Possessed coined the term with the closing track, simply titled "Death Metal". However, a song title is not responsible for giving birth to a genre, nor is one single band. There are always multiple players involved in these defining moments of history. That being said, Possessed's dark, aggressive, fast and chaotic sound was without a doubt the heaviest of the heavy for 1985. Jeff Becerra's vocals were definitely of the harsher, growling variety and far removed from the standard thrash shout of the time. The guitar tandem of Larry LaLonde and Mike Torrao play a mix of palm muted riffs while being one of the innovators of the tremolo picking style that would become a staple of extreme metal for years to come. The solos are also much different from their peers. There are actual skilled guitar solos as opposed to just hammering the whammy bar. Not to worry, they give fair attention to the whammy bar too. Although Mike Sus doesn't use the blast beat, he makes up for it with rapid shifts of beats and timely fills. His playing is unpredictable in a good way. He throws tempo changes in when the listener is unaware.

Seven Churches opens with "The Exorcist". Keyboards play the theme music from the film as a little intro before pummeling the listener with what feels like an out of key, off time riff and vocal pattern. It then gives way to one of the most memorable guitar melodies of my childhood. Although Satanic themes were common place in metal at this time, Possessed makes it feel real. It's as if they are summoning their infernal master with each note played. All of those notes they play are at breakneck speed as well. Seven Churches is fast, from the opening track to the final one, they never let up on the gas.

Death metal? Thrash metal? Speed metal? Regardless of where you file Seven Churches, Possessed released a truly groundbreaking album. This is the album that extreme metal acts of today should repeatedly reference. What Possessed does that many extreme metal bands fail to do, is create songs. Beneath all the chaos, darkness and speed there are quality song structures here. For it's time Seven Churches is far darker and heavier than anything else that was put out around this time. If you put it up against what Slayer was doing at this time, Possessed is edgier, more extreme and darker. Seven Churches was ahead of it's time and although it sounds dated, come on folks it is almost thirty years old, it has aged very well.