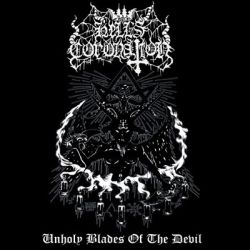 Godz ov War Productions has been promoting exceptional releases as of late. But to release an ep with drooling atmosphere and steady flow from a black metal band, that doesn't need to play lightning fast whilst doing all the generic Darkthrone crap that has somehow become the staple of every lousy alleged black metal band posing to be ‘“trve”, even though their lyrics clearly don't adhere to the laws and philosophy of black metal; is something I hold great amounts of admiration for. Guess how many "dsbm" shit bands have fooled the masses that have labeled them as “satanic black metal” simply because they look and sound evil. Whatever happened to reading lyrics?

Hell's Coronation focuses on ideology, flow and trance more than anything else on Unholy Blades of The Devil. They are not afraid to do what they please in terms of sound. Unlike many black metal bands, Hell's Coronation takes a slow approach to the genre, they break black metal down to the skeletal aspect in terms of musicianship and ideology. Its slow (varies between doomy and mid-paced), lacks any guitar solos, is filled with a strong atmosphere, and just like Nocternity’s ‘Harps of the Ancient Temples’, its one catchy concoction of cosmic caress, especially on the tracks “Satanic Scepter” and “Luciferian Wind Blows From The North”.

There are no guitar solos present on the album, this is kind of a disappointment because I sincerely believe a few high pitched stringed together riffs would have certainly added more depth to the abysmal doomy atmosphere. The vocals remind me of Pestlegion’s frontman, Björn Fratzer. The difference here is, Zepar’s vocals sound like he’s gargling water in his throat whilst singing lines of Luciferian disdain towards the sheeple.

Unholy Blades of the Devil is a very dim passage that continually diminishes visibility as you approach the final 2 tracks. “Luciferian Wind Blows From The North” is the slowest, longest, arguably the darkest (lyrically) and competes with “Satanic Scepter” for having the catchiest groove on the album. The addition of sampled choir passages, groove in well with the pace and immersive atmosphere prepared by the music.

Opening with a short skit of moans during intercourse does justice to the material to follow. Prepare your ears for musical pleasure of pornographic proportions.